People across Asia welcome Year of the Pig 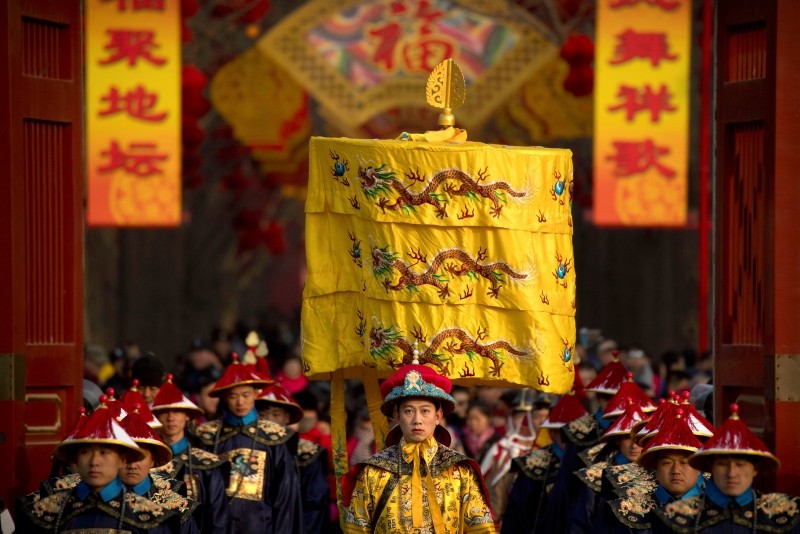 A performer dressed as an emperor, center, participates in a Qing Dynasty ceremony in which emperors prayed for good harvest and fortune at a temple fair in Ditan Park in Beijing, Tuesday, Feb. 5, 2019. (AP Photo)
by Daily Sabah with AP Feb 05, 2019 12:07 am

Pigs are believed to be diligent, compassionate and generous. They have great concentration: Once they set a goal, they will devote all their energy to achieving it. Though Pigs rarely seek help from others, they will not refuse to give others a hand. Pigs never suspect trickery, so they are easily fooled.

Pigs are generally believed to be relatively calm when facing trouble. No matter how difficult the problems Pigs encounter, they can handle things properly and carefully. They have a great sense of responsibility to finish what they are engaged in.

Asia welcomed the lunar Year of the Pig on Tuesday with visits to temples, family banquets and the world's biggest travel spree.

Celebrations took place throughout the region, from Beijing and Seoul to Hanoi and Singapore.

The streets of Beijing and other major Chinese cities were quiet and empty after millions of people left to visit relatives or travel abroad during the year's biggest family holiday.

Families gathered at home for multigenerational banquets. Companies, shops and government offices closed for official holidays that ranged from two days in South Korea to a week in China.

The holiday in mainland China is marked by the biggest annual travel boom as hundreds of millions of people visit their home towns or travel abroad.

The railway ministry forecast mainland travelers would make 413 million trips during the three-week period around the holiday.

In Bangkok, people lit incense sticks and burned paper money and other symbolic offerings for deceased relatives despite government appeals to avoid contributing to smog.

Some shopkeepers sold symbolic ballots to burn as offerings following official promises of an election this year, the first after four years of military rule.