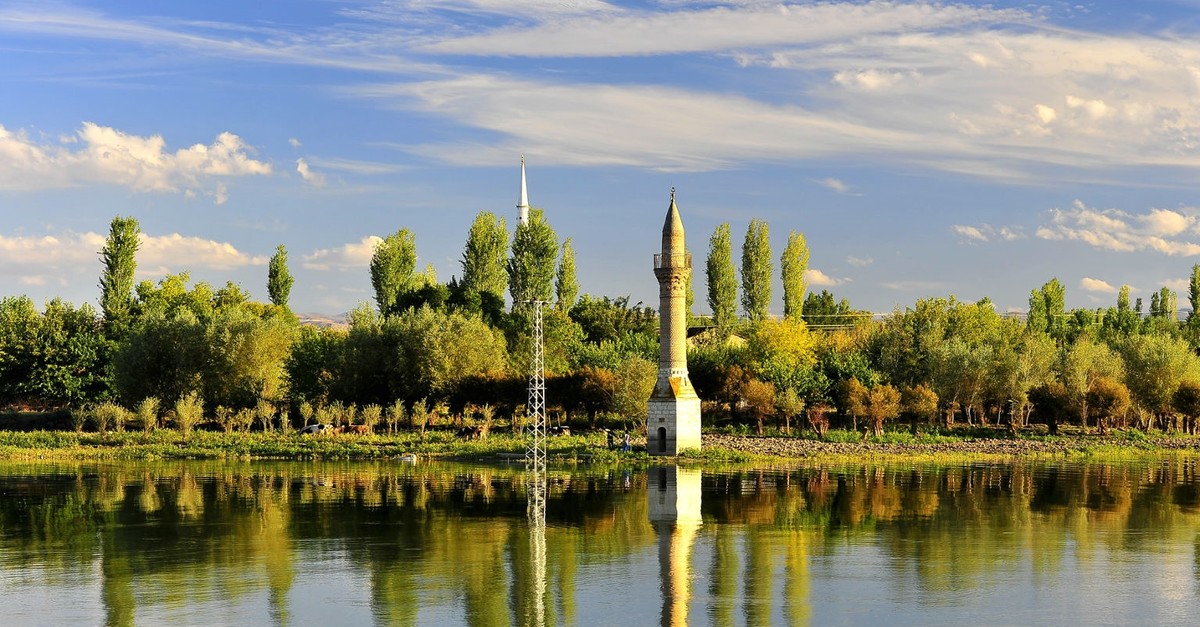 A minaret belonging to a half-a-century old mosque rises from the water. The mosque was submerged by the Karakaya Dam almost 30 years ago, Boran, Malatya.
by İREM YAŞAR Feb 23, 2019 12:06 am

If you like discovering new places with cultural and historical richness as well as trying authentic cuisines, Turkey's Malatya could be an excellent choice

Lying on the westernmost border of Turkey's eastern Anatolian region, Malatya boasts of a rich cultural heritage that dates back to the Paleolithic age. On my first visit to the city, I arrived in a one-and-a-half-hour flight from Istanbul, to attend the 8th Malatya International Film Festival (MIFF).

The city and its people are really welcoming and sincere. If you ever visit the city, you are sure to feel the same. From the beginning, I was lucky to meet people who helped me find my way around the city.

Malatya is surrounded by mountains that are an extension of the Taurus Mountains. Although the grandeur of Malatya's mountains is sure to impresses visitors at first, they are soon overshadowed by Mount Nemrut in Adıyaman, which is a one-and-a-half hour ride away. There are organized tours from the city's Pütürge district to Mt. Nemrut, which is home to a UNESCO World Heritage Site with some of the most glorious ruins from the Hellenistic period.

Back in the city, you should visit the many valleys in the city's borders and have breakfast there, accompanied by some magnificent views. If you come to the city in summer or spring, you will find nature blanketed with green and yellow hues. However, in the winter the region can be a little bit harsh.

During my trip, I also visited the Gündüzbey neighborhood in the city's Yeşilyurt district and had breakfast in a cafe there. It was situated in a wooden building. When I looked at the entrance, I assumed it was really small. But once I stepped inside, its doors opened to a new world. A number of large rooms welcomed us with some magnificent views. I realized later that the cafe looks like the traditional two-story Malatya houses from the outside. I had seen many of them in Yeşilyurt on my way to the cafe.

It is hard to describe all the beautiful scenery in the city in just a few sentences, but I believe it is time to talk about the "apricot in the room." I was really surprised when I first saw that all the places in the city carry the word "kayısı," (apricot). There was also an apricot statue in the city center. I could not understand why the locals gave such importance to the fruit. I later learned that the city produces 90 percent of apricots in Turkey and more than 65 percent of apricots in the world.

Although there are many places in the city where you can buy dried apricots, Şire Bazaar, a century-old apricot marketplace is the center of it all. Here you would feel more like a guest than a customer. After watching an art house film, I decided to go to this bazaar and buy some dried apricots. The sellers were all inviting me to check out their shops. To not waste their time, I chose one of them and entered. They were trying to welcome me in the best way possible. Even if I said no, they offered me a glass of Turkish tea and made me try all of their products. In the end, I bought a variety of dried fruits and nuts, not just apricots.

The shop owner also told me about the local cuisine and after listening to him, I was ready to try all the interesting flavors the city had to offer, which means I immediately went to a famous restaurant that serves local food. In my experience, the city's cuisine combines the vegetables of the region with bulgur and meat. I tried analı-kızlı soup, içli köfte (a variation of kibbeh), ıspanaklı ekşili köfte (sour spinach with meatballs) and kiraz yaprağı sarması (sarma wrapped in cherry leaves). There were many others like kağıt kebabı, yarmacalı pilav and stuffed bell peppers. All in all, local cuisine reflects the city's archaic culture very well.

My next stop was the Culture and Art Street, which was really close to the restaurant. There were many traditional Malatya houses. The Malatya Camera Museum is also located here. The museum was opened by the Malatya Metropolitan Municipality with the help of camera enthusiast Baki Tamer Selçuk.

Unfortunately, my time in the city was limited, and I was following the film festival at the same time. I didn't have a chance to visit Akçadağ, the Onar Rock Graves or Tohma Canyon. However, I heard it is possible to see the traces of the Hittites, Phrygians and Romans in the rock graves. Tohma Canyon is also a hidden paradise with its colorful landscape. So, arrange your schedule well so you have time to visit these must-see places in Malatya.

I also wanted to mention the Malatya Film Festival. The film festival is the largest event in the city and also one of the biggest in Turkey. When I attended the festival last November, I had the opportunity to watch many impressive creations by some world-famous directors.

Throughout the year, Malatya hosts many other cultural and culinary festivals, especially those related to Malatya's apricots. If possible, visit the city during the film or apricot festivals and you'll enjoy your trip to the fullest.