Pioneering women inspire with their stories at summit 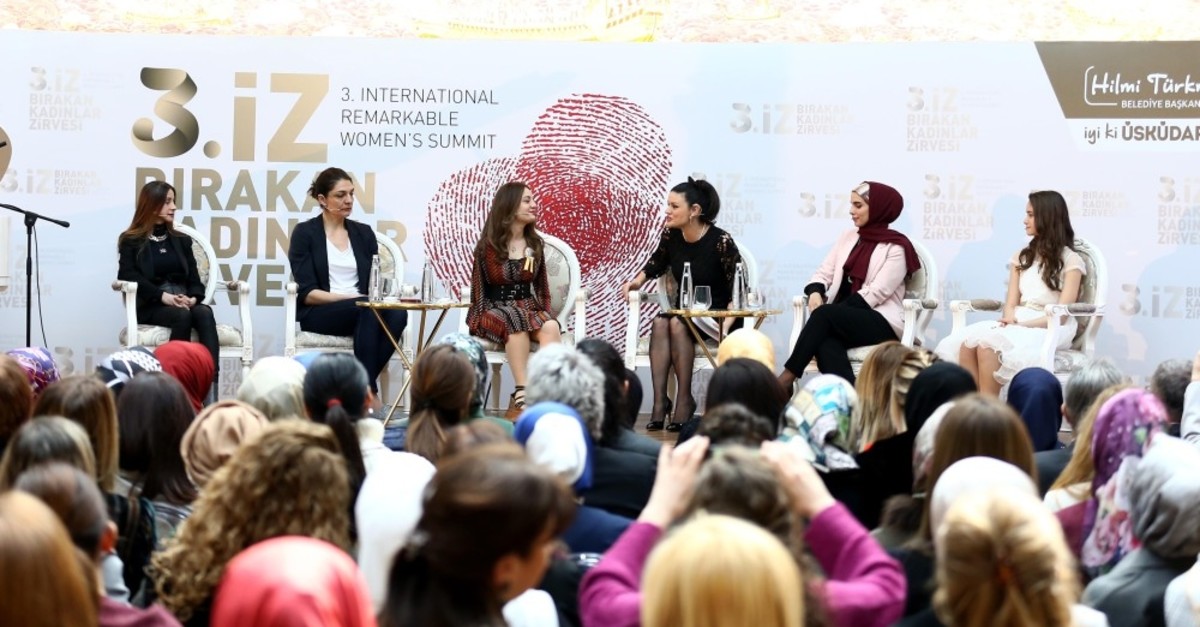 Women have the power to change the world. In the 21st century, women are finally getting the recognition and appreciation they have long deserved and are breaking the glass ceiling placed centuries ago by the patriarchal world order.

Ahead of International Women's Day, women who have done exceptional things in their fields came together for the 3rd International Remarkable Women's Summit organized by Istanbul's Üsküdar Municipality yesterday.

Coming from different areas of life, women shared their stories and spoke about how to make your voice heard in the face of challenges.

The summit opened with speeches by Üsküdar Mayor Hilmi Türkmen and Esra Albayrak, the Green Crescent Board Member and Chairman of the Organization of Islamic Cooperation (OIC) Advisory Women's Council.

Albayrak opened her speech saying that this day, which is dedicated to women around the world, should not have to even exist in an ideal world and said: "Unfortunately this is the trick that the history of mankind played on women."

In her speech, Albayrak spoke about women who changed the course of history with their remarkable success and example. She said the only way for Muslim women to reclaim their place in the world was to rediscover powerful women in both Turkish and Islamic history and learn from their merits.

"Civilization has risen on the shoulders of women. None of these remarkable women worked hard to leave their mark in the world, but [rather worked] for a better world for future generations and to be able to exist in an imperfect world."

Following the opening speeches, the summit moved on to exceptional stories of women.

Starting with her story first, Paralympic swimmer Sümeyye Boyacı talked about how she managed to find her place in the world although she was born without arms. Despite her disability, Boyacı started her journey as an artist who opened international exhibitions, but when she was 5, she began swimming and found her true calling. Eventually, her success helped her secure a place on the national team and the gold medal at the Paralympic European Championship in 2018.

"It is physically and mentally challenging to be a part of the national team, but we as women are capable of anything," Boyacı added. As a hijab-wearing woman in the U.S., Samah Safi Bayazid not only had to face the difficulties of being a woman but also being a hijab-wearing woman. After deciding to wear the hijab at the age of 15, Bayazid started to look for those like her but she failed to find any hijabi woman in pictures and also found Muslim characters in Hollywood depicted as evil or villains.

"I try to tell the stories of hijab-wearing women in America, the stories of children stuck in a war zone or refugees trying to survive in a world that does not want them," said Bayazid, adding that she fights Islamophobia with her work.

"My drive is not to become a successful woman, I want to change the world with the stories I tell. Behind every successful woman there is a tribe of women who support, help and believe in them," she concluded.

The road is rocky for most sportswomen in the world, but the story of retired basketball player Nevriye Yılmaz is perhaps more challenging than others. Born in Bulgaria in a Muslim family, Yılmaz's life was not easy due to the oppression they faced in their homeland. When she was very little, Yılmaz and her family came to Turkey to start a new life. Having started basketball at an early age, Yılmaz always knew that if she wanted to become a successful woman she would have to work twice as hard.

"If you want to make a difference," said Yılmaz, "you have to do it while everyone is sleeping in their warm beds."

Discovered at a very early age, pianist Nehir Özzengin is the embodiment of a self-made young woman. Having started playing the piano at the age of 4-and-a-half, Özzengin won her first international competition at the age of 9 in Belgium. With her success in the 26th International Cortemilia Piano Competition where she came first, Özzengin showed everyone that hard work is key to success. Currently, Özzengin has no conservatory education, but her plan is to continue her music education abroad and return to Turkey to train "young and talented girls."

Ayşe Ören started her journey as an ordinary architect but found herself designing housing for future colonies in space and satellites in orbit. Since crossing paths with Rick Tumlinson of the Space Frontier Foundation and several other space companies, Ören has continued her work in the new and developing field of space architecture.