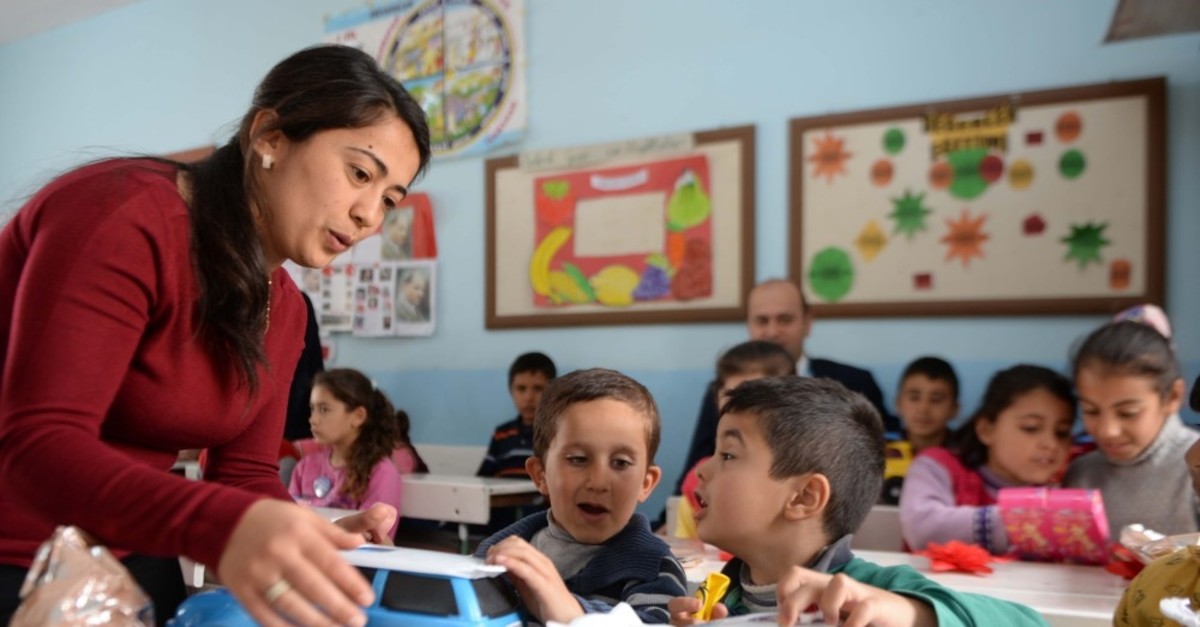 Volunteers gift toys to Syrian and Turkish children studying at village schools in Kilis.
by Anadolu Agency Apr 03, 2019 12:41 am

The southern province of Kilis has been home to more Syrian refugees than its own population since the start of the ongoing civil war in Syria. The city's locals as well as the local government have gone to great lengths to help Syrian refugees feel at home and to help heal the wounds caused by the war. Initiated by the state hospital in Kilis, the "A Toy, A Smile" project aims to put smiles on Syrian children's faces and to introduce them to their Turkish peers through toys. Eight volunteers, including doctors from the hospital, travel to remote parts of the city where Turkish and Syrian children study together to give them toys to play with together.

The project is being carried out by deputy chief physician Nigar Tepe Karakış and child development specialist Ebru Ölmez of Kilist State Hospital. The toys, on the other hand, are purchased with money donated by medical workers at the hospital as well as by volunteers in the city.

Speaking during one of their visits to a primary school in a village in Kilis, the state hospital's chief physician Ali Muhsin Güvelioğlu said they want to increase the power of solidarity among children and to bring them joy.

Güvenoğlu said he tries to visit as many schools as possible outside his work hours, adding: "So far, we have introduced our project to four schools in Kilis and distributed toys to 160 children. They were very happy when we gave them the toys; you could see it on their eyes. We want this project to continue." To celebrate Children's Day on April 23, the top students in the village schools will be invited to the hospital and given a tour.

Karakış said they determine which schools they will visit after speaking with the schools' management. Karakış said after they set a date, the volunteers spend the day with the children and play with them. "On the other side of the Turkish-Syrian border, there is a war going on and it has been hell out there for the last eight years. Kilis, being on the border, is one of the cities in Turkey that has been affected the most by the civil war. In the schools we visited, we have witnessed that Turkish and Syrian children consider themselves brothers and sisters, which makes us very happy," she said.