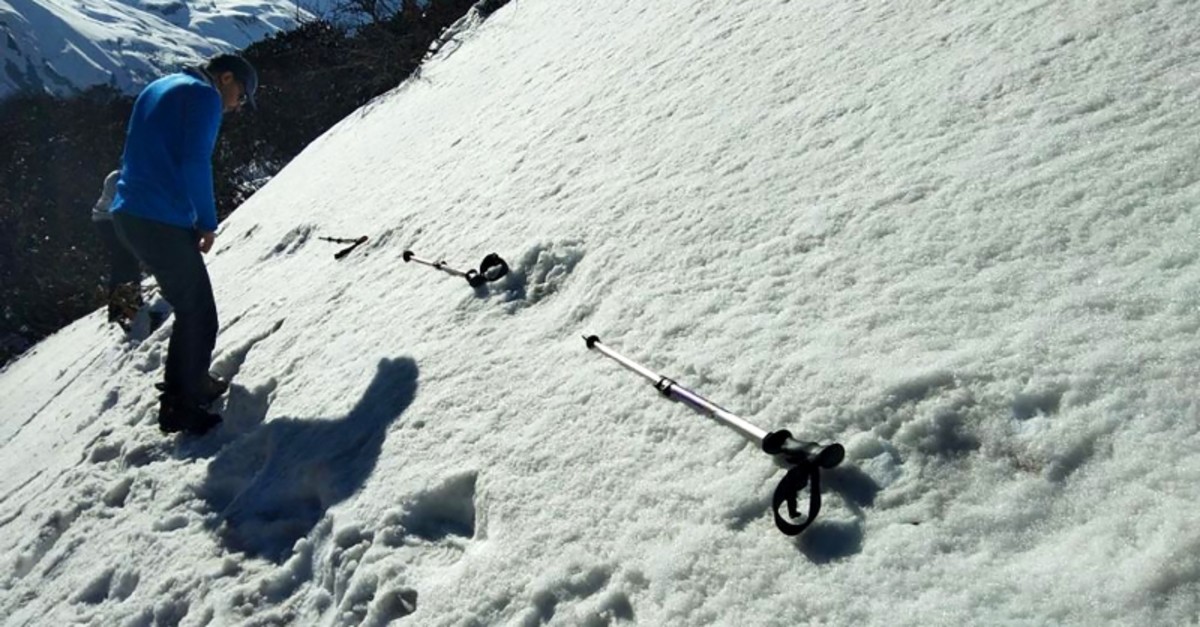 In this handout photo taken by the Indian Army on April 9, 2019, Indian men measure large foot prints in the snow, sighted by the Indian Army, near the Makalu Base Camp in the North-Eastern Himalayas (AFP Photo)
by Apr 30, 2019 4:33 pm

Mountaineers from the Indian army on an expedition in Nepal have found mysterious large footprints in the snow that they think belong to the Yeti, or the abominable snowman, the military said on Tuesday.

Largely regarded by the scientific community as a myth, the Yeti is part of Nepali folklore and is said to live high in the snow-capped Himalayas.

In a tweet accompanied by pictures, the Indian army said it had sighted footprints measuring 32 by 15 inches (81 by 38 cm) close to a camp near Mount Makalu on April 9.

"For the first time, an #IndianArmy Mountaineering Expedition Team has sited Mysterious Footprints of mythical beast 'Yeti'" it said in a tweet, not explaining how a mythical beast could leave footprints.

Located on the border between Nepal and China, Makalu is among the highest mountains in the world and stands near the Makalu-Barun valley, a remote wilderness that has also been surveyed by researchers hunting for the Yeti.

Daniel C. Taylor, who has extensively explored the Makalu-Barun area and written a book on the mystery of the Yeti, said the footprints were likely those of bears.

"If that is the footprint of an animal or a single animal, it's the size of a dinosaur," he told Reuters, adding that repeated measurements of the footprints were required to ascertain their origin.

"One needs to really confirm those measurements of the footprint size because we know for sure that there are no dinosaurs living in the Barun valley."

Tales of a wild hairy beast roaming the Himalayas have captured the imagination of climbers in Nepal since the 1920s, prompting many, including Sir Edmund Hillary, to go looking for the creature.

In 2008, Japanese climbers returning from a mountain in western Nepal told Reuters they had seen footprints, which they thought belonged to the Yeti.

And although they carried long-lens cameras, video cameras and telescopes, they hadn't seen or taken any photographs of the creature.

But scientists have found little evidence of the Yeti's existence so far. In 2017, a group of international researchers studied multiple purported Yeti samples collected from across the Himalayan region and concluded they belonged to bears.

In 2008, two men in the United States said they had found the remains of a half-man, half-ape, which was eventually revealed to be a rubber gorilla suit.