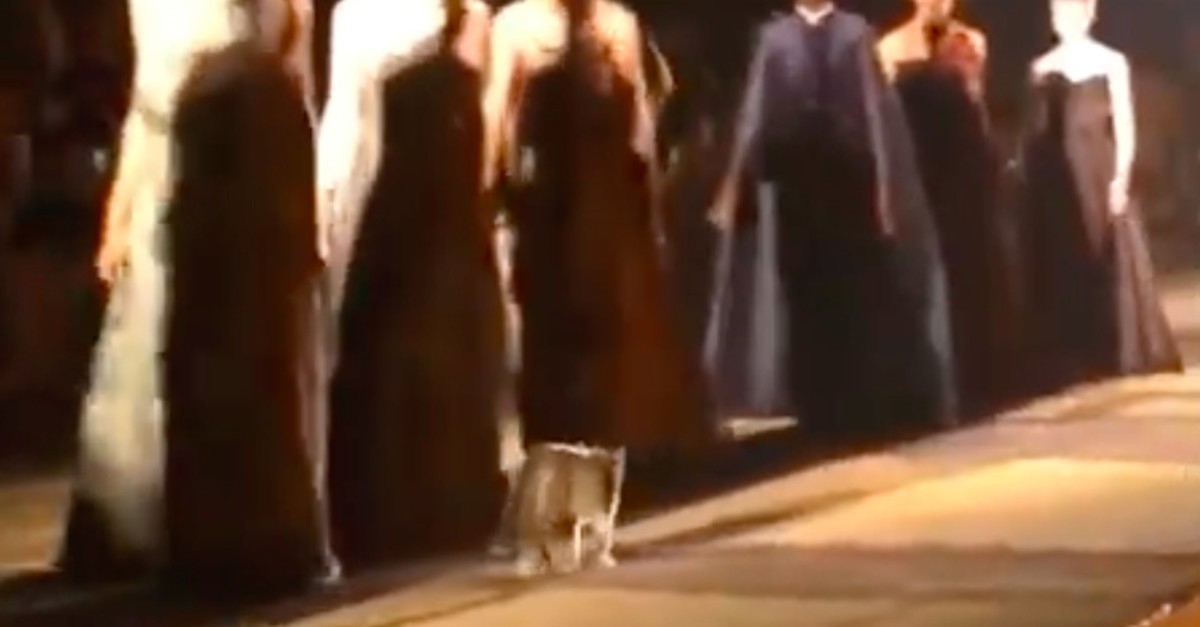 Video footage showing a feline fashionista crashing the runway of a Christian Dior fashion show in Marrakech went viral on social media, entertaining cat lovers from around the world.

Appearing on the runway, the cat walked in the opposite direction to the models wearing the French haute couture designer's gowns on April 29.

The furry animal then crossed the runway and ended up urinating on a female viewer in the front row.

The "Cruise" Collection - hosted outside the usual fashion week calendar, but which is an important source of sales - drew stars including actresses Lupita Nyong'o and Shailene Woodley to Marrakech for the extravaganza.

As night fell over the city's 16th century El Badi Palace and its pool and gardens, models - some wearing bandanas - showcased flowing gowns in maroon or black alongside patterned styles in fabrics from Ivory Coast, fashioned into the brand's trademark synched suit jackets.

Unusually for the French label, it commissioned an Abidjan-based firm to manufacture the cloth, which in its most elaborate form is printed on two sides, and which featured Toile de Jouy-style figures and landscapes Dior is known for.

"You're really speaking about the human touch here, like in couture," Dior's creative chief Maria Grazia Chiuri said in an interview in Paris ahead of the show. The fabrics, found across West Africa and showcasing symbols that are sometimes used as a form of language, had inspired the collection, she added.

Designers Pathé Ouedraogo - or Pathe'O, from Burkina Faso, who is known for dressing Nelson Mandela - and Grace Wales Bonner, a British artist, also worked with Dior on pieces for the show, among other collaborators.

"It helps us to have a different point of view," Chiuri said, adding that fashion was shifting from a time when it only "spoke only with a small audience".

"The way you can speak about the silhouette, the relationship between the dress and the body, and about how you represent yourself, if you see this argument only from one point of view, I don't think it's believable today."

LVMH-owned Dior and other luxury brands are increasingly turning to elaborate or far-flung catwalk displays to emphasize their Cruise ranges, which tend to have a longer shelf life in store than other collections.

With the Marrakech show, Dior also paid homage to the late Yves Saint Laurent, who took on the brand's creative reigns in the late 1950s and was inspired by North Africa throughout his career.

A museum dedicated to the designer, who went on to found his own label, opened in Marrakech in 2017.