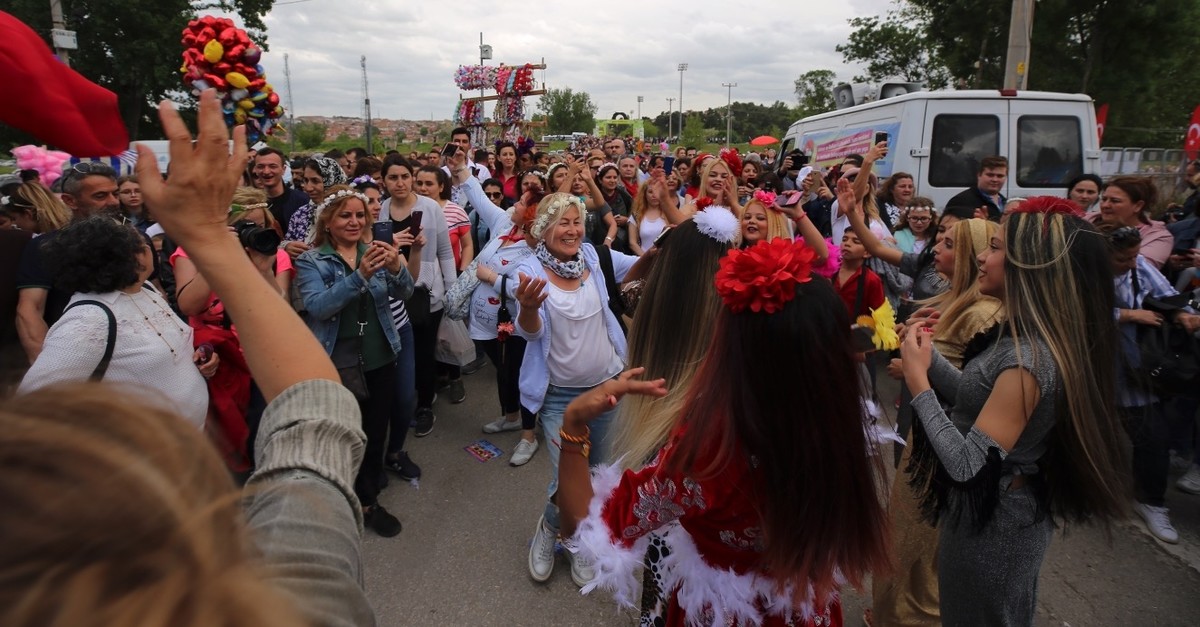 The weather is getting warmer and dark clouds are fading away. It is a bit late, but spring is finally here in Turkey and celebrations are all the rage. Turkey marked the arrival of spring with a traditional festival called Hıdrellez Monday. Highlights of the spring festival were people dancing around bonfires, concerts and a parade of dancers in colorful attire. In the northwestern city of Edirne, a special festival called Kakava was held on the occasion on Sunday and Monday.

Another tradition is writing wishes on slips of paper and throwing them into a body of water, like people gathered on a beach in Antalya or on the banks of a river in Edirne did.

In the southwestern town of Marmaris, thousands, from locals to tourists, lined a 4.5 kilometer beach to collect pebbles and throw them into the sea while making a wish. Others jumped over bonfires on the beach, had picnics, sang songs and danced.

Turkish communities around the world celebrated Hıdrellez on May 6, while Christians in the Balkans mark it as St. George's Day on April 23. There are various theories on the origin of Hıdrellez, according to the Culture and Tourism Ministry's website. While some assert it originated in Mesopotamian and Anatolian cultures, others claim the seasonal festival has roots in pre-Islamic Central Asian Turkic culture and beliefs. It is believed that Hıdrellez is the day when the prophet Ilyas (Elijah) and Hızır (al-Khidr), a major spiritual figure, who are affiliated with the elements of land, water, fire and earth, meet on earth. It is also believed that Hızır and Ilyas are able to meet all the demands of the people, so they write their wishes on a paper and throw them into a sea or river. Hıdrellez was added to the UNESCO Lists of Intangible Cultural Heritage in 2017.

While differing greatly from country to country, the event is often marked by the cleaning of homes and clothes, feasting or ceremonies held near open water or shrines.

Hıdrellez is today a small-scale occasion and though observed, does not have the scope it had in the past - except in one place. In Edirne, Kakava, also known as Hıdrellez of Roma, still draws large crowds. Edirne, like other Turkish cities on the country's Balkan borders, hosts a large Romani population. For the Roma community, the Kakava Festival is more than a celebration of spring: They believe that the awakening of the nature will bring them abundance and blessings. For them, the spring festival is merged with the ancient tradition that takes its roots from a legend called "Baba Fingo." According to the legend, Baba Fingo, the leader of the Romas who were being oppressed by the pharaoh in Egypt, led his people to the Red Sea to hide from Egyptian soldiers and never returned. The legend says he will come to the surface again from a body of water, resurrected, on the morning of May 6. It is not as solemn an occasion as the legend implies though. A string of colorful rituals accompany energetic dances and concerts by the community members. Largely confined to the local community, Kakava has been an international attraction in the past decade and for the past few years, with the number of visitors in the city on the occasion of Kakava substantially increasing. Every year, tens of thousands of people descend on the city to attend the celebrations that continue for two days. Despite rainfall on Sunday night, some 45,000 people gathered in a place called "Inner Palace," an Ottoman-era venue where they participated in celebrations.