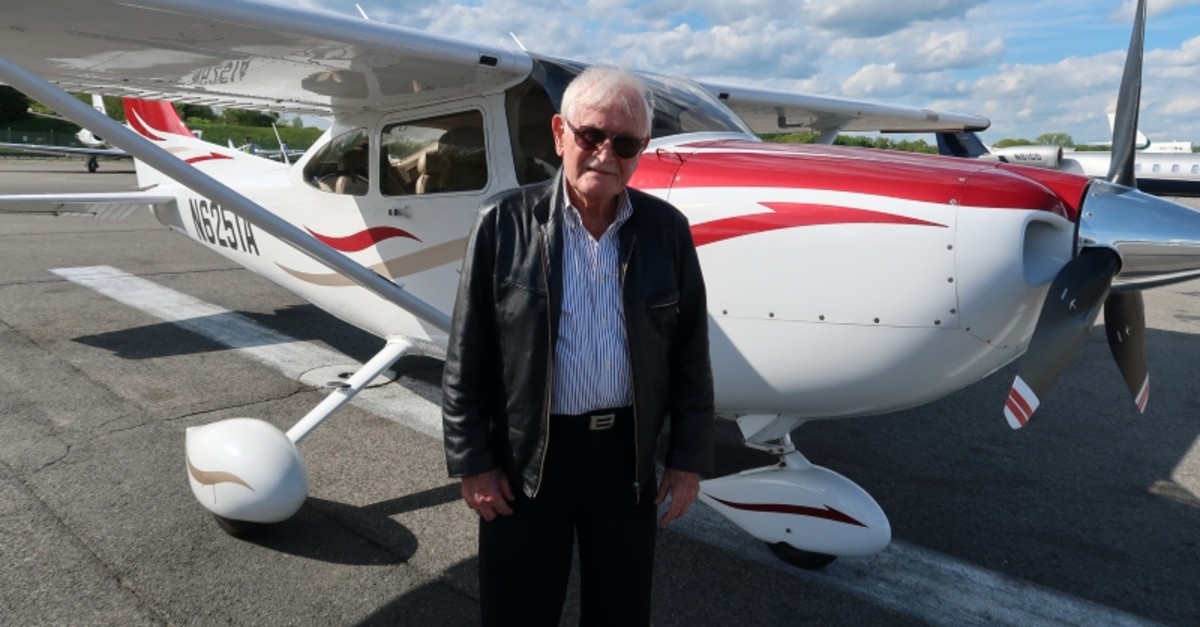 Still flying high at 84 years old, a Turkish pilot living in the U.S. says he has flown all around America, chasing his aviation hobby.

Sevgin Oktay told Anadolu Agency (AA) that his passion for the sky started when he was a young boy watching airshows by pilots at Safranbolu airbase in the northern Karabük province.

Born in Saray district of northwestern Tekirdağ district, Oktay's family settled in Safranbolu district over the appointment of his father, who was a public employee. He studied middle school at the Talas American College in central Kayseri and obtained his high school diploma from the Tarsus American College in southern Mersin province. Upon his graduation, Oktay left his motherland in 1955 to go to university in the U.S., and earned master's and doctoral degrees at Columbia University in New York City.

Taking a job at tech giant IBM, Oktay started working as a technology manager in research and development.

"There was this small airport near IBM, I'd go there during lunch breaks and have half-hour flight training courses," he said. "I got my pilot license in 1968. Since then, for more than half a century, I've been flying."

Saying he was responsible for various divisions at IBM, Oktay added: "I would go to [them] by plane and fly above the company for a short while."

In 1993, when he retired from IBM, he transformed his passion into a business by founding his own company, Oktay Enterprises International. At the firm, he helped customers with business trips as a flying patent agent.

Oktay said he had flown to all corners of the U.S. and its territories, from Alaska to Bahama.

On his flight to Alaska, which covered more than 15,000 kilometers in three weeks, he said: "There was a conference in Seattle, first we went there by plane then moved on to Alaska. It was a magnificent place. We moved towards the polar circle."

Oktay said when he flew near Alaska mountains at an altitude of 6,500 meters, he had to use compressed oxygen. "Pilots need to use oxygen cylinders after 3,000 meters, because human beings can faint if there's not enough oxygen," he explained.

Asked whether he had faced danger while flying, he remembered a near miss at Prince Edwards Island in eastern Canada.

"We were caught by a terrible storm," he remembered. "The weather looked fine but there were black clouds ahead." He said he didn't change course because the flight controllers said there was no need for concern.

"It was raining like we were going through a waterfall. The plane began shaking. If we had turned around, the plane might have flipped over… Then, all of a sudden, all the equipment was out broken… I tried to get our bearings using the old method, a liquid compass," he added.

Guided by light from within the clouds, he said he was finally able to land. "We dodged a close call," he said.

As for charitable work, Oktay along with the Turkish Consulate in New York once presented a Turkish family whose daughter was suffering from a bone disease with a free aerial tour of the Big Apple.

In addition to his flying, Oktay also has an active civilian life, and founded the Turkish Anti-Defamation Alliance (TADA), a group fighting smear campaigns against Turkey over the events of 1915.

"We Turks truly fight against Armenians' smears in the U.S. I've done a lot of research on this subject… They blatantly lie," he said.

Stating that he presented projects to Turkey's New York Consulate, Oktay said he was thinking about producing a short movie supporting the Turkish arguments about that time.

Ankara has repeatedly proposed the creation of a joint commission of historians from Turkey and Armenia plus international experts to examine the issue.