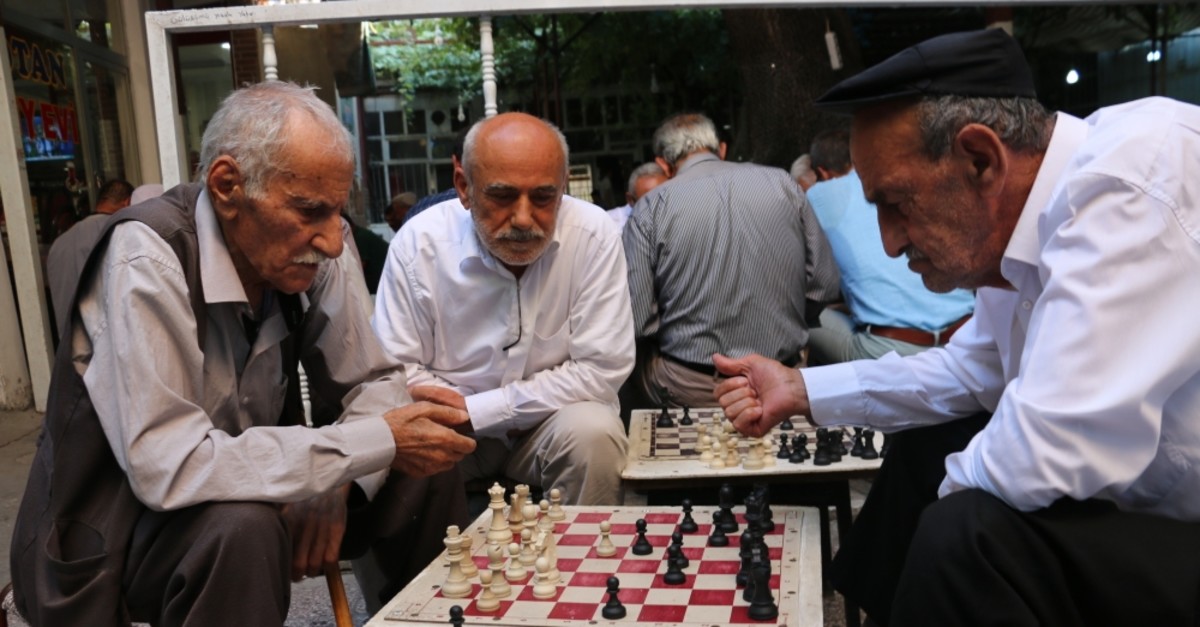 The regulars of the Chess Coffee Shop in Siirt contemplate their next move.
by Anadolu Agency Jul 26, 2019 12:13 am

Coffee shops in Anatolia are places where the locals, especially the elderly, gather and socialize. In the eastern province of Siirt, however, people flock to the local coffee shop not only to socialize but to play chess.

Opening its doors 30 years ago at the Kasaplar Bazaar in Siirt, the Chess Coffee House brings people over the age of 50 together to play chess and other brain teaser games. Everyday local people find a seat and set for the toughest chess matches while sipping from their tea. The locals consider chess part of their cultural heritage and believe that by playing chess for hours every day they set an example for the young.

Some of the matches are so fierce that people gather around the chess players and wait for the next move impatiently. Those who know how to play practice their moves at the coffee shop while those who do not watch the master chess players and learn the tricks. The coffee shop also holds tournaments to increase interest to the game of chess.

İhsan Kılıç is one of the chess enthusiasts who learned how to play at the coffee shop in Siirt. He became deeply involved in the game and devoted himself with such intensity that he became a chess player for the Turkish National Team.

Kılıç first visited the Chess Coffee Shop in Siirt 22 years ago. When he stopped by to have some tea, he did not know that this visit would change his life. Back then, he did not know how to play but when he saw an elderly man playing he started to take interest in the game. "I later learned that there are chess tournaments so I decided to learn chess theories. In the past 22 years, I have won several championships. Now, I am retired but I continue to coach young people and work as a chess referee," said Kılıç.

Kılıç is also the head of the Siirt Chess Youth Club and writer of two books on chess. He said that he is working every day to help people of all ages to love the game of chess and teaching them how to excel.

"Watching the elderly is entertaining. They are very practical and since they play every day they are discovering new moves. They have a system of their own," adds Kılıç.

The 78-year-old Raşit Kezer is one of the regulars of the coffee shop. He i

s a retired construction worker and he learned how to play chess in Şırnak while he was working there. Kezer is a fierce opponent in chess. He has beaten each and every player at the coffee shop, except for one. "I have been playing chess for the last 55 years whenever I have free time. I have won seven cups at the tournaments that I participated in after 50 years old. I come to the coffee shop and play chess every day after the morning prayers," said Kezer.

The 70-year-old Cindi Toprak is another regular of the Chess Coffee Shop. He said that he learned how to play chess watching his grandfather who played the game until he died at the age of 100. Toprak said that young people should not spend time in front of the computer but come to the coffee shop and watch the elderly to learn the tricks of chess.

"Chess is a passion," Toprak said and added that they invite people from neighboring cities to play the game as well.