Canadian shipwreck could shed light on secrets of lost expedition 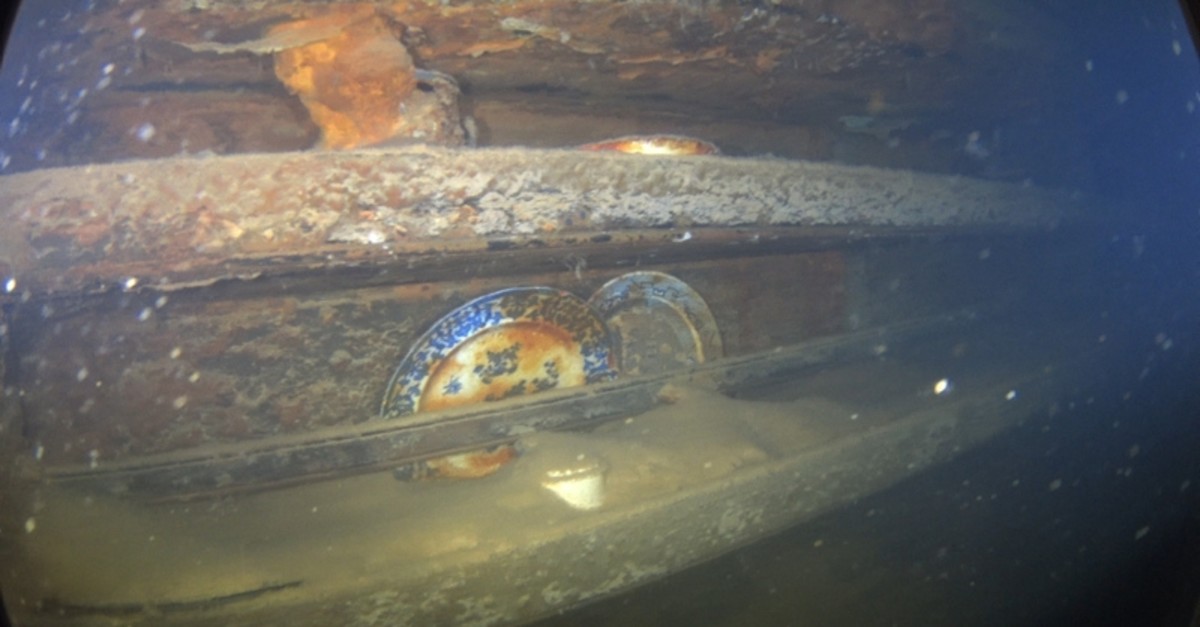 This handout image obtained August 28, 2019 courtesy of Parks Canada Agency shows plates and other artifacts sitting on shelves next to a mess table where a group of lower-ranking crew members would have taken their meals on HMS Terror (AFP Photo)
by Aug 28, 2019 11:19 pm

Almost two centuries after descending to its watery grave, the HMS Terror could offer up new clues to its demise -- and solve one of the most enduring mysteries in the history of Arctic discovery.

Canadian parks department officials announced Wednesday the results of a survey of the shipwreck's near-pristine interior -- and revealed that artifacts preserved in the deep might help explain what happened to the polar exploration vessel.

The Terror vanished alongside the HMS Erebus during explorer Sir John Franklin's storied Arctic expedition that left Britain in 1845 to discover the Northwest Passage linking the Atlantic and Pacific Oceans.

After passing two whaling boats in Baffin Bay in August of that year, the ill-fated ships would never be seen afloat again.

The Erebus was found in Victoria Strait in 2014, while the Terror was located under 24 meters (80 feet) of water two years later in what is now known as Terror Bay, off King William Island, Nunavut.

Underwater archeologists spent seven days exploring the Terror this summer and in a statement said they were stunned to discover its "extraordinary state of preservation" during the dives.

They believe that the captain's desk, map cabinets with closed drawers and boxes could contain charts and logs preserved by the cold deep water, which may shed light on what exactly happened to the expedition.

"Sedimentation provides the best conditions for preservation as it allows for an environment with less oxygen, which helps preserve organics, like paper," the statement said.

Project director Ryan Harris told a news conference the prospect of learning its secrets from what was left behind was "very tantalizing."

"Written materials could shed all kinds of light on what happened, the chronology of events, when the ships parted company and how they got to where they were found abandoned," he said.

Harris noted that the ship was upright on the seafloor, its propeller in place. No anchors were deployed, and skylights were not boarded over to protect from harsh Arctic conditions.

"It looked like it was in operating condition, and suggests with other clues that the ship sank unexpectedly and was deserted very, very quickly," he said.

The archeological team earlier this month "focused on 3D structural mapping and exploring the interior" of the Terror during the first systematic exploration of the vessel.

They obtained clear images of more than 90 percent of the lower deck, which includes the crew's living quarters.

Only the sleeping quarters of Captain Francis Crozier remained inaccessible, behind a closed door.

Video shows beds and desks in place, shelves with plates, glass bottles, tumblers and stemware in what is believed to have been the officers' mess pantry.

Rows of shelves with plates, bowls and glasses -- all intact -- can also be seen in the common sailors' quarters.

Sediment that seeped through the stern gallery windows covers most of the captain's cabin. A tripod and a pair of thermometers were identified there.

Harris said the team hopes to return to the site next year to resume exploration of the vessel.

When the two ships set sail, they were well-equipped and prepared with stout, iron-sheathed hulls and steam engines, and enough food and supplies for three years in the high Arctic.

Following their disappearance, a vessel chartered by Franklin's widow Lady Jane in 1859 came across a grim message on King William Island: Franklin and 23 crew members had died on June 11, 1847, in unspecified circumstances.

It seems the ships had become stuck in ice and, on April 22, 1848, 105 survivors left in an attempt to reach solid ground on foot, but none survived.

Canadian researchers in the 1980s said the remains of expedition members found on Beechey Island indicated they had died of cold, hunger and lead poisoning from canned food.