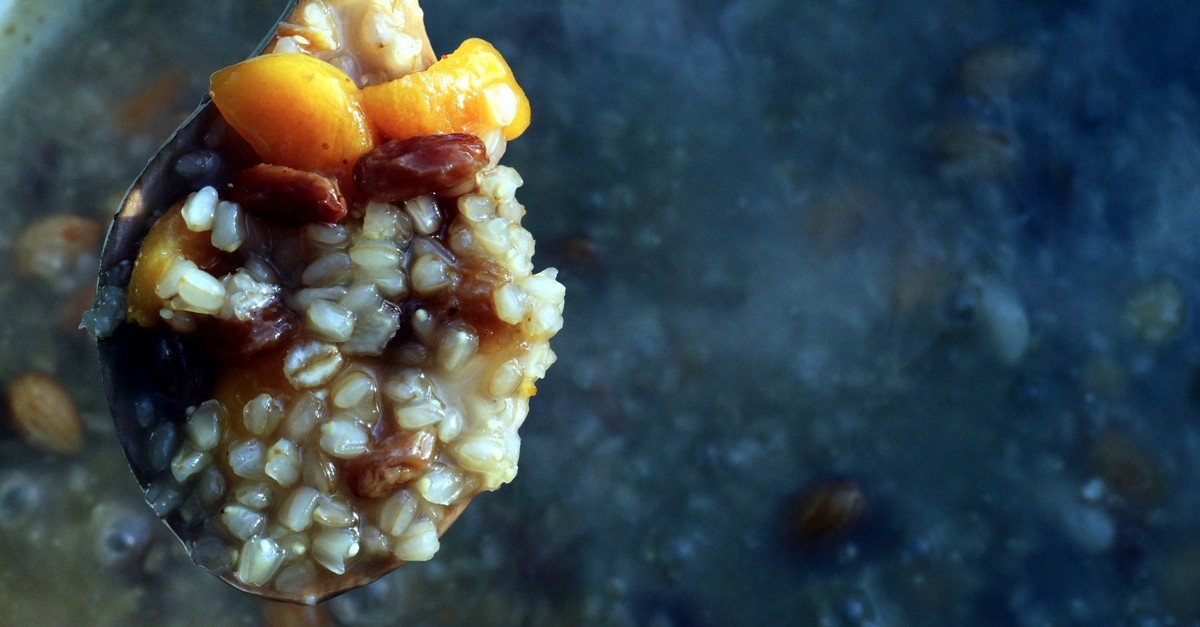 Ashura, a traditional dessert containing cereals and dried nuts cooked in a large vessel is much more than a delight; it has become a ritual inspired by religious narratives

Sünbül Efendi Dervish Lodge distributed ashura, a kind of traditional soup-like dessert made with cereals, to Istanbulites yesterday. By doing so, the lodge keeps a tradition alive.

In past times, the ashura used to be cooked on Muharram 9, the first month of the Islamic calendar and offered to the Istanbulites on Muharram 10.

The Sünbül Efendi Dervish Lodge is known as the "Karbala of Istanbul" as the graves of Fatima and Sakinah, daughters of Prophet Mohammed's grandson Hussein, are neighboring the lodge.

Since the conquest of Istanbul, mevlid recitals and prayers have been conducted for the memory of Karbala martyrs and Husayn ibn Ali.

Sünbül Sinan Dervish Lodge is one of the oldest lodges in Istanbul and considered to be the central one, so the first ashura was cooked there. The cooking ceremony was accompanied by prayers and hymns. After the dessert rested for one day, it was distributed to the people. The tradition lasted for around five centuries during the reign of Ottoman Empire.

With the advent of the law ordering the abolition of lodges and hermitages in 1925 in the Turkish Republic, the tradition experienced an interval. Later it was revived through the efforts of the Human and İrfan Foundation. The foundation has reached old people who witnessed the times the ashura was cooked in line with the original deed and recorded all details known. According to the information gathered, the foundation meticulously conducts each and every step of the ritual from washing the cereals to the prayers to be said while throwing them into large vessels, from what to wear during the cooking to hymns and eulogies to recite.

Dessert with a long history

Ashura (pronounced ashure), otherwise known as Noah's pudding, is a Turkish dessert with a unique story. Known as the oldest dessert in the world, Turkish legend has it that it was actually Noah who made this pudding first - hence the name. According to the legend, when the ark of Prophet Noah landed on Mount Judi on the 10th day of Muharram, there was not enough food left with them. Noah asked his family to bring all the food items remaining on the ark to prepare a sweet soup by mixing them all together. Ashura symbolizes the celebratory meal they made when they came off the ark. Since then, Muslims have been celebrating the 10th day of Muharram to commemorate Noah's survival from the flood by making ashura and sharing it with family members and neighbors. The word "ashura" takes its root from "ashur," meaning "10th" in Semitic languages.

What is interesting about ashura is that the dessert is uniquely rooted in religious history. Islamic sources recount this day as the day when Prophets were relieved from all their distress. It is said that on the Day of Ashura God forgave Adam, Noah's Ark rested on dry land, Jonah got out from the belly of the whale, Abraham survived the fire of King Nemrut, Idris ascended to the sky, Jacob finally could see when he reunited with his son Joseph, Joseph came out from the pit, Job recovered from illness, Moses passed through the Red Sea and Pharaoh drowned, and Jesus was born and rose into heaven. Hence, the Day of Ashura is very important in Islam.

When Prophet Muhammad was in Medina, he saw that Jews were fasting. He asked the reason for their fast and they said: "God saved the Israelites from their enemies on this day. To show his gratitude, Moses fasted on that day." Upon this answer, Prophet Muhammad said: "I am worthy of doing the same thing that my brother Moses did," and fasted. Afterwards, fasting on the Day of Ashura became a Sunnah tradition.

The Day of Ashura is also the day when the prophet's grandson Hussein ibn Ali was martyred in Karbala by the government's forces on his way to Iraq as he was believed to be attempting a rebellion. As the men who invited him to their lands and ran away without helping him, Iraqi people mourned Ali on the Day of Ashura. This tradition is still alive among Shiites in Iraq and Iran, however mourning is not a part of Islam. Shortly, this is a day remembered by all Muslims, Sunni and Shiite, to bear witness to the history of the prophets and mourn the terrible tragedy of Hussein, the grandson of the Prophet Muhammad. It offers lessons for justice, forgiveness and unity for all.

In Ottoman society, the dessert was traditionally distributed to neighbors, at least to seven homes. Some numbers, like seven (as a prime number), are believed to have special meanings. A week has seven days and it is believed that the earth, the heavens and hell have seven levels. During the hajj, pilgrims circumambulate the Kaaba seven times. Again in the hajj, the ritual of stoning the devil is practiced by throwing seven stones.

In certain areas of Anatolia, ashura is more liquid and is called ashura soup. It is made in large boilers and distributed to everyone. Ashura soup is very nutritious and delicious, but is difficult to cook. People try to add seven different ingredients at least. Coarsely ground wheat, chickpeas, beans, rice, apricots, grapes, berries, plums, figs, peanuts, orange peel and apples or pears are added into ashura. Ashura is decorated with pomegranate seeds, currants, walnuts, almonds, hazelnuts and cinnamon.

The ingredients need to be cooked for different amounts of time and separately. It is necessary to stir it in a proper way as well. Sugar is added in the last phase and then it is cooked a little more. It is then served in cups. If excessive sugar is added it will be too sweet, and if sugar is insufficient, its taste will not be as desired. Other ingredients like wheat, beans and chickpeas should be cooked well because they might not be completely cooked and ruin the dessert's taste. They should not be overcooked either. The taste changes if any ingredient is missing.