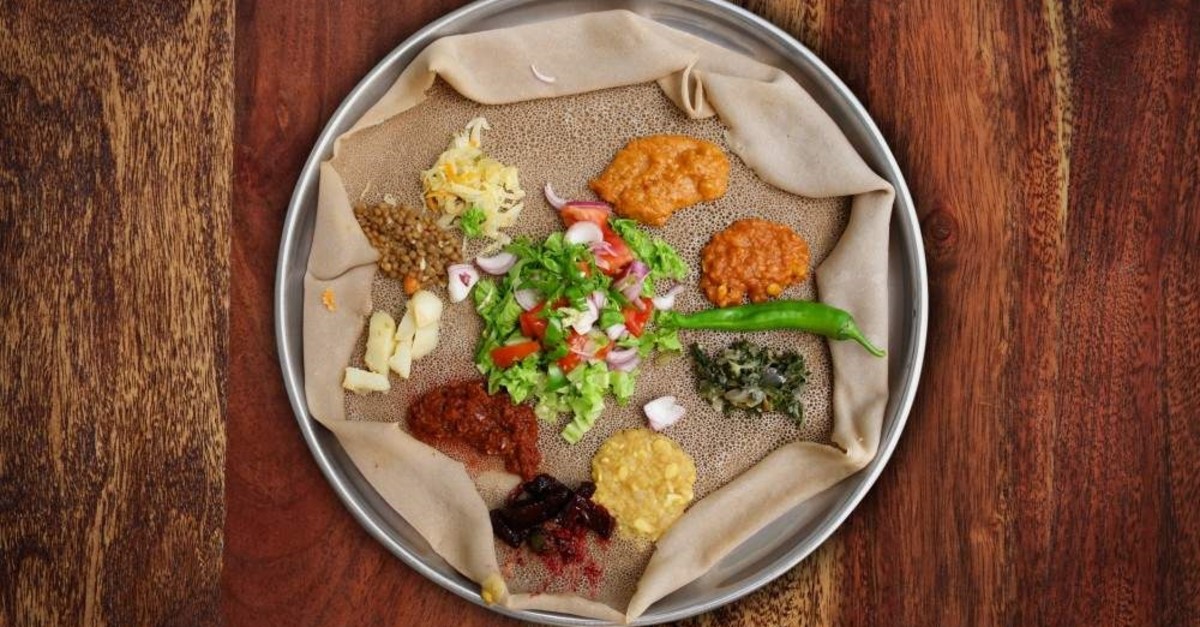 Injera, the national dish of Ethiopia, is a sourdough flatbread made from teff flour. (iStock Photo)
by Anadolu Agency Dec 19, 2019 5:05 pm

As dusk falls in the Turkish capital Ankara, two Somali restaurants near Kızılay city center come to life. Although they open to customers early in the day, they turn into a home away from home for African students in the evening.

A rendezvous for the African community and a place to escape from the freezing Ankara temperatures, students, tourists and entrepreneurs gather for conversation thousands of miles from their continent, tasting bites of Sambusa – a triangular fried pastry dish filled with spicy minced meat – and sips of Somali tea in colorful cups. Somali, Ethiopian and Yemeni songs set a familiar backdrop for enjoying the foods of home.

An enchanting part of these restaurants is that they are owned by 28-year-old entrepreneur Mohamed Issa and two of his friends, all of whom graduated from Turkish universities.

Issa and his friends came to Turkey eight years ago to pursue their studies. After graduating with degrees in labor economics and industrial relations, Issa also received a master's degree in management.

Issa had the idea to open an African gourmet spot after running from pillar to post in search of food from home, soon after he arrived in Ankara to study. A foreigner can eat local food for a while, but not all of the time, he said.

"We noticed there were no restaurants around that served Somali, Ethiopian or even Yemeni food. So, we decided to come together and open a restaurant that offered Turkish light food as well as African specialties," he said.

His original restaurant in a lane near Kızılay exclusively served Somalian cuisine. It became a hit with the students, thanks to its budget-friendly dishes. But others wrote off the restaurant as cheap and busy, always full of African students.

Just a few months ago, Issa and his friends Mohamed, Nasser and Adam opened a second restaurant at a different location, this time creating a lavish and luxurious atmosphere to attract non-African guests to taste a variety of cuisines from Ethiopia, Yemen and Somalia under one roof.

"It is very common to see our waiters serving Somali, Yemeni and Ethiopian food and attending to clients of different nationalities," Issa told Anadolu Agency.

"We also have Turkish patrons here. A lot of Turks want to know about African culture and taste its food. They mainly try our Sambusa, filled with beef or mutton. In terms of popularity, Yemeni cuisine is a favorite among non-African clientele," he said.

Sharing secrets of his kitchen, Issa said preparing Ethiopian dishes was the most challenging. Somali and Yemeni cuisine is somewhat similar, but Ethiopian is entirely different, generally consisting of vegetables and often very spicy meat dishes.

The restaurants serve bananas with every order as they are an important part of Somali meals, whether at breakfast, lunch or dinner.

A Turkish customer named Erdoğan, sitting in a cozy chair and trying Somali rice and mutton, said it was a unique experience. Offering a diversity of food under one roof was a good idea, he said.

Commenting on the differences between three cuisines, an Ethiopian customer named Razene explained that traditional Ethiopian food tastes quite different from Somali and Yemeni dishes. Rice and meat are the common ingredients in all three cuisines.

Rasene used his spoon and fork to devour rice and injera, the national dish of Ethiopia and Eritrea. The sourdough flatbread is made from tiny, iron-rich teff seeds, which are ground into flour. The flour is mixed with water and fermented for a short period of time. It is then baked by pouring the mixture onto a giant circular griddle, known as a mitad.

Turkey hosts 10,480 African students at universities across the country. The country has recently emerged as a top destination for Somalis, not only for education but also for tourism and health treatments.