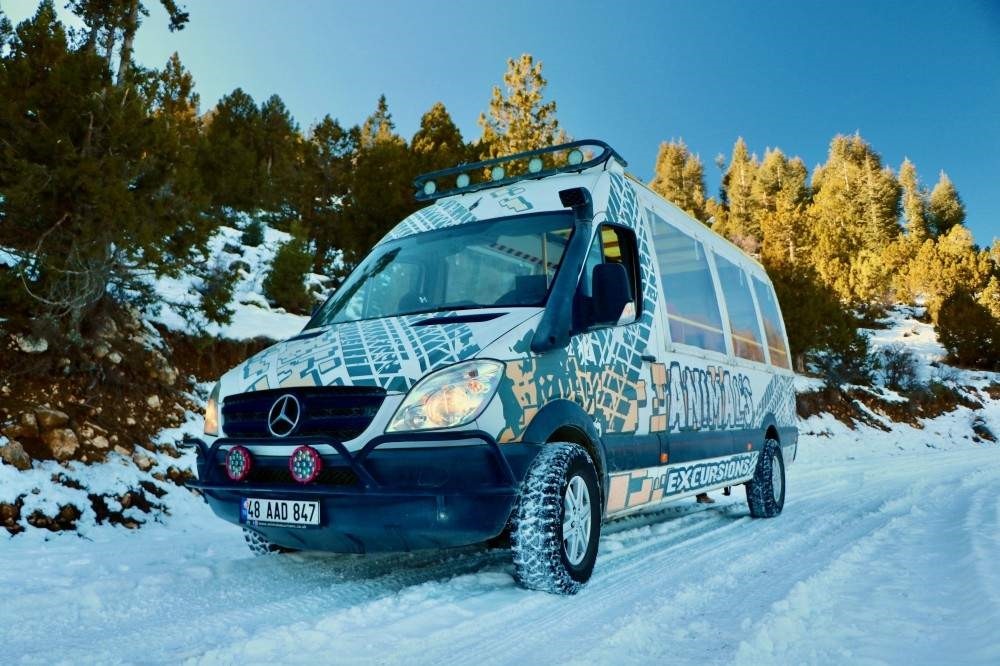 Istanbul's English-language comedy scene continues to thrive with the addition of a new comedy club, while in the south, expats are discovering a "cooler" side of ever-sunny Fethiye

With the start of the new year comes two brand-new innovative endeavors by members of Turkey’s lively expat community in Istanbul and beyond. This weekend will see the opening of a new comedy club in Istanbul and the start of a new guided tour to enjoy the snow in the mountains of Fethiye.

NOT JUST FOR LAUGHS: ISTANBUL COMEDY CLUB OPENS ITS DOORS TO ALL

This Friday, Jan. 17, an all-new comedy, theatrical and performing arts venue will open its doors to serve as a creative venue and outlet for anyone interested in putting on a show or holding workshops, or for any other events that involve a stage. The brainchild of three steadfast members of Istanbul’s standup, improv and theater arts community, the Istanbul Comedy Club, which is located on the terrace of Rasputin in Beyoğlu, will be holding a “soft” opening this Friday at 8:30 p.m. with a performance by The Clap, Istanbul’s resident English-language improvisational comedy group composed of expats that have been performing all over town for the past seven years.

The three expats behind the opening of this innovative new club that is a welcome entry for Istanbul’s active performance arts’ scene is none other than Kenny Laurie, a British national comedian, actor, director and playwright, Jerrod Weston, a Seattle native who is also a member of The Clap improv troupe and Aslı Akbay, a British-Turk comedian from London, a member of the well-known comedy troupe Çok da Fifi, a 5-woman Turkish stand-up troupe who perform all over Turkey and Europe, and is also the founder of ‘Bosphorus Comedy Nights’ previously named ‘Take Me Up the Bosphorus’, the city's first regular English language standup comedy series which she started in 2015.

Laurie – who leads The Clap, has directed and starred in productions by Speech Bubbles and whose recent play "The Exhibition" also took part in this very same location before it was transformed into a full-fledged performing arts club – explained their generous intentions behind this not-so-ordinary comedy club. While the crew has embarked on renovations such as putting up a stage and heating and cooling systems, the whole point, Kenny told me, is to provide a venue that people will be able to use to put on any sort of performing arts-related event, whether it be a comedy show, theatrical play, magic show, performative dance, workshop or quiz night. “This means that people who have wanted to get involved in a creative endeavor but are worried about finding an appropriate stage will no longer have to carry such concerns. The ultimate goal is for the space to be a hive of activity and is not limited to English language events so we really want to encourage people to try new stuff,” Laurie said.

With this new venue, not only will those harboring creative visions be able to bring them to fruition in a relaxed and central location, but also those already involved in the performing arts, such as The Clap and other sketch and standup outfits, will now be able to have a set venue and not be as nomadic as before, Kenny said. All someone has to do is ask if the date is available and set up their own program, he explained. Entrance fees will be determined by those putting on the shows, and on nights the Istanbul Comedy Club has a booking, there will be an operating bar and a capacity for 40 to 50 people to watch the show. On Saturday, Feb. 15, the venue will hold an official opening with a variety show showcasing all of the different types of acts the stage can handle.

FROLIC IN THE SNOW IN THE HILLS OF FETHIYE

Winter Turkeyland is a brand-new, specially curated day time snow trip that will take place on Erendağ, a peak in the Taurus Mountains surrounding Fethiye. A series of these unique day trips spent frolicking in the snow among spectacular scenery will be led by British expat Lyn Ward, who is also the author of the entertaining and informative Fethiye Times website, and Semih Özgüder, whose Animal's Excursions tours are popular pastimes among visitors and the expat crowd during the summer. Known for his fun and wild adventures, Semih, aka “Animal,” guides people through adventures such as paragliding, ziplining, rib riding and much more in Fethiye during the summer months. Animal's Excursions has its own set of vans, one of which is decked out to provide a nearly fully-equipped kitchen and even restroom facilities.

These brand-new snowtrip day tours, which kick off this Sunday, Jan. 19 and will also be offered on Jan. 22 and Feb. 15, will involve a variety of snow-related activities such as sledding, snowball dodgeball, snow tug-of-war, snow tag and even a snow-sculpting competition. Set to accommodate up to 40 participants, three passenger vans and Animal's Excursions’ catering van will depart by 9:30 a.m. from Fethiye, driving for approximately an hour and a half to reach Erendağ. Upon arrival, two hours will be spent on frolicking and fun for all ages and fitness levels, after which guests will enjoy a cookout prepared by the Animal Excursions team, which will include soup, mezes, pasta, and an outdoor barbecue serving up chicken, köfte and sucuk, a type of Turkish sausage. Libations, including hot drinks from a machine in the Animal Excursions van, will be made available. After lunch, there will be a snow sculpture competition in which teams will build creative snow unicorns for a prize. Departure is planned for around 4 p.m. and the vans should be back in Fethiye and at your door between 5:30 and 6 p.m.

All in all, this is about a four-hour day spent enjoying the elusive snow in the hills of Fethiye. So many visitors to Turkey and admittedly expats tend to spend their time in the holiday destination hubs by the sea or in the big cities, and for this reason alone, the team of Fethiye Times and Animal's Excursions have envisioned offering the experience of a day in the snow and in the outdoors. However, due to the unpredictability of nature, the dates have been scheduled according to expected snowfall and may change depending on the forthcoming weather conditions.

Young children are welcome to join the snowy adventure, and car seats will be made available upon request. Picks-ups and drop-offs will be in Fethiye, Çalış, Hisarönü and Ovacık and are included in the price as are lunch and the games. Participants are advised to dress warmly, wear comfortable shoes and to bring along a hat, scarf and two pairs of gloves, as a spare pair could come in handy if the first gets wet. Guests can also bring along a sled if they like. Bookings can be made directly with Ward for this weekend’s trip and with Animal's Excursions for the following dates.