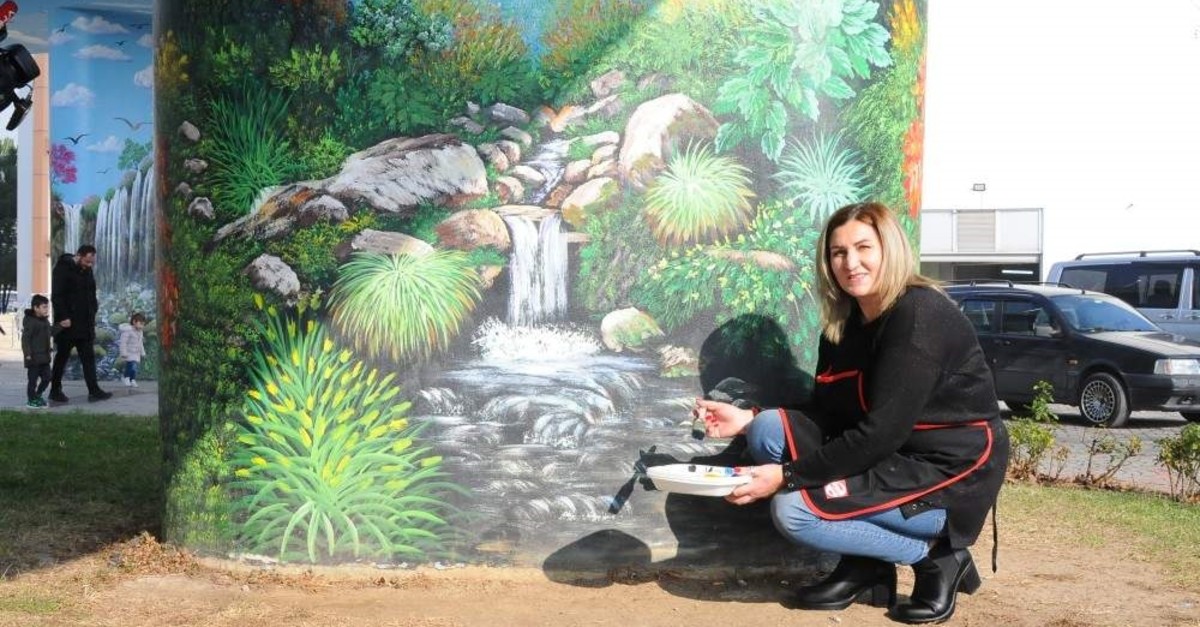 Nikolau, 44, says she wants to continue painting the town. (DHA Photo)
by Daily Sabah with DHA Jan 16, 2020 11:56 am
Moldovan artist Ecaterine Nikolau has been breathing new life and color into Kocaeli's dull walls, transformers and viaducts for over 12 years.

After initially coming to Turkey in 1999 as a tourist and falling in love with it, she decided to move to northwestern Kocaeli province's Izmit district. After working in various jobs for many years, she then decided to return to painting – her true passion and profession.

She rented a small place, turned it into a painting studio and started creating beautiful works of art.

A few years later in 2008, Kocaeli Municipality came to her with an offer that would change her life. Impressed by her artwork on a transformer, the municipality asked Nikolau to use the city's walls as her canvas to create more masterpieces.

From the districts of Karamürsel and Değirmendere to Gölcük and Dilovası, hundreds of her colorful paintings now grace walls across the city.

"I came to Turkey 20 years ago just as a tourist. I wanted to see a Muslim country and came here. After loving Izmit, I wanted to stay here. I have been painting since I was very young, I also have some awards in this field. Later on, I tried to continue my paintings here. I bettered my skills by receiving training on painting (techniques, styles etc.) and became internationally certified. I started creating murals and street art after seeing another artist's works on the walls. What initially started as one or two small paintings turned into something much bigger with the help of the municipality," she said.

Describing the opportunity to paint the city's walls as a "wonderful feeling and her "childhood dream", Nikolau says this has enabled her to execute her art as well as de-stress.

Expressing that she felt very happy when she sees her work on the streets, Nikolau said: "It's great to leave something behind. It's great that my works are in places where everyone can see in the city. It's like an open-air gallery, outdoor exhibition."

"A lot of people come by when I'm painting and congratulate me, which boosts my morale," she said.

Nikolau said getting positive reactions and feedback has been one of her driving forces to continue painting, and added: "The people I meet (who see my signature on the paintings) ask me: 'Are you (that) Ecatarine?' We see your name on the walls. They are surprised when they find out it is me who is painting the walls. I will continue painting murals across the city."
RELATED TOPICS