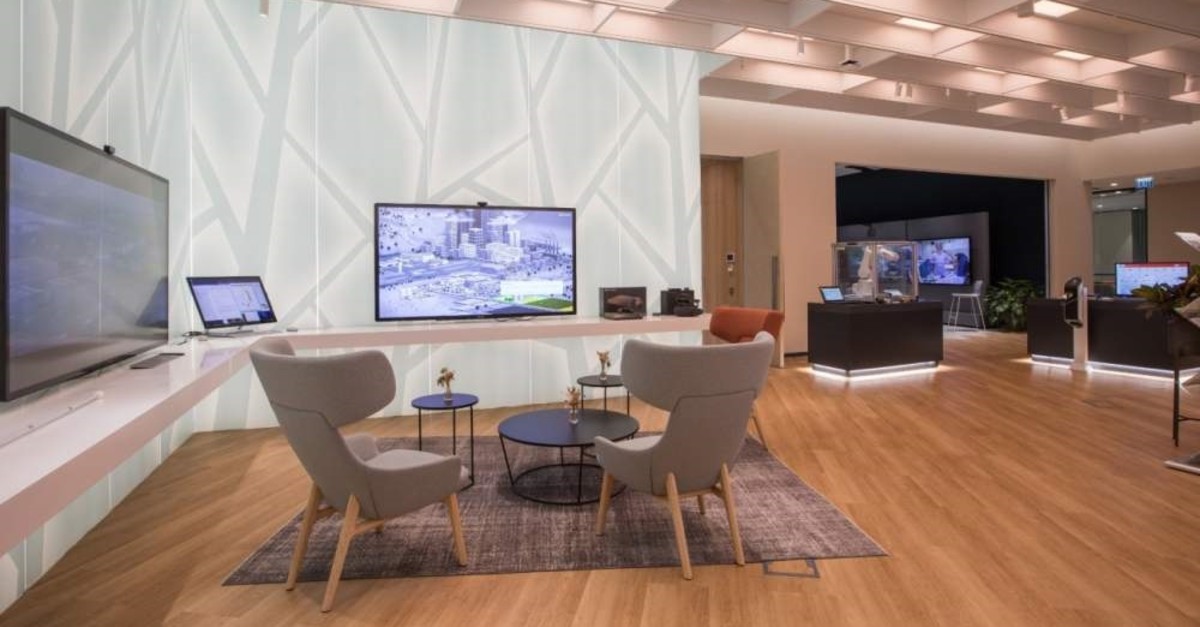 Microsoft's first new-generation technology center for the Middle East and Africa region is in Istanbul.
by Şule Güner
Feb 11, 2020 11:48 am

The domestic drive in the Turkish technology market is still seeing an upward trend, and this momentum should be maintained to create more added value for homegrown products, Microsoft Turkey says

When it comes to technology, many products used in Turkey are of foreign origin. For this reason, many startups in both the public and private sectors are trying to increase domestic production, including international brands such as Microsoft. While Turkey's location, which connects the East to the West, increases its importance and export potential of domestic production, international brands are also attempting to uncover this potential.

Onur Koç, the chief technology officer (CTO) of Microsoft, which opened a technology center in Istanbul last year, has worked for 14 years in the brand's headquarters in Seattle and aims to attract investment to Turkey within the next four years as well as discover new homegrown technical talent and develop it.

Koç explained Turkey's value in software and how much the production in this field would have development leverage. "When I give examples in my speeches in Turkey, I see that more than half of the samples are foreign. I keep wondering if we can do anything in Turkey, which is a little bit of a motivation-breaker. So, I will tell you examples mostly from Turkey," he said. "Yes, aren't there a lot of good projects carried out at John Hopkins University? Yes, of course, there are. Microsoft is doing a lot of projects to protect lions or endangered animals in Africa. These are also very nice projects. However, as a Turkish Microsoft employee and a Turk above everything else, our biggest goal is to develop Turkey and to exert those same efforts here. After we get producing, we will have already inspired people (to follow suit)."

Koç stated that Microsoft had made an investment of between $7 million and $8 million for its technology center in Istanbul, and they expect this to contribute TL 4 billion to the software ecosystem in Turkey. "Ninety percent of the solutions you will see here are technological solutions created by Turkish customers and Turkish software companies," he further stressed. "A few months ago, we hosted the Ministry of Transport of Qatar and a team of experts from Nigeria. We have customers not only from Turkey but also from the Middle East and Africa regions. We focus on artificial intelligence and data-based solutions. This also includes analytical technologies. From smart trucks to smart wind roses, from smart charging units to kiosk machines in smart banks and smart canes used by the visually impaired, all of these solutions have been developed by Turkish software companies and all the processes are managed in Turkey."

Koç stated that Turkey has great potential in software and that they aim to develop this potential with the open-source ecosystem. "In terms of global software companies and start-ups, Israel is ahead of us, but when we look only at the number of software developers, there are almost as many Turkish software developers as the Israeli population," Koç noted. "Our universities are training good software developers. It is very important for us that the projects created by these friends are on par with world standards. One of Microsoft's most important solutions is the Azure cloud platform. Startups and software companies build projects and solutions on Azure. They can sell them abroad or to other countries. When we look at open source today, these software and cloud platforms can now be developed in Turkey. One of our goals is to expand our open source ecosystem."

"We have a startup called AI academy. We work very closely with technology companies that invest in this field and data science groups," Koç said. "There are companies with a team of 20 data scientists, while some have 50. Among them, the financial sector takes the lead. It has gradually started to form in the public sector as well. We work closely with them and think 'How can we train data scientists?' 'How do we give them the chance to do better projects?' We offer not only education but also applications to our academy. Within six months, we ensure that the projects we choose can be brought to the level of being turned into real-life applications."

Food for thought from Microsoft CTO

As a company that provides cloud-based services in the new world, our greatest goal is to undertake innovative projects in Turkey and to ensure the project development of innovative startups. Therefore, the number of technically educated people has to increase. Maybe two years from now, 10% of the Microsoft office will be in sales and 90% will be our technical-based teams.

Our country has established sectors that have developed well over time, such as banking. That was in line with the necessities of the past. Now we have to ask ourselves this: it is nice to produce and send vehicles all over the world, and it is nice to produce and send white goods, but how can we make them smart? How can we give them more added value? How can we create the software behind them? When it comes to vehicles, everyone can think of cars that go by themselves, which is not enough. We are actually talking about such a big ecosystem that even the software around an electric charging unit really requires serious innovation. As a country, we have to create them. Turkey has been a very important textile center for years. When we were shopping abroad, we saw the infamous "Made in Turkey" text imprinted on the labels of clothes. It is very nice to produce T-shirts and bathrobes, but what about wearable technologies? We have well-trained, quality doctors and medical services in Turkey. But how can we improve this capacity to go parallel with technology? We must find answers to these questions.

WeWALK, the world's smartest cane, developed by the Young Guru Academy (YGA) and Vestel engineers using Microsoft's AI solutions, was chosen as one of the 11 projects that Microsoft will support globally. The smart cane, which can be integrated with mobile applications, was the first product to bring Turkey the "Golden Prize" at the Edison Awards, held in honor of one of the greatest inventors of the 20th century, Thomas Edison.