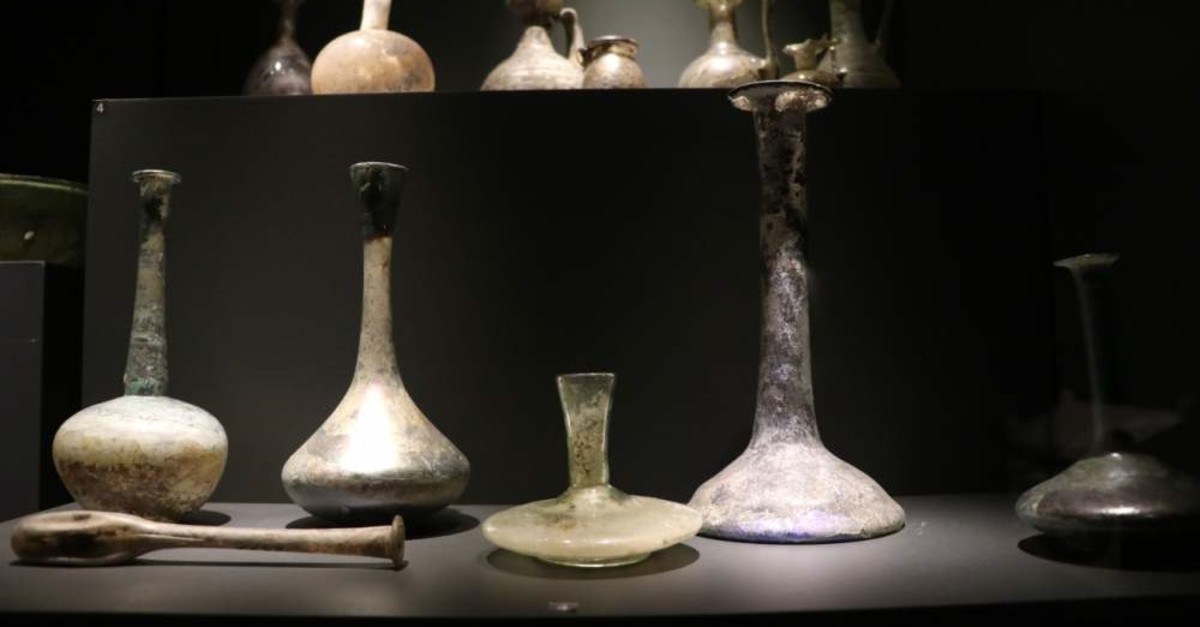 The tear catchers in different shapes such as candelabras, pots and tubes are on display at the museum. (AA Photo)
by Anadolu Agency Feb 14, 2020 1:03 pm

Tear catchers, or lachrymatory bottles, have a history that dates back to 400 B.C., when women kept the tears they shed for their husbands who joined the army or lost their lives, revealing both history and love's past. These bottles, kept in the Kayseri Archaeological Museum in central Kayseri province, are of particular interest on Valentine's Day.

The tears poured into these bottles used by women in different periods to depict their love give clues as to how love was experienced in the past.

Nilay Çorağan, a professor at the Department of Art History, Faculty of Letters at Erciyes University, told Anadolu Agency (AA) that the story of lachrymatory bottles dates back to ancient times.

According to Çorağan, lachrymatory bottles and objects called unguentaria are identified due to their distinct vessel forms. She said that unguentaria had an important place in the life of human beings until the end of the Roman period and the Byzantine period. Pointing out that unguentaria are made of glass and ceramics, Çorağan noted that oil, perfume, cream and other liquids were kept in these bottles.

Indicating that lachrymatory bottles, however, come in a variety of forms such as a pots, tubes, candelabra and reels, Çorağan continued: "When it comes to its relation with the beloved ones, it is known that in ancient times, people saved their tears in these bottles to express their respect and sorrow for the dead, and then put them in graves ... In Iran, it is said that women saved their tears in these bottles when their sons or husbands went to war. It is also known that corked lachrymatory bottles were developed in Europe. We know that women saved the tears they shed for their husbands and those who died and then corked them in these bottles. This cork actually prevents the tears from evaporating and disappearing. The moment it evaporates and disappears, the mourning ends. In a sense, keeping mourning in oneself also means hiding grief and sadness."

According to Çorağan, during the Civil War in the U.S. in the 1860s, women are said to have saved tears in these bottles after their husbands went to war. "The more tears they saved, the more they proved the enormity of their love," she said, adding that the tears contained in the bottles were evidence of loyalty.

Merve Naz Akan, a visitor of the museum from western İzmir province, said that the definition of love has changed over time and that the tears poured into the bottles at that time indicated deeply emotional behavior.