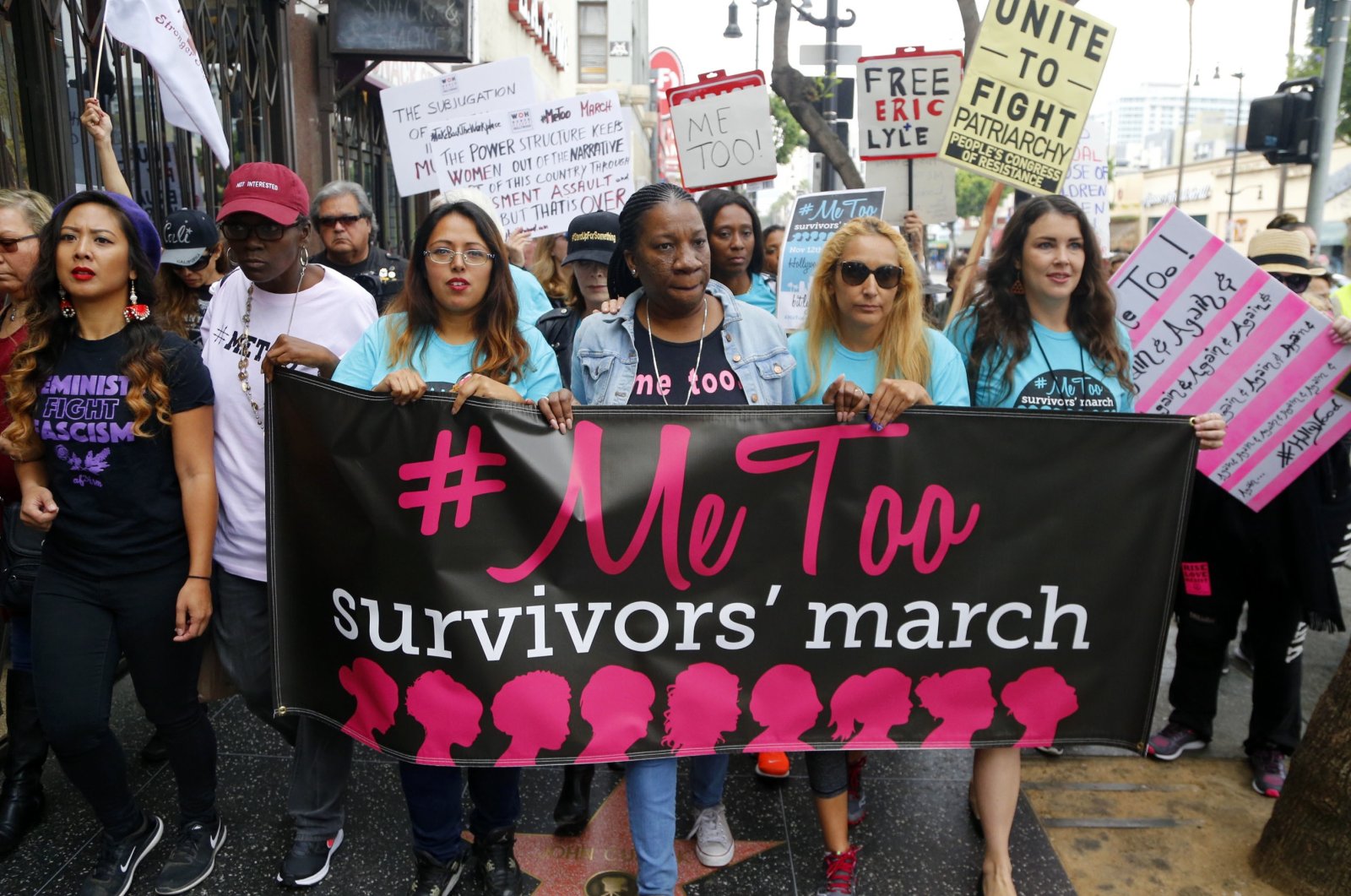 Tarana Burke (C), founder and leader of the #MeToo movement, marches with others at the #MeToo March in the Hollywood section of Los Angeles, California, U.S. Nov. 1, 2017. (AP Photo)
by ASSOCIATED PRESS Oct 16, 2020 6:13 pm
RECOMMENDED

When #MeToo movement founder Tarana Burke thinks about the group's future as the world celebrates its anniversary, her vision is clear.

It predates the moment that most people know – when the #MeToo hashtag went viral three years ago on Oct. 15, 2017, sparking a global conversation about sexual harassment and assault.

For her, that mission emerged years earlier – in 2006, when Burke, after a career of community service, began working directly with survivors, many of whom were young black girls and children of color.

“It sort of triggered something in me because I had experienced sexual violence myself as a child,” Burke said. “What would my life have been like if somebody had intervened at 12, 14 or 16, even just to say that I deserve healing, and that I deserve wellness and wholeness and joy?"

“And so it started off trying to bring those messages, that idea of healing into these young women’s lives and using the power of empathy,” she said.

As the #MeToo movement marks the third year since it received global recognition, Burke is working to make sure it remains inclusive and reclaims its original intent: a focus on marginalized voices and experiences.

She sees that path forward through Dani Ayers, a 39-year-old black woman who quietly, yet with a bold vision, transitioned into becoming the movement’s CEO in July after joining the organization in 2018.

In a year marked by a nationwide reckoning over systemic racism and inequities that have disproportionately impacted black Americans, the #MeToo movement is now jointly led by two black women keenly aware of the inequality that has long existed in America – something they find both empowering and challenging.

“It’s an opportunity to shine a light. We are absolutely centering black women and girls, people of color, queer, trans, disabled folks in our work because we know that solving and interrupting the issue of sexual violence in those communities means ending sexual violence everywhere," she said.

Several events are planned to mark the third anniversary, including the announcement of the new leadership structure and a survey of survivors that Burke and Ayers expect will reignite momentum behind the movement. Their goal is to create a global network of organizations united behind the movement to end sexual violence.

But after a groundswell of support from celebrities, politicians, marches and more, they said it’s been challenging to keep the spotlight on the need for funding to continue the fight against sexual violence.

As black women, they said it’s frustrating that many don’t see the intersection of race and the sexual violence women of color endure.

“We’ve got to make that connection clear for folks,” Ayers said. “We’ve seen money start to be pushed to black-led organizations and it needs to happen, but sexual violence has not seen that same funding support. And I think it’s because folks don’t automatically understand the intersection of sexual violence and structural racism. And so we really have a lot of work to do.”

They also noted the Breonna Taylor case and the #SayHerName campaign, which brings attention to black women like Taylor whose cases go unheard or are silenced.

Burke said she herself has dealt firsthand with the erasure that black women often endure when people failed to acknowledge the #MeToo movement was started and led by black women and people of color.

“I’ve heard people ... not acknowledge that there is a black woman right now trying to hold this narrative, hold this work and push a narrative forward that is opposite of what we’ve heard in the news, about it being about Hollywood and white women, powerful white men, or powerful men, period,” Burke said.

“So as a black woman, I feel both the pride and the burden of carrying this kind of work forward," she said.

The coronavirus pandemic has also presented unique challenges for the movement.

During the pandemic, the group has seen a 20% rise in intimate partner violence and increased concerns about child sexual assaults, Ayers said, so they've shifted toward offering virtual resources and programming, including a survey that revealed stark disparities.

“We're hearing black survivors say, ‘I don’t have money to eat,'” Ayers said. “The disparity is just growing as a result of the pandemic and we need to be able to talk about that, not only in a qualitative way but we need the data to be able to help those who have money understand where we need to be pushing resources and why.”

Ayers and Burke also recognize the power that survivors hold – especially at this moment as the U.S. is just weeks away from selecting its next president after a campaign fraught with divisiveness.

Burke late last year launched #MeTooVoter as a way to galvanize the millions who have supported the movement. Both Burke and Ayers view survivors as a significant voting bloc whose voices deserve to be heard.

While the group has not officially endorsed either candidate, the women said they have serious concerns about what another four years of U.S. President Donald Trump would mean for survivors of sexual violence.

“I think we are in a critical moment and survivors’ voices in this moment should be the loudest,” Burke said.

"If we look at the two candidates, for a lot of people, neither of them are their top choice," she said. Trump has faced multiple accusations of assault and harassment, all of which he denies. Earlier this year, a former Senate staffer accused Democrat Joe Biden of sexually assaulting her in 1993, which Biden has denied.

But beyond the election, Ayers is hopeful about the work that remains.

“The survivors, they inspire me every day,” she said. “We’re creating a culture inside this organization that gives people the space to be who they are and to show up as their full selves. There are so many people working to end sexual violence and watching their work inspires me. So there is hope.”