Bookish in Beşiktaş: A bibliophile on the Bosporus 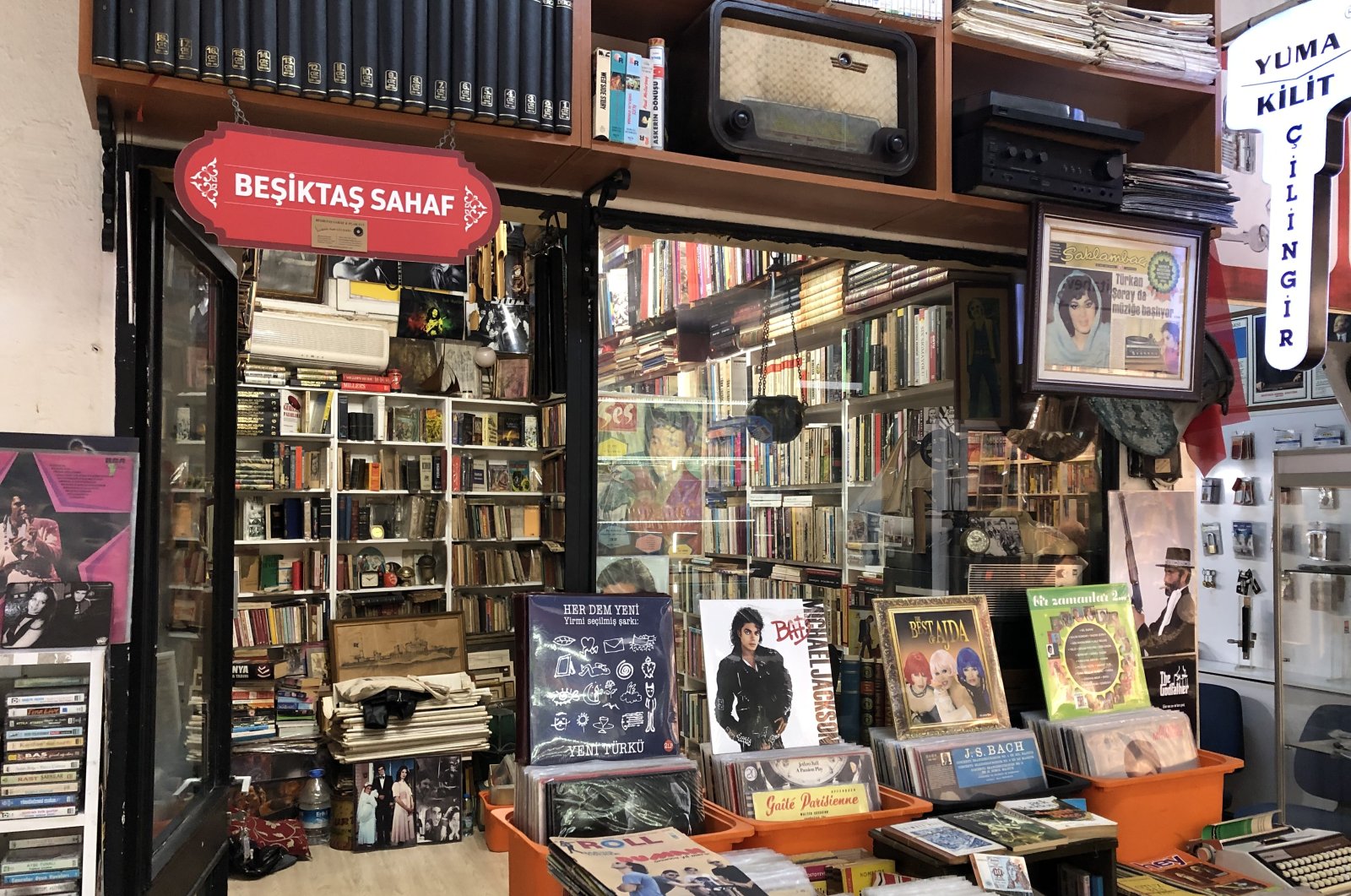 Beşiktaş Sahaf and Vinyl House is the likeliest option to visit if you are looking for a secondhand book store in the Beşiktaş district. (Photo by Matt Hanson)
by Matt Hanson Dec 29, 2020 12:20 pm

The shorefront district of Beşiktaş is rife with secondhand bookshops, known as sahafs in Turkish, a staple of urban cultural memory. Yet, amid curfews and lockdowns, many bookshops have closed down.

On a cold, midweek morning in an inner-city neighborhood, the presence of culture is largely invisible. All the more so, the remnants of printed material born of foreign continents and distant hemispheres make a rather faded impression. It is the dead of winter, and as the Western world comes to grips with a forcibly untraditional holiday season, Istanbul is waking to the alarm of a singular portent, that the future which awaits the global village is nothing short of an absolute mystery. As the abnormal ensues, one of the only creature comforts left is the past, or more elaborately, nostalgia.

Within the core of Beşiktaş, a quarter famous for its football club and an otherwise confrontational stripe of local pride, especially on game nights, there are numerous havens for literati young and old. They emerge in the form of shops, cafes and mixes of the two, otherworldly portals through which to peer into the stories, thoughts and records that span the adventure of printing the written word. Each volume and tome, whether a pocket paperback or thick hardcover, cast long shadows that tell time, like sundials of leaves and spines. By its socioeconomic mix, Beşiktaş preserves a unique slice of Turkey’s modern cultural heritage.

Retaining more character than a store of new books, a sahaf, or secondhand bookshop, speaks to the retro nature of books themselves. In his study on aging, “The Force of Character: And the Lasting Life," American psychologist James Hillman wrote with inventive insight on the effect of time’s passing. His observations, beyond that of a clinician, mine the depths of subjective psychological conditioning with a practitioner's clarity. Like that of an aging person, books transform with the seasons, and the fact that they persevere despite the overwhelming influx of digitization is indicative of the strength of their character.

Hillman drew direct inspiration from literature to form his theory of aging as a psychological phenomenon. It was specifically the “Four Quartets” by Thomas Stearns Eliot, published in the midst of another worldwide paradigm shift, in 1941. Eliot poeticized with critical scrutiny on the distinction between experience and meaning. To age is to reconcile the two, Eliot wrote, with the later crystallizing in reflection. And Hillman echoed the process, noting that it is not defined by a sense of loss, as in the Proustian imagination. Curiously, it is books, and perhaps more exactly, aged or secondhand books, that contextualize experience as meaning.

To paraphrase another wise saying on the idea of books in relation to age, it was the American poet and translator Gary Snyder who said that in Western culture, books are elders. An oft-quoted African proverb reaffirms the statement, telling of how the death of an old person was mourned as if a library had burned to the ground. But when the present moment demands the full attention of a society bent on returning to an earlier state of balance, the previous past is sidelined, and history’s pivots switch. It is potentially the case that life before COVID-19 may take on a bygone appeal in the same way that film posters from the 1970s are dustily alluring.

In an instant, the results of searching online maps garner at least six sahaf shops in Beşiktaş, though, in reality, circumstances are apt to be more fickle and subject to changes unforeseen by even the most advanced algorithmic intelligence. In a human landscape, especially one in the midst of a universal health care crisis, the opening and closing of nonessential marketplaces, like that selling rarefied cultural products such as vintage books, is a world of extraordinary caprice. But, however abstract from mainstream economic activity, I was confident that Beşiktaş would still be selling its old, used books.

What would have been the likeliest option for a seeker on the path of appreciating secondhand books on a casual workday outing, Beşiktaş Sahaf and Vinyl House, was covered in curtains, chairs and boxes. Although unlit and locked, I was not deterred and simply asked the next door shopkeeper when it might open. He said in a couple of hours, so I sauntered off and headed to the next sahaf on the list, through the winding, steep alleys in the cobblestoned bowels of Beşiktaş. Nestled into a storefront along a sloping street, Aksoy Sahaf was closed without a book in sight.

Next, within a multistory mall, where there were at least two new bookshops in its immediate environs, any semblance that a sahaf may have existed had been completely struck from the physical plane, although one of their names, “Afili Sahaf” was still displayed on the floor plan guide. Up to a broad avenue, the formidable acquisitions of “Djoyen Sahaf," which normally exhibits exceptional, large-format titles on history and geography along its glass wall for sidewalk-strolling passersby were shuttered. Its treasury of collectible books inside was reduced to a modest sampling of studies on art, archaeology, fashion and botany.

Inside another mall, called Sinanpaşa and modeled like a modernist caravanserai, cheap Christmas lights dangled over a staircase that led from tacky clothiers, phone repairmen and outmoded tailors to carts of books, many of which seemed to be defunct textbooks. And the empty square in which the books were stored were organized for customers in an utterly counterintuitive manner. It was a pure enigma of salesmanship. The corridors between shelves were so narrow that a fit person could barely fit, never mind take out a book. And barely a title was perceivable in masses stacked sidelong so that only the white of the pages were visible.

After that conundrum, reminiscent of a Borgesian literary puzzle, I returned to the namesake of the neighborhood’s bookish history, Beşiktaş Sahaf and Vinyl House. I arrived just before noon, and a young man with a yellow winter coat was opening shop, focused with earbuds firmly inset as he listened to music to start a new workday. His youth and the cultural artifacts surrounding him were at odds. A Turkish poster from the original Star Wars Trilogy gleamed in the overcast light, gray and gold. I found Greek and French vinyl beside Turkish classics. Finally, I saw books, literature. It was a promised land of time suspended in ageless thought.