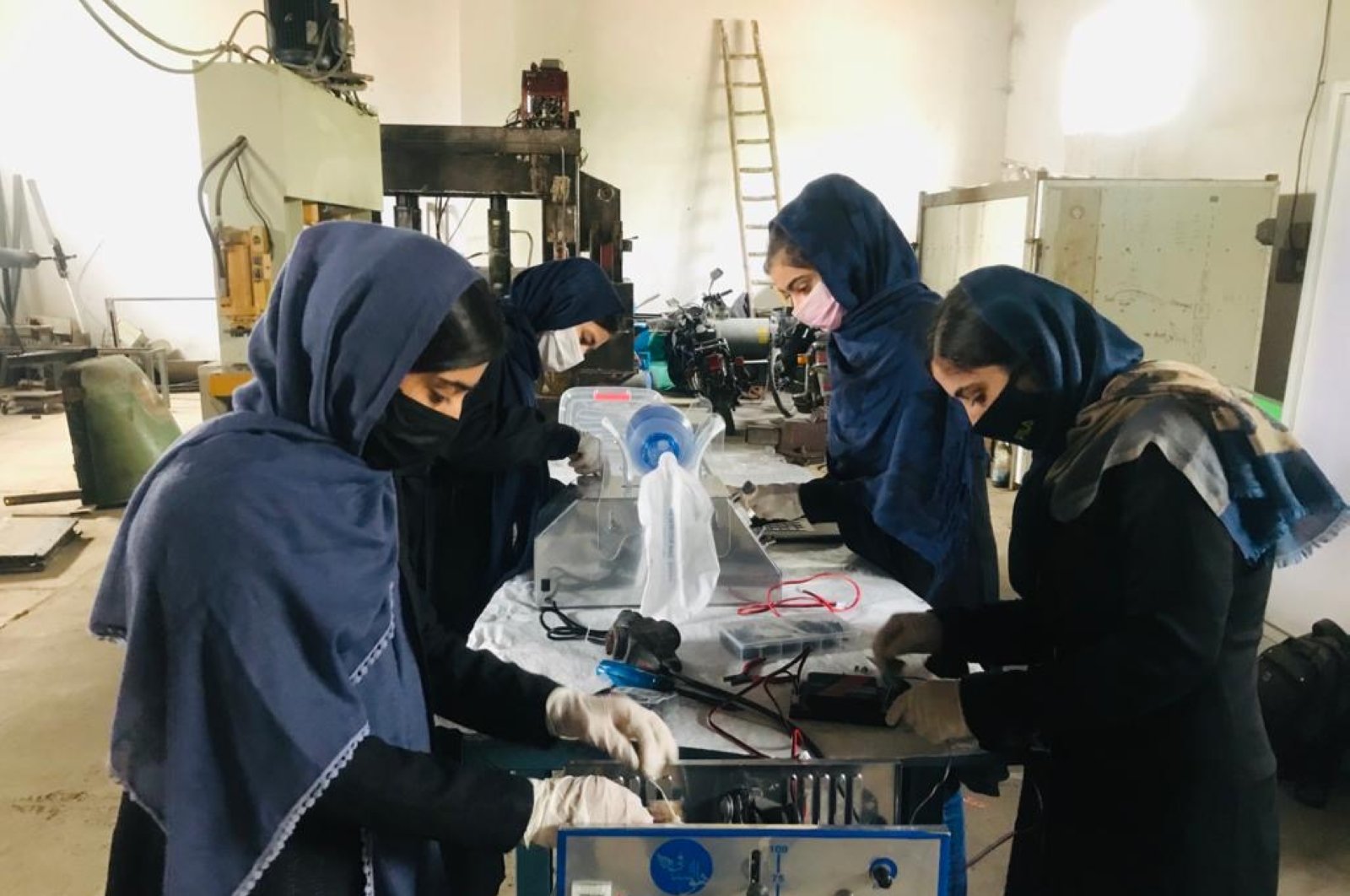 With pliers in hand, a group of Afghan girls fashion makeshift ventilators from car parts, bike chains and machine sensors, an imperfect solution to the country's looming coronavirus crisis.

The five teens, who live in Herat near the border with Iran, are part of the Afghan Girls Robotics Team: an initiative that teaches schoolgirls programming and computer science.

"We had to be creative when it came to sourcing material," said Somaya Faruqi, the team's 17-year-old captain.

"Our machines are built out of a combination of a Toyota Corolla motor, chains from motorcycles as well as separate pressure, heat and humidity sensors," she told the Thomson Reuters Foundation via WhatsApp.

While the devices cannot replace medical ventilators, they should bring temporary relief to coronavirus patients.

"It's not a perfect device, but it can do two things: control the volume of oxygen entering the body, and count and control the number of breaths per minute," said Faruqi.

Infections are rising in a country of 35 million, with more than 16,500 infections, according to Johns Hopkins University.

Experts say the real figure is likely to be far higher.

Similar estimates hold for Herat, home to about a million.

"Every day, the number of sick people is increasing and in the near future, we will have neither enough ventilators nor hospital equipment," said Faruqi.

For two months, her team – wearing masks and gloves – has worked five long days a week to complete their prototype.

"We were quite scared by the prospects of the pandemic, so we decided to try to do our part," said Faruqi.

Before the coronavirus outbreak, the girls built robots, studied programming and prepared for their final year of school under an initiative set up in 2015 to teach girls tech skills and instill confidence through science.

Computer scientist Roya Mahboob – founder of the Digital Citizen Fund – says she wanted to "give them a digital voice" in what is a conservative country, where many girls stay home.

The team – who wear long black dresses and headscarves along with their anti-virus masks and gloves – has been celebrated across Afghanistan and won prizes in the West.

More than 3,000 girls in Herat have studied at the Digital Citizen Fund, and the city's university now has its largest body of women pursuing computer science, topping 500.

Afghanistan's literacy rate for women remains low at about 30%, according to the United Nations, with many girls in rural, conservative communities unable to attend school.

"It's slowly changing," said Faruqi, but only for some.

Families like hers are more liberal, she said, otherwise it would have been impossible to leave the house and work on the breathing machines.

The girls hope to finish their device by mid-month and sell them for about $600 – 50 times cheaper than medical ventilators – as a stopgap for Herat's main COVID-19 hospital, a government facility.

"In a country where medical supply is largely lacking, we are prepared to look into such alternative options," Qadir Qadir, general director of the Ministry of Public Health, told the Thomson Reuters Foundation.

He said Afghanistan had about 480 ventilators available, but about 40 belonged to the military and dozens to non-profits.

"Whether the girls' product can be used is yet to be determined. It would need to be tested and can't immediately be used in patient care," said Qadir.

Faruqi is undaunted, her team working all-out to finish their low-cost, low-tech prototype.

"We've seen a lot of encouragement from people, but our biggest drive is the current situation: Afghanistan is in crisis and we want to do what we can to help," she said.