Almost all Madagascar's lemur species 'face extinction' according to experts 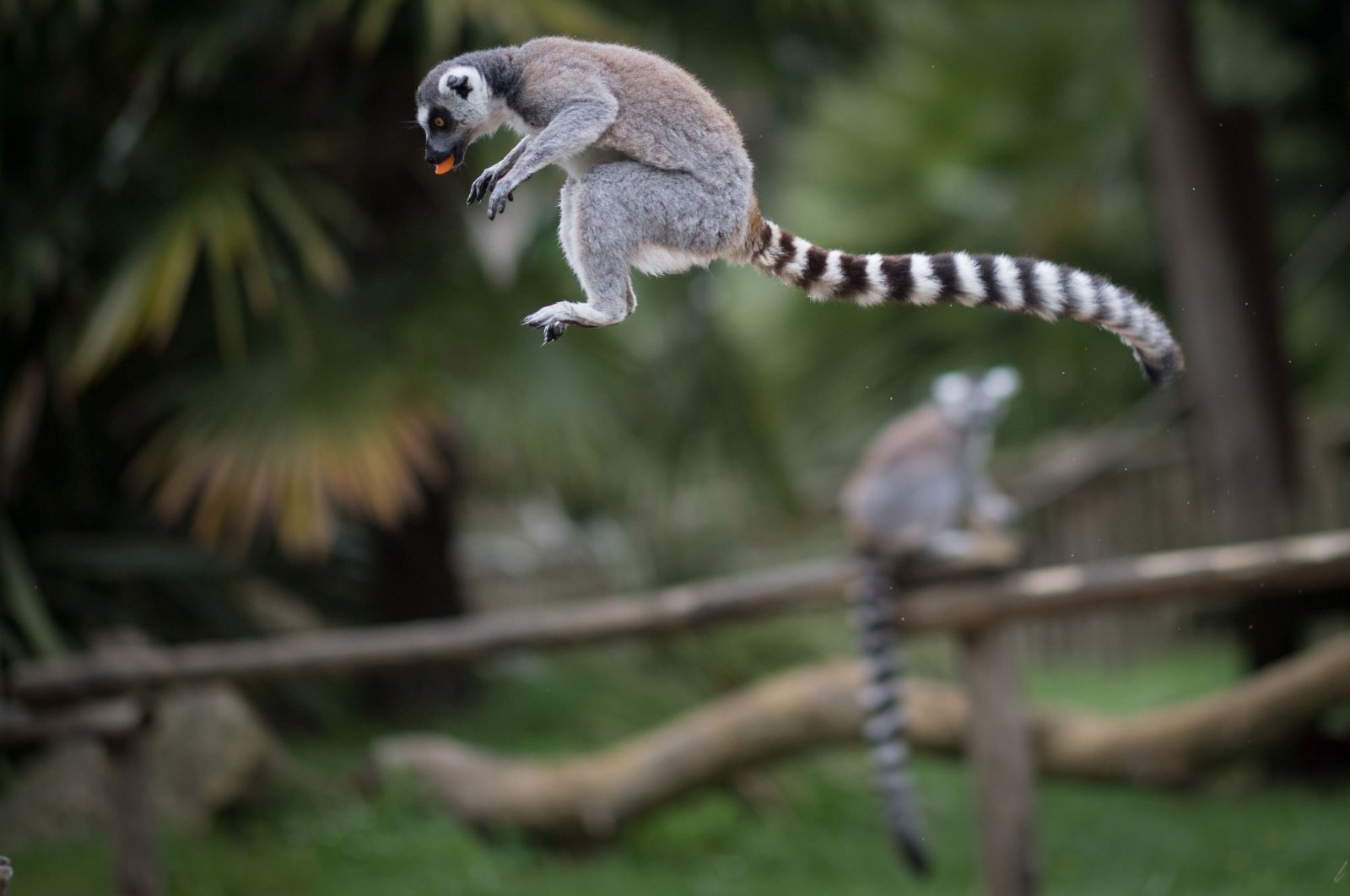 In this file photograph taken on May 6, 2020, a lemur jumps with a piece of carrot in his mouth at the zoological park "Planete Sauvage" at Saint-Pere-en-Retz, on the outskirts of Nantes. (AFP Photo)
by French Press Agency - AFP Jul 09, 2020 7:56 pm
RECOMMENDED

Almost all species of lemur, the small saucer-eyed primates native to Madagascar, face extinction, an international conservation body warned Thursday, adding to the growing list of animals and plants under threat.

Of the 107 surviving lemur species on the island, some 103 are threatened, including 33 that are critically endangered – the last stop before "extinct in the wild", the International Union for the Conservation of Nature said.

The organization called for a fundamental reimagining of the way humanity interacts with the natural world, in an update to its "Red List of Threatened Species".

The list assesses 120,372 species and classifies more than 30,000 species as at risk of disappearing.

The report comes amid growing alarm that the planet may have already entered a period of so-called mass extinction, only the sixth in 500 million years.

The United Nations' biodiversity panel IPBES last year warned that up to one million species faced the risk of extinction as a result of humanity's insatiable desire for land and materials.

Grethel Aguilar, the IUCN's acting director-general, said the updated list showed "Homo sapiens needs to drastically change its relationship to other primates, and to nature as a whole".

Lemurs, Madagascar's "treasure," are among the many precious species unique to the Indian Ocean island.

But the impoverished country is struggling to combat deforestation, poaching for food and the illegal pet trade.

Among the lemurs newly listed as critically endangered are the Madame Berthe's Mouse Lemur, the smallest primate in the world, and the Verreaux's Sifaka, part of the "leaping lemur" family.

Both have seen "substantial declines" because their habitats have been destroyed by slash-and-burn agriculture and logging.

Verreaux's Sifaka, which is known in one region as "sifaka of the cooking pot," is also threatened by hunting.

Across other parts of Africa, 53% of primate species – 54 of 103 – are now threatened with extinction, driven by bushmeat hunting and habitat loss, the IUCN report said.

Remco Van Merm, from its Global Species and Key Biodiversity Areas Programme, said the economic impact of the coronavirus pandemic was leaving some poor communities with "no choice but to resort to using natural resources to meet their daily needs".

"We are already seeing increasing levels of resource use, and not only in Madagascar," he said, calling for communities to be involved in conservation efforts.

Mittermeier said more lemurs may have already gone extinct if it was not for an initiative that helped fund local projects like ecotourism, reforestation and education.

While he expressed concern over the suspension of tourism due to the pandemic, he stressed that it "remains perhaps the best tool available" to ensure the survival of wild lemur populations.

Among the other animals added to the IUCN's critically endangered list was the North Atlantic Right Whale, estimating that there were fewer than 250 adults at the end of 2018 – some 15% lower than 2011.

Climate change appeared to be pushing the whales further north during summer into the Gulf of St Lawrence off Canada, where they are more likely to be struck by boats or become entangled in crab pot ropes.

Their reproductive rates were found to have dropped, which was also a factor in driving the European Hamster on to the critically endangered list.

While a female hamster had an average of over 20 offspring a year during the last century, today they give birth to only five or six.

It has now disappeared from three-quarters of its original habitat in the eastern French region of Alsace, and more than 75% of its territory in Eastern Europe.

Researchers are not sure what is driving the trend, but studies are focused on monoculture plantations, industrial development and global warming.

In 2017, the Research Centre for Environmental Protection in Alsace warned that with vast swathes of land turned over to maize and corn crops, the hamsters' diets had become so depleted of nutrients that they were eating their offspring.