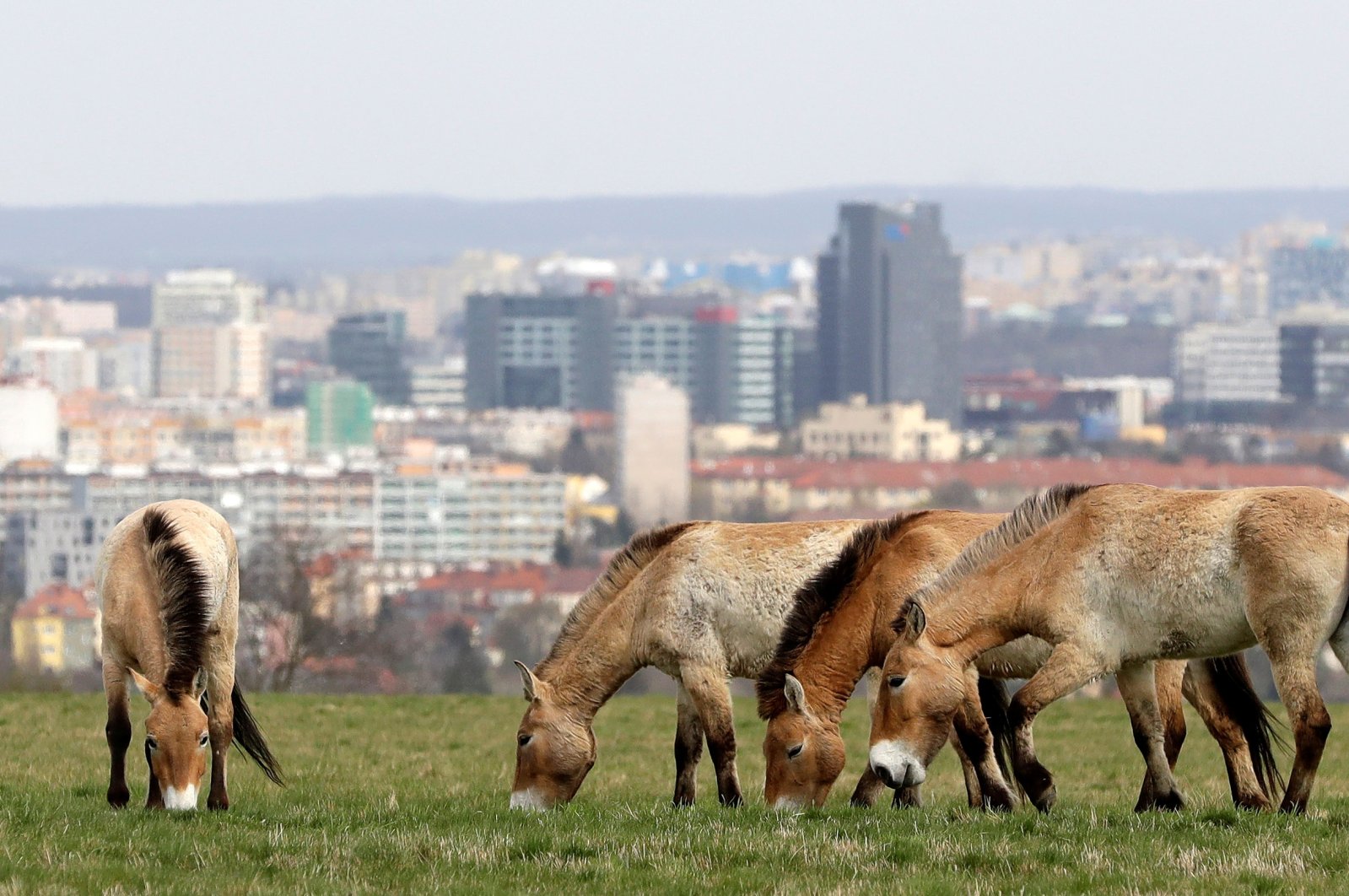 A herd of endangered Przewalski's horses grazes on a meadow inside of a breeding enclosure in Prague, Czech Republic, April 22, 2021. (REUTERS Photo)
by REUTERS Apr 22, 2021 9:07 pm
RECOMMENDED

Four rare Central Asian wild horses gallop through a meadow in Prague which aims to reintroduce this breed, that was once on the brink of extinction, through breeding programs. The city's zoo plans to expand a breeding program that aims to rebuild their numbers in the steppes of Asia.

The Prague Zoo released four Przewalski's horses on a 20-hectare (50-acre) plain that provides a breeding ground for the short, stocky animals while the zoo rebuilds their permanent stables and enclosure.

The horses – which weigh between 250 to 360 kilograms (550 to 795 pounds) – at one point were extinct in the wild but now inhabit reintroduction sites in Mongolia, China and Kazakhstan.

"This whole project aims to recreate a steppe environment here with its original fauna and flora with the horses' help," Prague Zoo director Miroslav Bobek said on Thursday as the four mares grazed with the city in the background.

The Prague Zoo has first relocated four mares named Khamiina, Xicara, Lana and Gruhne, choosing them to ensure the greatest possible genetic diversity for future breeding. The zoo will later introduce a stallion.

The zoo in 1959 was charged with managing the international studbook for the species, which once ranged throughout Europe and Asia. The institution has been a leader in reintroducing the animals back into the wild.

Their first shipment took place in 1988. Between 2011 and 2015, the zoo reintroduced 18 mares and one stallion into wild herds in the Khomyn Tal reserve and the Gobi B national park of Mongolia.

While visitors are encouraged not to feed the animals, zoo officials have built three viewpoints on previously unused land as they wait out the pandemic to restart shipping the horses back to their natural habitat in Asia.

"We had to cancel the transport of the horses to Western Mongolia last year and it will be the same this year," Bobek said. "However, we’re using this time to prepare a project of re-introducing the Przewalski's horses to the eastern parts of Mongolia."