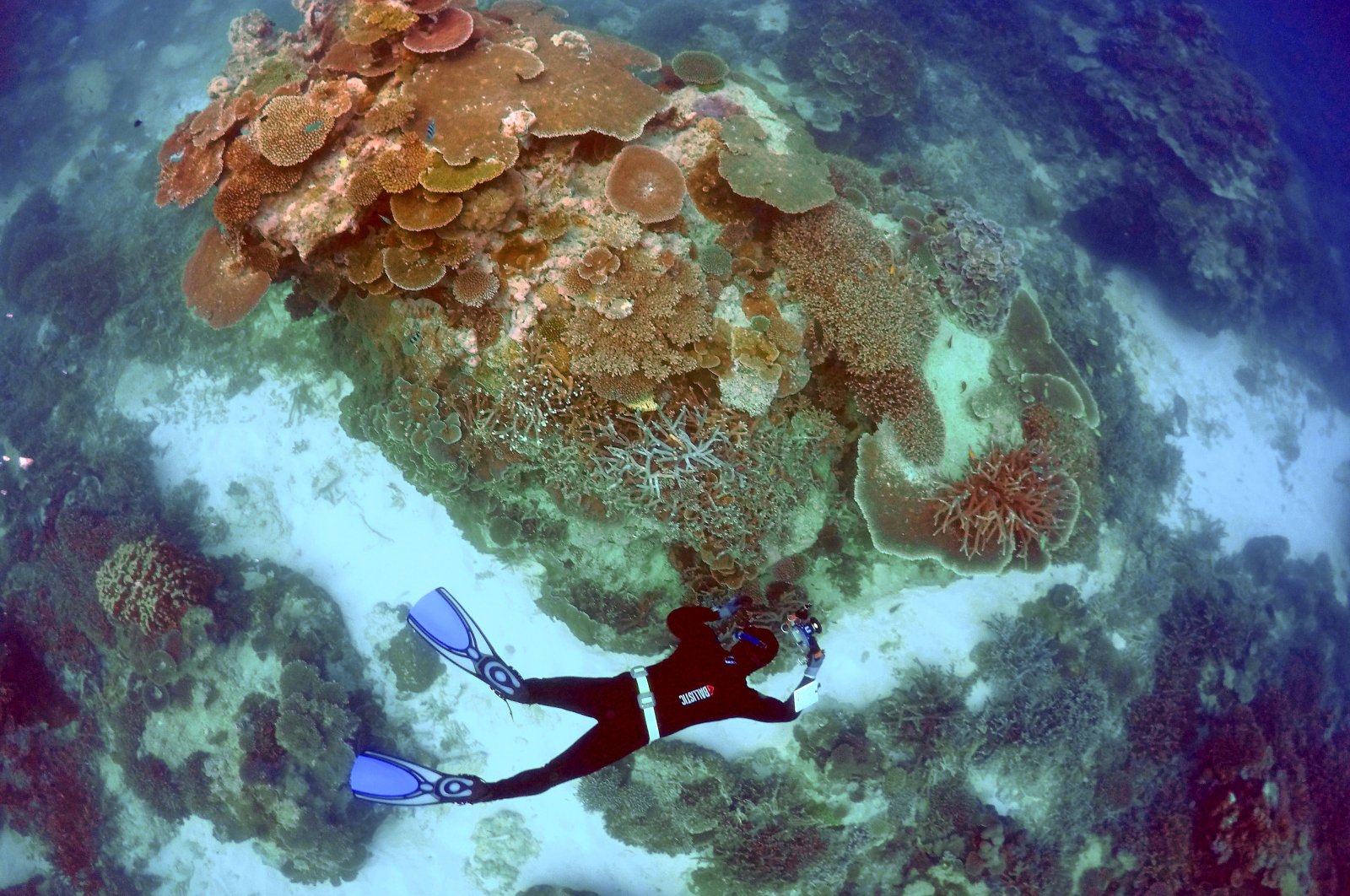 A senior ranger in the Great Barrier Reef region for the Queensland Parks and Wildlife Service takes photographs and notes during an inspection at Lady Elliot Island, June 11, 2015. (REUTERS Photo)
by Agencies Oct 14, 2020 10:25 am
Edited By Yasemin Nicola Sakay
RECOMMENDED

Australia's Great Barrier Reef has lost more than half of its coral population "across virtually all species" since the 1990s, according to a new study published Wednesday, as scientists fear the loss caused by frequent bleaching will compromise its ability to recover.

The number of small, medium and large corals in both shallow and deeper water declined by more than 50% between 1996 and 2017, researchers from Queensland's ARC Centre of Excellence for Coral Reef Studies at James Cook University found.

The study, published in the Proceedings of the Royal Society B journal, found that the worst-affected species were the branching and table-shaped corals, which provide the structures important for reef inhabitants including fish.

"The loss of these corals means a loss of habitat, which in turn diminishes fish abundance and the productivity of coral reef fisheries," the study states.

Declines were particularly pronounced in the regions affected by the record-breaking temperatures that triggered mass bleaching in 2016 and 2017. These mass bleachings have meant fewer small, baby corals and breeding adult ones, said Terry Hughes, co-author of the study.

"That means the resilience of the reef, its ability to bounce back from recurrent mass bleaching events, has been compromised," said Hughes.

"We used to think the Great Barrier Reef is protected by its sheer size, but our results show that even the world's largest and relatively well-protected reef system is increasingly compromised and in decline."

Bleaching early this year could have caused more damage to the reef's southern region, Hughes said. The reef suffered its most extensive bleaching event in March, the third one in five years.

The Great Barrier Reef is the world's most extensive coral reef ecosystem and the habitat of threatened species such as the dugong and large green turtle. It runs 2,300 km (1,429 miles) down Australia's northeast coast spanning an area half the size of Texas. It was world heritage listed in 1981 by UNESCO.

The researchers have attributed the decline of corals to climate change, which is "driving an increase in the frequency of reef disturbances such as marine heatwaves."

"There is no time to lose – we must sharply decrease greenhouse gas emissions ASAP," the authors warned.