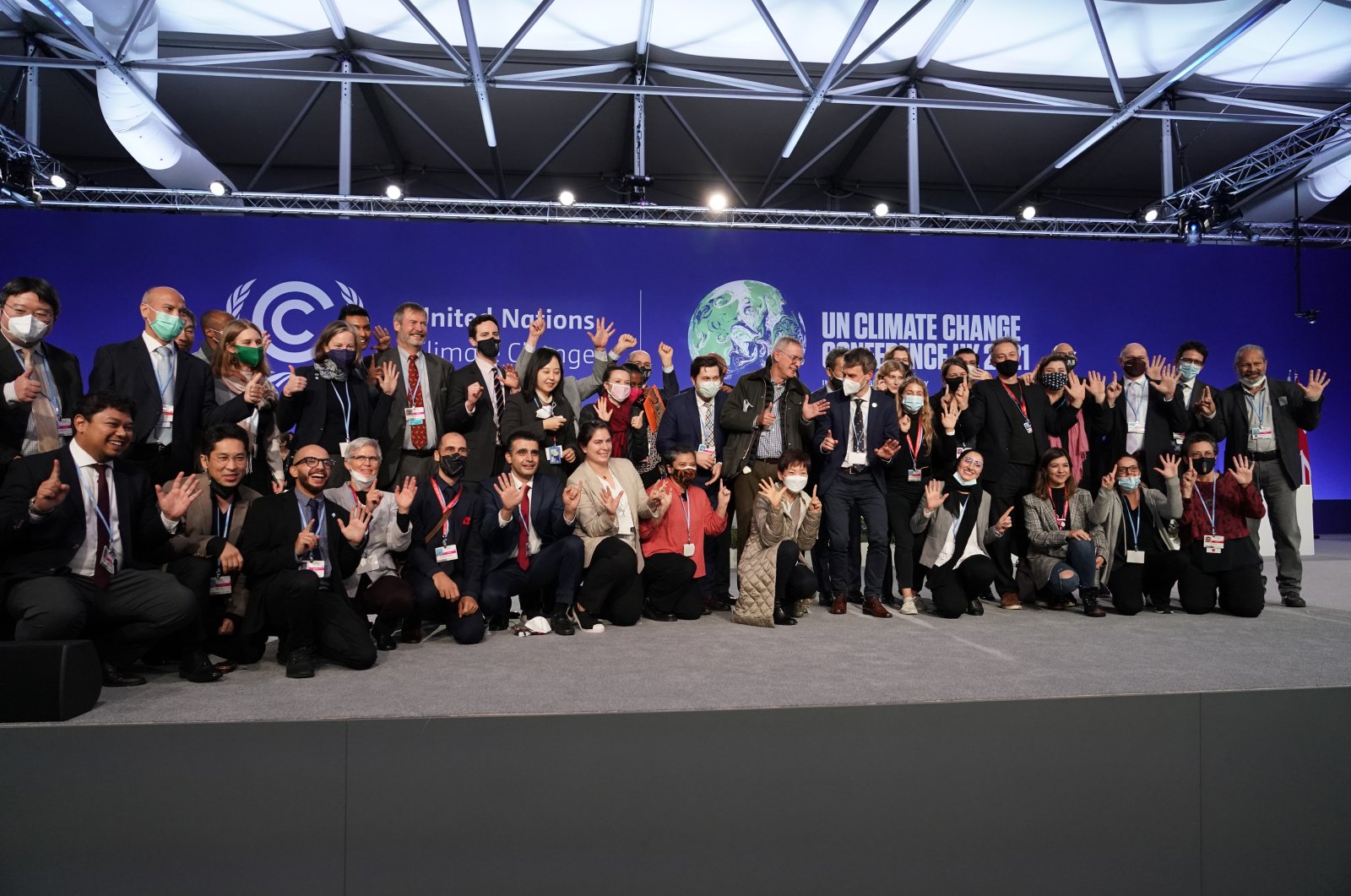 Delegates from different countries pose for a group photograph together on stage in the plenary room at the COP26 U.N. Climate Summit, in Glasgow, Scotland, Nov. 13, 2021. (AP Photo)
by French Press Agency - AFP Nov 13, 2021 11:11 pm
RECOMMENDED

With nearly 200 nations coming together Saturday to reach a global deal to combat climate change after two weeks of painful negotiation, it fell woefully short of what science says is needed to contain dangerous temperature rises.

Rich countries stood accused of failing at the United Nations Climate Change Conference, also known as COP26, in Glasgow to deliver much-needed finance to vulnerable states that are at risk of drought, rising seas, fire and storms.

Britain's COP26 president, Alok Sharma, rounded up the marathon negotiations by telling delegates: "It is now decision time. And the choices you are set to make are vitally important."

But there was last-gasp drama as China and India insisted that language on fossil fuels be weakened in the final summit decision text.

As the final deal was clinched, a tearful Sharma said, "I apologize for the way this process has unfolded. I am deeply sorry," before banging down his gavel.

They were also tasked with finding the funding for nations most at risk of climate-related droughts, floods and storms supercharged by rising seas.

Observers said the agreement fell far short of what is needed to avert dangerous warming and help countries adapt or recoup damages from the disasters already unfurling globally.

Sharma earlier told delegates in the final throes of marathon talks that they faced a "moment of truth for our planet, for our children and our grandchildren."

The final text urged nations to accelerate efforts to "phase down" unfiltered coal and "phase out" inefficient fossil fuel subsidies.

Large emitters China and India had opposed the mention of polluting fuels, and the language in the final text was significantly more nuanced than earlier drafts.

The deal also called on all countries to accelerate their emissions cuts by submitting new national plans by 2022, three years earlier than agreed in Paris.

But after resistance from rich nations led by the United States and European Union, the text omitted any reference to a specific finance facility for the loss and damage climate change has already caused in the developing world.

It instead only promised future "dialogue" on the subject.

"For some, loss and damage may be the beginning of conversation and dialogue," said Shauna Aminath, the Maldives environment minister. "But for us, this is a matter of survival."

The text noted "with deep regret" that wealthy nations had also failed to stump up a separate annual sum of $100 billion they promised over a decade ago. It urged countries to pay up "urgently and through 2025."

It also promised to double finance to help developing countries adapt to rising temperatures by the same date.

But developing nations said it was unfair for the summit to produce an unbalanced agreement heavily weighted toward "mitigation" – how economies can ditch fossil fuels and reach net-zero emissions by 2050.

They wanted specific instruction on how they can meet the bill of decarbonizing while also adapting to the natural disasters supercharged by global warming.

"We were told that COP26 was the last best chance to keep 1.5 degrees Celsius alive, but it's been placed on life support," said Amanda Mukwashi, CEO of Christian Aid.

"Rich nations have kicked the can down the road and with it the promise of the urgent climate action people on the front line of this crisis need."

The two weeks in Glasgow saw a number of high-profile announcements from world leaders, such as a commitment to slash methane emissions by 30% by 2030.

It also witnessed mass protests against what activists said was a dangerous lack of urgency.

Teresa Anderson, a climate policy coordinator at ActionAid International, said COP26 was "an insult to the millions of people whose lives are being torn apart by the climate crisis."