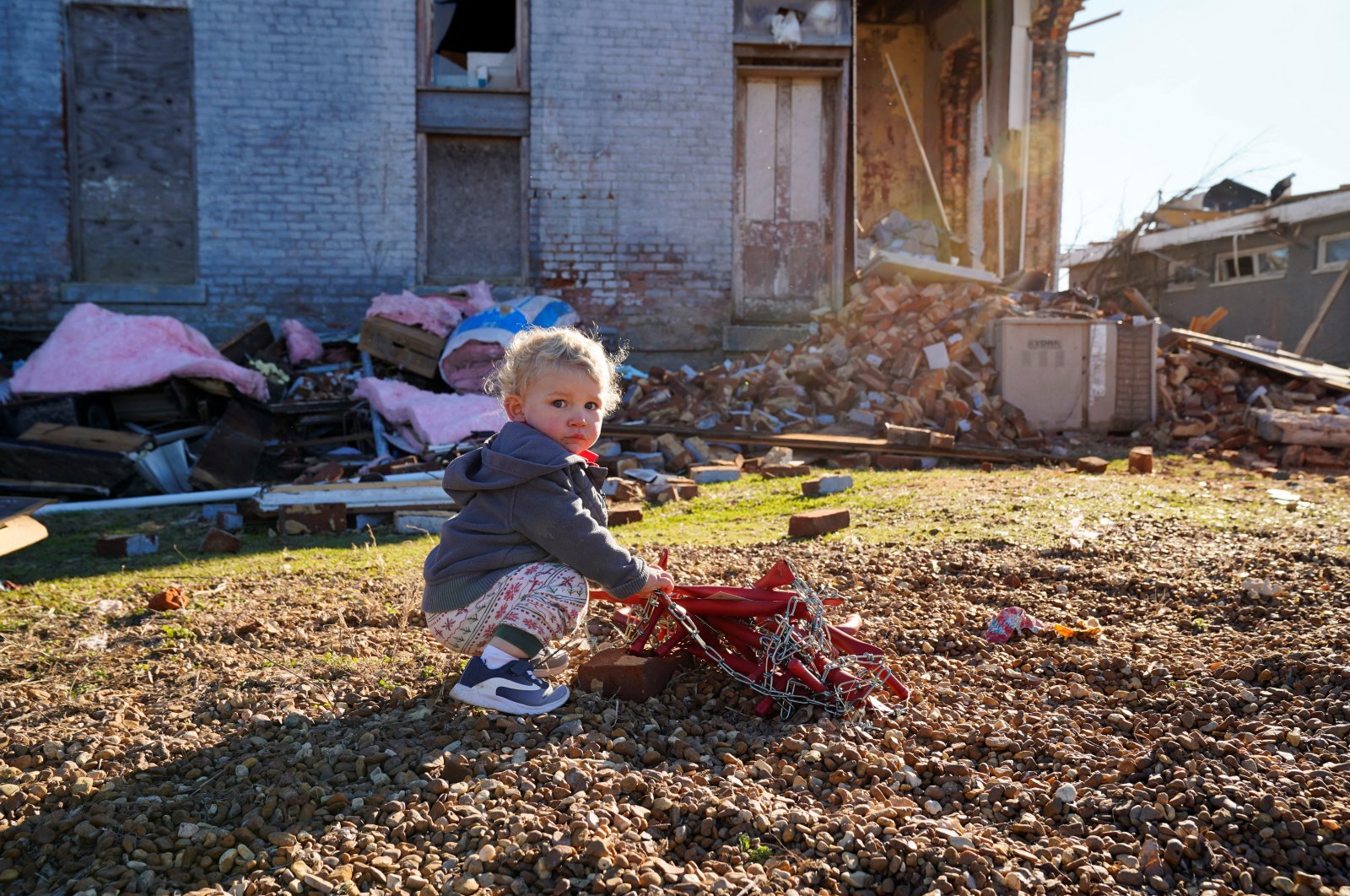 Gus Hart, 1, plays outside the home the Hart family had been renovating, with plans to move into, after a devastating outbreak of tornadoes ripped through several U.S. states in Mayfield, Kentucky, U.S., Dec. 12, 2021. (Reuters Photo)
by French Press Agency - AFP Dec 13, 2021 1:34 pm
RECOMMENDED

The last couple of years has been all about new normals, not only in terms of social interactions but also climate change. Natural disasters, particularly the summer of 2021 with wildfires, flooding and extreme heat waves, wreaked havoc across the globe. More extreme, destructive and deadly storms, like tornadoes, are likely to follow with the effects of climate change taking root, the top United States emergency management official said Sunday after massive tornadoes ravaged six states.

Meteorologists and other scientists have long warned of the growing intensity of weather events like storms, fires and flooding.

But the crisis hit home in a terrifying way overnight Friday into Saturday when more than two dozen twisters raked across large swaths of the American heartland, leaving more than 90 people dead, dozens missing and communities in ruin.

“This is going to be our new normal,” Deanne Criswell, head of the Federal Emergency Management Agency, told CNN's “State of the Union” as she did a round of national Sunday morning talk shows before she headed to Kentucky to assess the damage and help coordinate the federal response.

“The effects that we're seeing from climate change are the crisis of our generation,” the FEMA chief added.

Criswell warned of the challenge that the United States faces in addressing such severe weather events.

“The focus I'm going to have is, how do we start to reduce the impacts of these events?”

The tornado that reduced several towns to rubble was a gargantuan twister. It rumbled along the ground for over 320 kilometers (200 miles), one of the longest, if not the longest, on record.

U.S. President Joe Biden said Saturday the storm system was likely “one of the largest tornado outbreaks in our history.”

And while he stressed that the impact of climate change on these particular storms was not yet clear, “we all know everything is more intense when the climate is warming – everything.”

Scientists have stopped short of conclusive determinations that more violent storms are the result of climate change, but they agree that evidence is building.

One paper published recently by the scientific association AGU says its analysis “suggests increasing global temperature will affect the occurrence of conditions favorable to severe weather.”

Daniel Swain, a UCLA climate scientist, tweeted Saturday in response to the study, saying that while the effect of climate change on severe weather like tornadoes is not well established, “there is a growing body of research (including this late-breaking paper) suggesting that warming likely does increase such risks in many regions globally.”