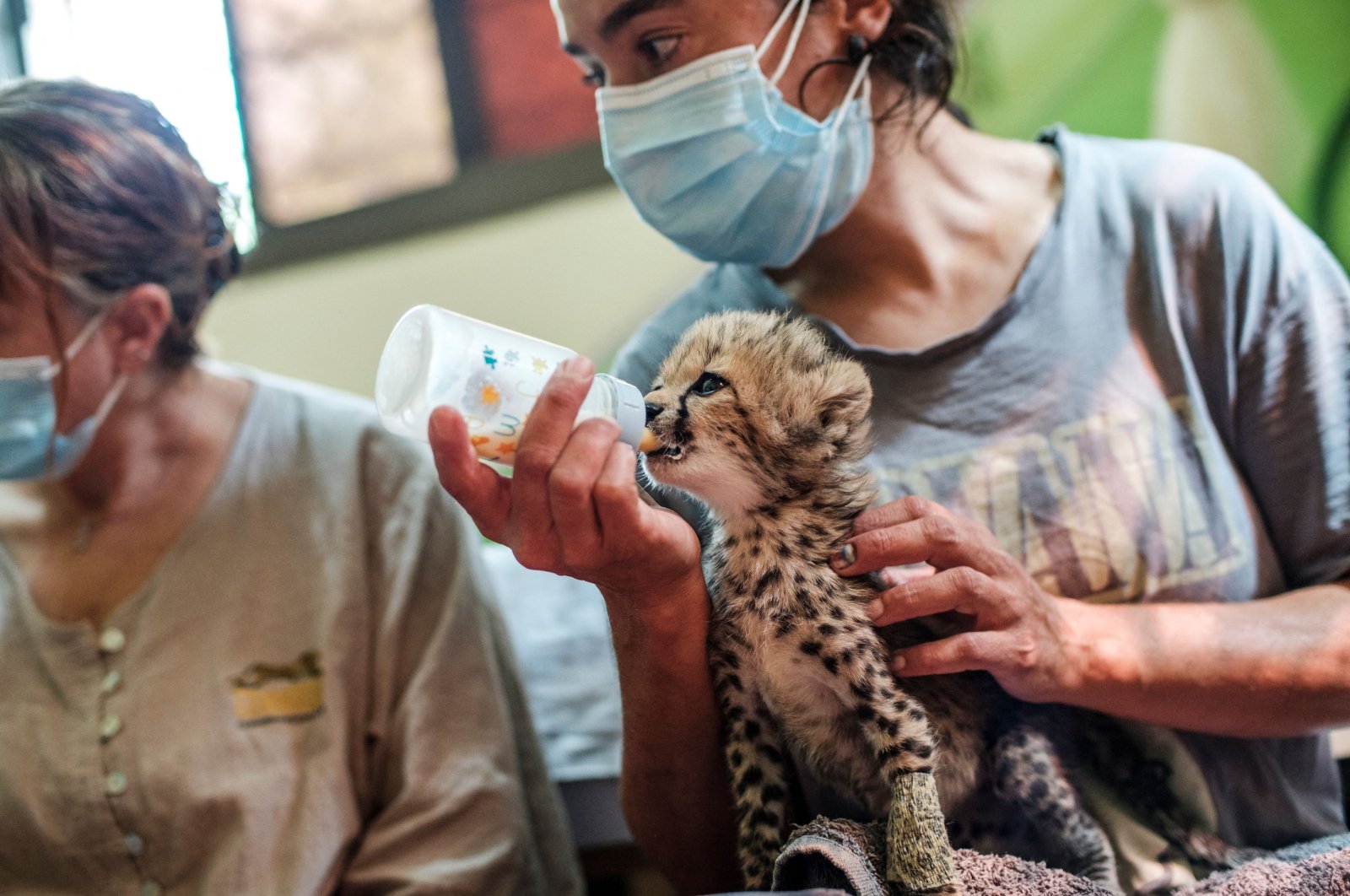 A member of the Cheetah Conservation Fund feeds a baby cheetah in one of the organization's facilities in Hargeisa, Somaliland, on Sep. 17, 2021. (AFP Photo)
by French Press Agency - AFP Nov 12, 2021 9:21 am
RECOMMENDED

Around half the cubs saved from traffickers do not survive the trauma – and there are real concerns for the smallest of this lot, a frail infant nicknamed "Green" weighing just 700 grams (25 ounces).

"It was very touch and go with Green," said Laurie Marker, founder of the Cheetah Conservation Fund (CCF), inspecting the mewling cub at the nonprofit organization's rescue center in Somaliland.

They are the lucky ones – every year an estimated 300 cheetah cubs are trafficked through Somaliland to wealthy buyers in the Middle East seeking exotic pets.

Snatched from their mothers, shipped out of Africa to war-torn Yemen and onward to the Gulf, cubs that survive the ordeal can fetch up to $15,000 on the black market.

It is a busy trade, one less familiar than criminal markets for elephant ivory or rhino horn, but equally devastating for Africa's most endangered big cat.

A century ago, there were an estimated 100,000 cheetahs worldwide. Today barely 7,000 remain, their numbers slashed by human encroachment and habitat destruction.

The steady plunder of cubs from the wild to satisfy the pet trade only compounds this decline.

More than 3,600 live cheetahs were illegally traded worldwide in the decade to December 2019, according to research published this year that documented hundreds of advertisements for cubs on social media platforms including YouTube and Instagram.

"If this keeps going... that kind of offtake causes the population to go extinct in a very short time," said Marker, a leading authority on cheetahs.

Cheetahs have been prized as pets and hunting companions since the Roman Empire and breeding them in captivity is notoriously difficult, making wild-caught cubs the only option.

Part of the campaign to stop the modern-day trade has focused on changing attitudes in prosperous Gulf states, the main buyer market where cheetahs are still coveted status symbols.

Marker said wealthy owners liked to show off their cheetahs in selfies as much as their cars and cash.

"There's kind of a one-upmanship on it, and there's bragging power. One of our messages is do not 'like' this kind of thing on social media," Marker said.

Combatting this criminal trade is particularly challenging because it revolves around Somaliland, a self-declared republic without international recognition, and one of the world's poorest regions.

Roughly the size of Syria, with 850 kilometers (530 miles) of coastline facing Yemen, the breakaway region between Ethiopia, Djibouti and Somalia is stretched thin policing its porous borders.

Somaliland's Interior Minister Mohamed Kahin Ahmed told Agence France-Presse (AFP) that a small coastguard unit was doing its best but apart from patrolling for cheetahs, they had human traffickers and gun runners to contend with.

The cubs that slip through the net suffer terrible mistreatment along the smuggling route, fed improperly and confined to tiny cages, sometimes with their legs bound with zip ties.

Marker said one particular seizure in 2019 illustrated the cruelty: "When they dumped them out, there were live ones dying on top of dead ones... It was just horrible," she said.

In recent years, confiscations have soared as the government has cracked down on the trade.

From just a handful of cubs in 2018, today CCF shelters 67 rescued cheetahs across three safe houses in the Somaliland capital Hargeisa.

Laws criminalizing the sale of cheetahs have also started being enforced.

In October 2020, a smuggling ring was shattered and a high-profile trafficker prosecuted in a landmark trial.

Through a U.K. government-funded program, Somaliland is expanding intelligence sharing with neighboring countries and Yemen to fight the criminals robbing Africa of the iconic species.

But the government is also working with impoverished rural communities, whose conflict with cheetahs is another driver in the trade.

Of the 13 cubs confiscated between September and November, at least four were taken by farmers hoping to sell them and recoup losses after claiming their livestock were killed by cheetahs.

"The next generation may never see a cheetah if this illicit trade continues," Edna Adan Ismail, Somaliland's former foreign minister, told an anti-poaching conference in September.

Local veterinarian Ahmed Yuusuf Ibrahim is determined this grim prophecy does not pass.

The 27-year-old has been learning how to nurse sickly cubs back to health and has developed a close fondness for the cheetahs under his care.

They cannot fend for themselves, and eventually will be relocated to a larger natural enclosure outside Hargeisa.

But for now, Ibrahim is their doting custodian – right down to making sure cheetahs young and old get their fair share of camel meat.

"I care for them. I feed them, I clean them. They are my babies," he said.