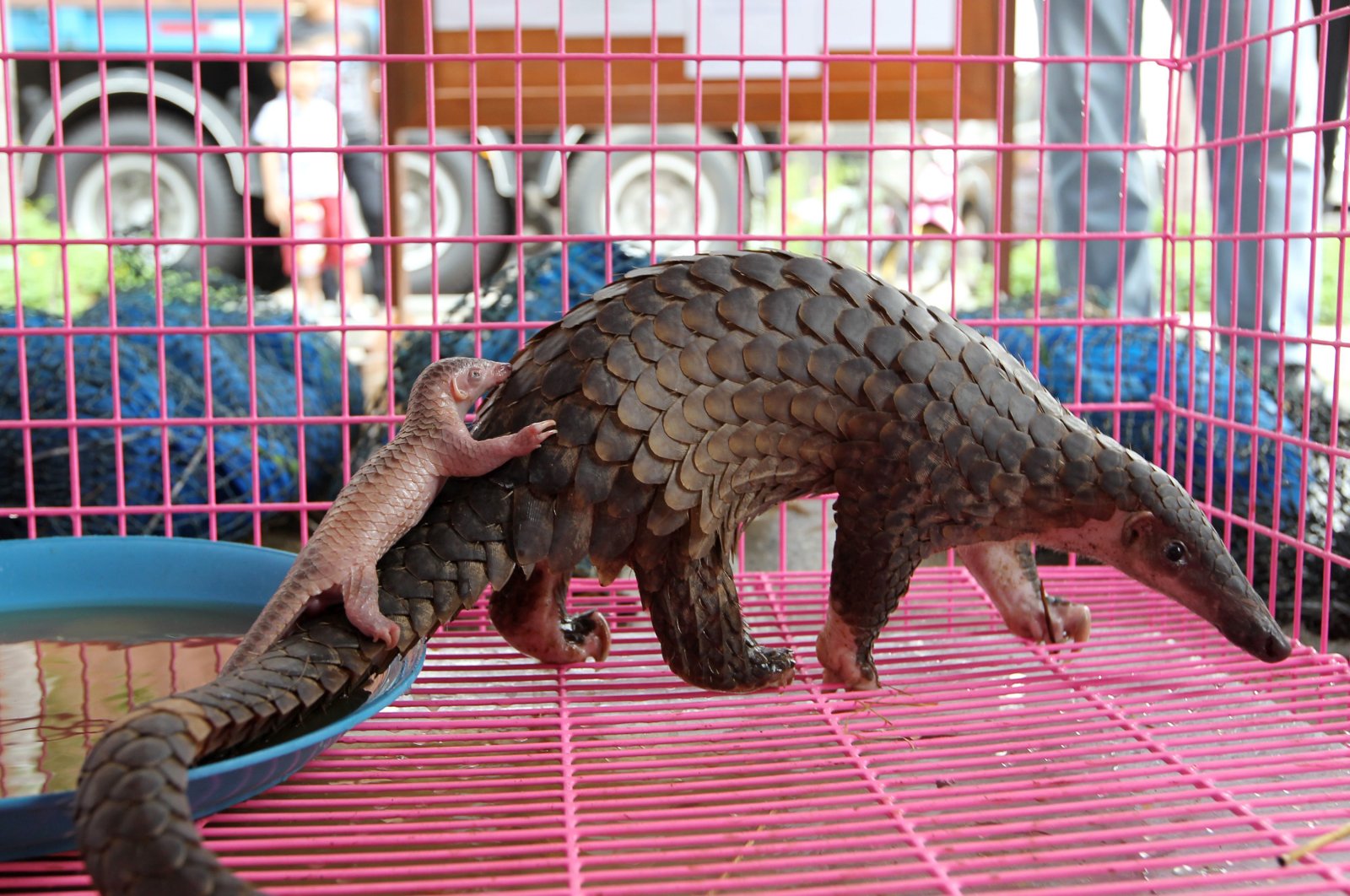 A newborn confiscated smuggled baby pangolin with its mother inside a cage during a news conference in Bangkok, Thailand, April 20, 2011. (EPA Photo)
by DAILY SABAH WITH AGENCIES
May 01, 2020 10:15 am

As the coronavirus pandemic diverts attention and funds from wildlife protection to public health and global lockdowns deprive rural poor of desperately needed income, countries around the globe are witnessing an uptick in poaching of endangered species.

The Wildlife Justice Commission (WJC) on Wednesday reported stockpiling of ivory and other animal products as borders remain shut. In addition to the illicit trade of these products, the WJC cautioned that authorities risked leaving endangered species more vulnerable to poachers as they enforce lockdowns.

“A major concern is that poaching incidents may increase during the lockdown period, as criminal networks exploit perceived opportunities of park closures, reduced patrols in protected areas or the diversion of law enforcement resources to deal with COVID-19 issues,” it said.

Poachers in Nepal are taking advantage of slack monitoring and sparse public movement during the COVID-19 lockdown, with the country seeing a surge in killing of wildlife under the shadow of the coronavirus pandemic.

Tashi Lhamu Sherpa, deputy mayor of the Khumbu Pasang Lhamu Rural Municipality, said the endangered animals were killed in a trap in a forest near Namche, a town on the way to Everest Base camp.

The poachers removed the glands, referred to as musk pods, from two male deer.

"Locals spotted the dead deer before the poachers could harvest the musk pods from the rest of deer that had fallen to the trap," Sherpa told the German Press Agency (DPA).

Musk pods, found in the male musk deer, are reportedly used to make perfumes, cosmetic products and Chinese herbal medicine. They are highly sought after commodities on the black market.

"Our studies show that most of the musk pods are smuggled to China," said Bhumiraj Upadhyaya, chief conservation officer of Sagarmatha National Park.

In the first 10 days of the lockdown that began on March 24, an elephant and three crocodiles were killed by poachers, officials said.

"We have increased patrolling following a rise in the movement of poachers, but it’s not surprising as we were expecting that something like this would happen," Bishnu Prasad Shrestha, a spokesperson for Nepal's Department of National Park and Wildlife Conservation (DNPWC), told DPA on April 4.

DNPWC officials said that three critically endangered Gharial crocodiles were killed around Chitwan National Park, while the elephant was found electrocuted in the buffer zone of the Bardiya National Park in western Nepal.

Some are turning to poaching as COVID-19 lockdowns deprive them of much-needed income. In Cambodia, the killing of three critically endangered giant ibis birds in early April was believed to have been driven by economic desperation amid the lockdown.

Three giant ibis were killed in a "single deliberate poisoning event,” according to the country's Wildlife Conservation Society. The group said the bird killings were part of a growing poaching trend amid economic disruptions due to coronavirus.

The giant ibis is a protected species only found in Cambodia where the population is estimated to be less than 300. The three birds were illegally killed for their meat and were found on April 9 inside a wildlife sanctuary, WCS said in the statement.

WCS country director Ken Serey Rotha told the Phnom Penh Post newspaper on Tuesday that wildlife hunters had used the pesticide carbofuran to kill the birds, which could further poison other animals and people if the birds were eaten.

The bird meat would have been consumed locally or sold at the market, WCS said.

Colin Poole, WCS's Greater Mekong regional director, said conservationists' continued commitment to local people in rural areas was important now more than ever, since they have no social safety net, and are on the front lines of the defense of forests and wildlife in their areas.

"Suddenly, rural people have little to turn to but natural resources, and we're already seeing a spike in poaching," Poole said in the statement.

In addition to the giant ibis poisoning, more than 100 painted stork chicks were poached in a separate incident in March at the nation's Prek Toal Ramsar Site, which is the largest waterbird colony in South-East Asia, according to WCS.

The WJC said Wednesday that a ban on the sale of wild animals in China was causing backlogs in smuggling networks of pangolin scales and ivory across Southeast Asia. However, criminal gangs are adapting to tighter border controls amid the pandemic.

In Vietnam alone, smugglers had access to more than 22 tons of pangolin scales, the WJC said.

"Brokers have made it clear that they intend on returning their operations to previous levels as soon as possible," Sarah Stoner, WJC's director of intelligence, told Agence France-Presse (AFP).

She said she expected high-value wildlife smuggling to rebound whenever COVID-19 restrictions are lifted.

The pangolin, an endangered species, is one of the most trafficked animals on earth, fueling a multi-billion-dollar trade for their scales, prized as medicine in many Asian countries.

Travel restrictions are also pinching conservation efforts as wildlife sanctuaries can no longer lean on foreign volunteers to keep operations running. In South Africa, a rhino orphanage in Limpopo province was suddenly deprived of volunteers who regularly fly in from abroad to help keep the center running.

Manager and founder Arrie van Deventer, a 66-year-old retired teacher, made frantic pleas on social media for South Africans to help out.

"We were swamped," he said. He picked two volunteers from the several hundred offers. They are now staying put with the four permanent staff since last month's nationwide lockdown imposed by President Cyril Ramphosa.

The center has the tough job of looking after an orphaned baby rhino whose mother was killed by poachers when it was 7 days old. Mapimpi was dehydrated and withered. They found him trying to eat sand. Now he seems well-fed, relaxed and playful. At the age of 5, the rhinos in the orphanage are released back into the wild.

"We have dozens of rhinos that come through here, and 95% of them are because of the poaching pandemic," Deventer said. The precise number, like the sanctuary's location, are closely guarded secrets in order to protect them from poachers.

The game reserve adjacent to the orphanage has been attacked, unsuccessfully, twice.

Africa's rhino population has been decimated over the decades to feed demand for rhino horn, which, despite being made of the same stuff as hair and fingernails, is prized in East Asia as a supposed medicine and as jewelry.

Financial pressures are being felt by wildlife reserves and conservancies across Africa, where money from tourism and foreign donations typically bankrolls efforts to protect the continent's most endangered animals from poachers and habitat loss.

The Limbe Wildlife Centre in western Cameroon, home to hundreds of gorillas, chimpanzees and other primates, has seen half its revenues evaporate in recent months with park visits canceled and cash-strapped donors in the U.S. and Europe freezing their contributions in response to the COVID-19 pandemic.

Without a resumption of funding within the next three months, the center, a partnership between the Cameroonian government and an international foundation, could be forced to close its doors, said Guillaume Le Flohic, the park manager.

Besides vulnerable primates like mandrills, the Limbe center rescues dozens of African gray parrots, one of the world’s most trafficked animals, each year.

Le Flohic said he did not know what would happen to the animals if the park cannot come up with the more than $15,000 it needs for monthly operating expenses.

"All our activity and the reason why we are working here, we will have to put that on hold and that is really not a situation I want to be in, but that is the situation we may face," he said.