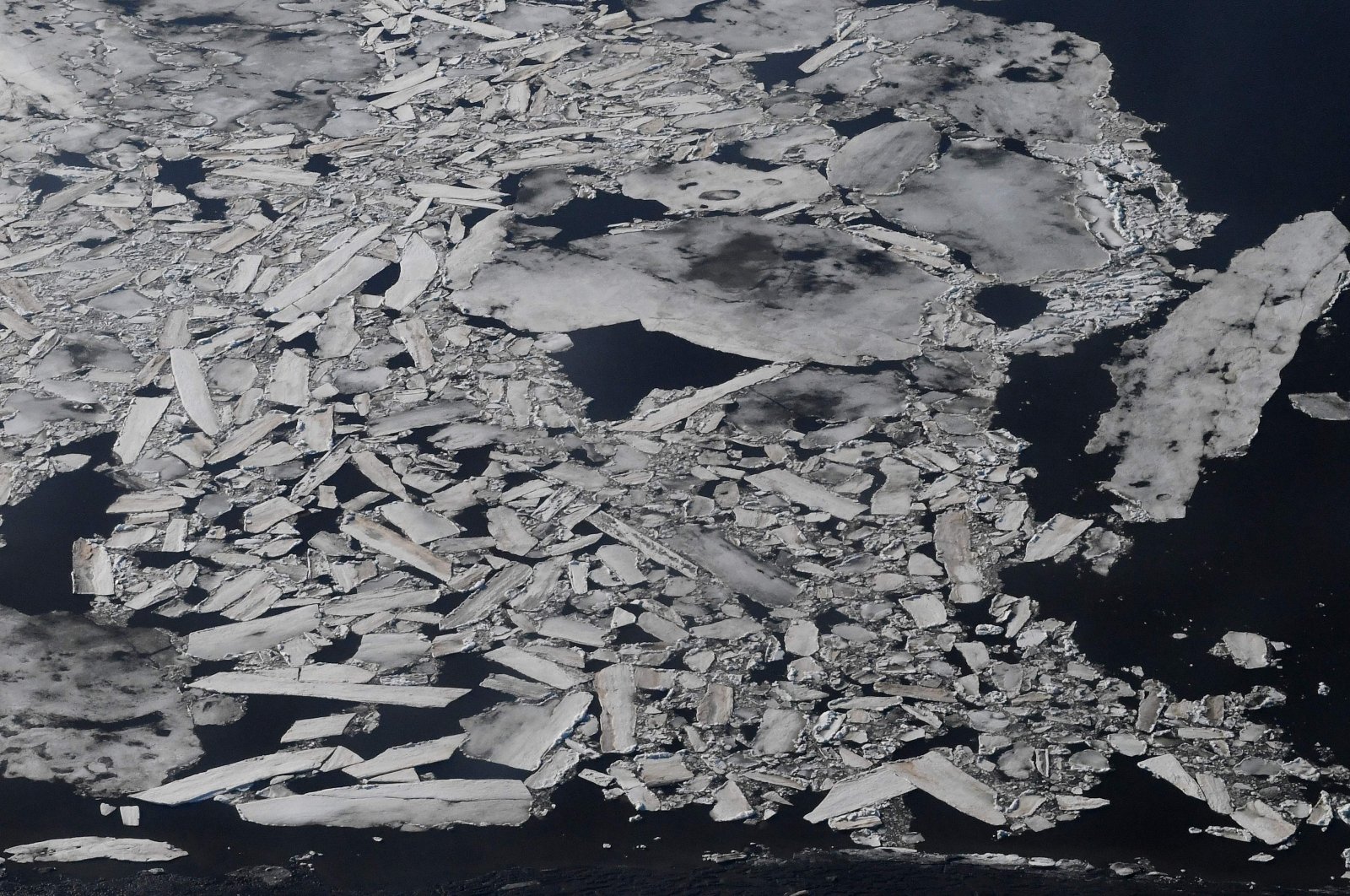 Ice breaks up early on the Kuskokwim River beside the Bering Sea and near the climate change-affected Yupik Eskimo village of Quinhagak on the Yukon Delta in Alaska, April 12, 2019. (AFP Photo)
by REUTERS Sep 03, 2020 12:41 pm
Edited By Yasemin Nicola Sakay
RECOMMENDED

The Bering Sea ice cover during the winters of 2018 and 2019 hit new lows not seen in thousands of years, scientists reported Wednesday, adding to concerns about the accelerating impact of climate change in the Arctic.

Satellite data provides a clear picture of how sea ice has changed over the last four decades in the region between the Arctic and northern Pacific oceans. Beyond that, the only ice records available were those recorded in ship logs and other observations.

So scientists turned to peatland, which holds organic compounds from plants dating back millennia, on the remote St. Matthew island off Alaska.

By examining different forms of oxygen molecules trapped in the sediment, the scientists were able to estimate atmospheric and ocean conditions that would have affected rainfall and sea ice over some 5,500 years, according to the study published in the journal Science Advances.

"The island in itself has acted as its own weather station," said study co-author Matthew Wooller, director of the Alaska Stable Isotope Facility at the University of Alaska Fairbanks. The sediment layers in the peat cores serve as a "book going back in time."

With the Arctic warming rapidly in recent decades, the extent of sea ice over the northern polar region has steadily waned. This year saw summertime Arctic sea ice hit its lowest level for July in 40 years of record keeping.

Sea ice builds up again each year during the winter. But the new study suggests that, in the Bering Sea, cold-season ice maximums may also be in decline.

The loss of sea ice is already impacting arctic wildlife, including walruses, polar bears and seals, with consequences for indigenous communities that rely on hunting for their livelihoods.

Shrinking sea ice also exacerbates warming in the region, as ice is replaced by patches of dark water that absorb solar radiation rather than reflecting it back out of the atmosphere.

"Obviously, if we lose the sea ice you are completely changing the temperatures of the Arctic," said Julienne Stroeve, a climatologist with National Snow and Ice Data Center at the University of Boulder Colorado, who was not involved in the study. "If you lose it all, you're going to warm up the region even faster."

Air temperature was not the only factor found to be affecting sea ice, though. Shifts in ocean and atmospheric circulation linked to climate change have an even bigger impact, said lead author Miriam Jones, a geologist at the U.S. Geological Survey.

"There's a lot more going on than simply warming temperatures," Jones said. "We're seeing a shift in circulation patterns both in the ocean and the atmosphere."

The study noted that changes in sea ice appeared to lag at least several decades behind changes in atmospheric greenhouse gases. That implies that the recent lows in winter sea ice were a response to greenhouse gas levels decades ago.

The researchers checked their findings against four decades of satellite data on the sea ice. Stroeve suggested that the study could have been strengthened with more comparisons against observational data gathered by ships and whaling expeditions dating back to the mid-19th century.