'It’s going to get worse if we don’t do anything': Plastic pollution flowing into oceans to triple by 2040 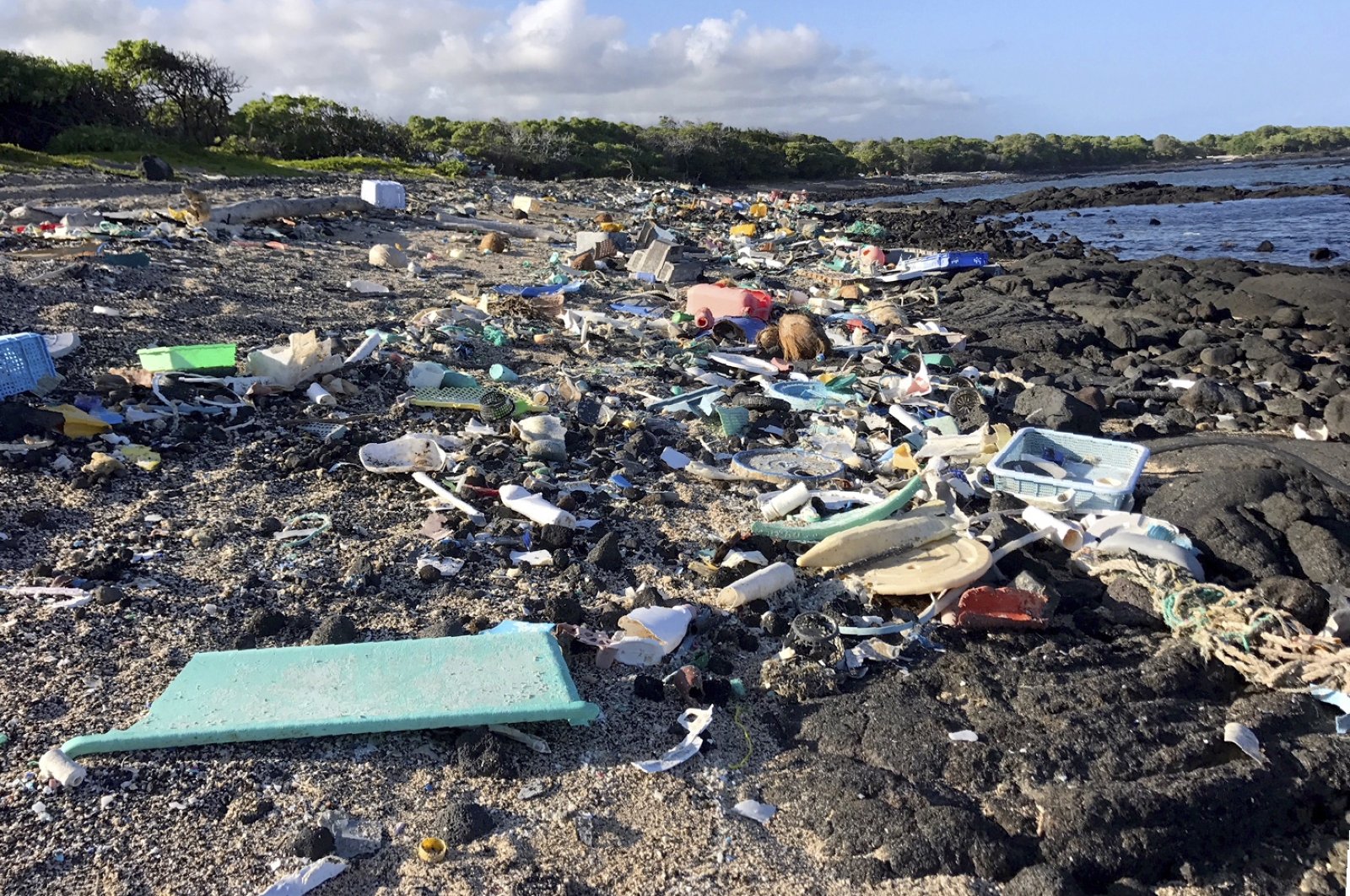 This photo provided by the Hawaii Wildlife Fund shows the beach at Kamilo Point in Naalehu, Hawaii, before a cleanup event, August 2018. (AP Photo)
by REUTERS Jul 23, 2020 10:12 pm
RECOMMENDED

The amount of plastic waste flowing into the ocean and killing marine life could triple in the next 20 years, unless companies and governments can drastically reduce plastic production, a new study published on Thursday said.

Single-use plastic consumption has increased during the coronavirus pandemic, according to the International Solid Waste Association, an NGO. Face masks and latex gloves are washing up daily on Asia's remote beaches. Landfills worldwide are piled high with record amounts of takeaway food containers and online delivery packaging.

The new research, produced by scientists and industry experts for The Pew Charitable Trusts and SYSTEMIQ, offers solutions that could cut the projected volume of plastic entering the ocean by more than 80%.

The roadmap for stemming the runaway ocean plastic waste crisis is among the most detailed ever offered in a study.

If no action is taken, however, the amount of plastic going into the sea every year will rise from 11 million tons to 29 million tons, leaving a cumulative 600 million tons swilling in the ocean by 2040, the equivalent weight of 3 million blue whales, according to the study published in the journal Science.

"Plastic pollution is something that affects everyone. It isn't a 'your problem and not my problem.' It's not one country's problem. It's everyone's problem,” said Winnie Lau, senior manager at Pew and co-author of the study.

"It's going to get worse if we don't do anything."

The strategy laid out in the report includes redirecting hundreds of billions of dollars in plastic production investment into alternative materials, recycling facilities and waste collection expansion in developing countries.

This would require a U-turn by the energy industry, which is rapidly building new chemical plants around the world to boost plastic output as its traditional fuel business is eroded by a rise in cleaner energy sources.

The amount of plastic produced annually has been climbing fast since 1950, when global production totaled 2 million tons. In 2017, that number was 348 million tons, and is expected to double again by 2040, the study estimates.

Big plastic makers, including ExxonMobil, Dow and Chevron Phillips Chemical, have said they are committed to tackling plastic pollution, despite increasing production. The projects they fund focus on cleaning up waste.

The plastic industry has lobbied against government bans on single-use plastic.

Some of the biggest buyers of plastic are consumer goods companies like Coca-Cola, PepsiCo, Nestle and Unilever. They have all made commitments to use a greater amount of recycled content in products in the future.

But current government and corporate commitments will only reduce the amount of plastic flowing into the ocean by 7% by 2040, the Pew and SYSTEMIQ study finds.

To cut the flow of ocean plastic by 80%, paper or compostable alternatives to single-use plastic would be needed and packaging should be redesigned to more than double the share of recyclable material, the study says.

Some criticized the study's inclusion of incineration, chemical recycling and plastic-to-fuel plants as ways to dispose of waste, saying these methods involve the release of climate-warming carbon emissions while also helping to sustain plastic production.

Instead, "we would be putting more emphasis on the need for reduction and stemming production of plastics," said Von Hernandez, global coordinator at Break Free From Plastic, an NGO.

"If the industry were allowed to continue with their projections of growth up to 2050, which quadruples production during this time, most of the recommendations from this report will be meaningless."