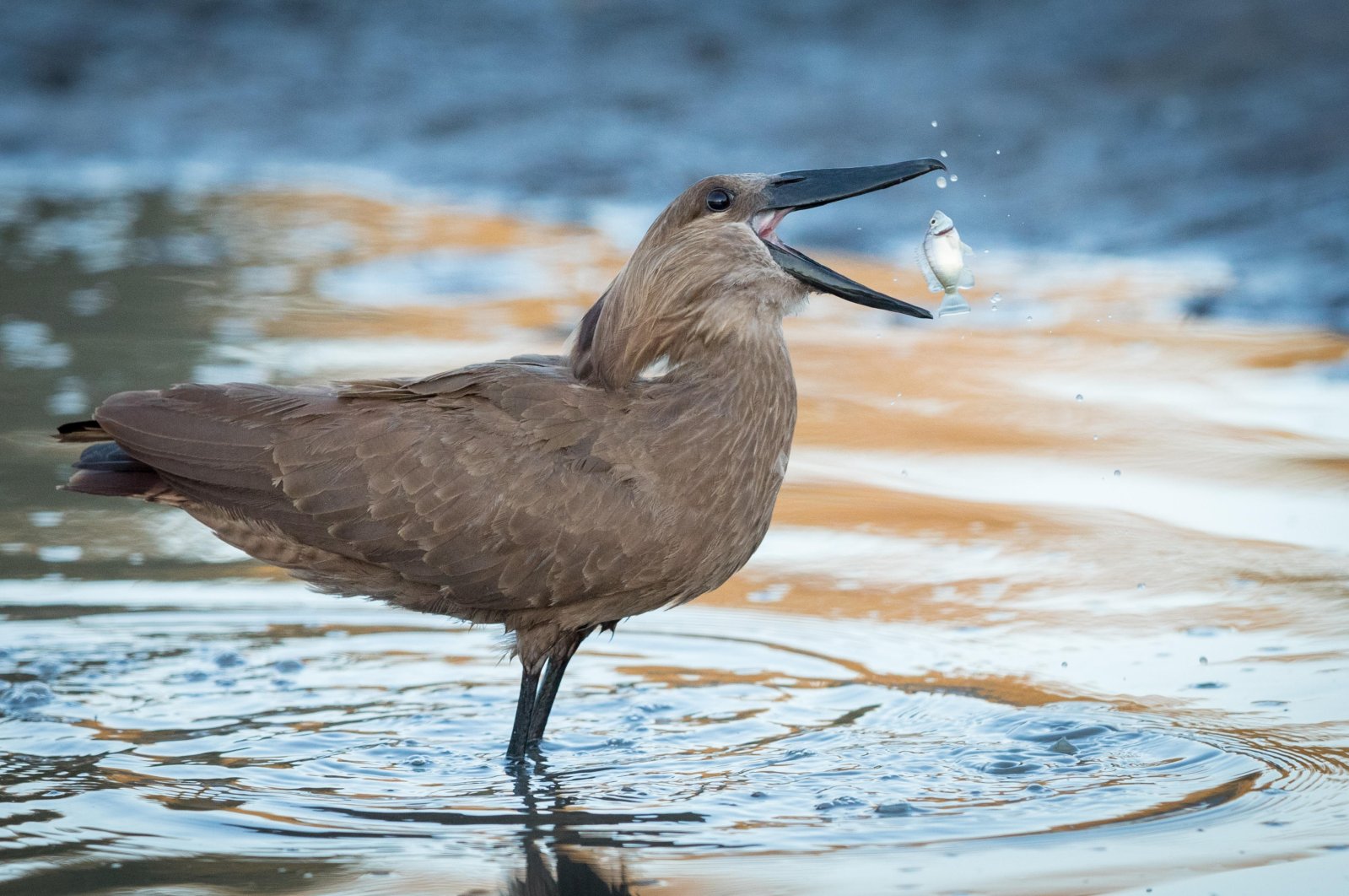 A hammerkop, also known as a hammerhead, eats a fish in the Okavango Delta of Botswana. (Reuters File Photo)
by Anadolu Agency Nov 21, 2021 11:20 am
RECOMMENDED

Kenyan fishermen and helpful native birds maintain a balanced coexistence that benefits both parties as well as the environment near Lake Naivasha.

On an average day at the lake's Karagita Beach, fishermen come in with a new catch and pack the fish into crates, while others prepare nets to venture into the lake.

Near the lake, fishing boats bob on light waves in a sort of chaotic dance as a hammerhead, a beautiful bird with huge eyes and uniform pale-brown feathers, alights upon a fisherman's net and starts looking for fish and frogs stuck in nets.

Ambrose Ndima is close to the bird and he is joined by five others, but the bird does not appear to be afraid.

"The birds are like this, they don't fear us fishermen because we believe them to bring good luck as they never disturb us. This is a bird that is totally not afraid of man because despite it being a wild animal we coexist and live in harmony," Ndima said, referring to hammerhead birds that are always by their side.

The 36-year-old fisherman, who is a father of two, told Anadolu Agency (AA) that the bird truly helps the environment.

"This bird helps us by cleaning the beach. It will pick up everything from twigs, cloth, old nets, plastics, papers and plant matter to make its nest. This way, it also cleans up the beach," Ndima said while pointing at a tree where a huge nest sat.

On the lake's shore, the birds pick up pieces of cloth and old nets and fly up to nests before coming back for more trash near the lake.

"That is its nest. It is very durable and very big. The many wild ducks that you see around us also use the nests for breeding. The hammerhead birds create so many nests per season and they abandon their old ones and make new ones," said Ndima.

Samuel Muthiga, another fisherman, said: "It is a peaceful bird that never bothers anyone. It will not go near the market and eat grains, fruits or vegetables being sold there. It also brings beauty and makes us fishermen feel at peace. They are our best friends here."

The hammerhead bird is also called hammerkop or anvil head. It received its name from the shape of its head, which resembles a hammer with a crest on its back that looks like the claw of a hammer and a beak resembles a hammer's head.

"We have so many local names for the bird, but its English name is hammerhead. There are also myths and stories about them depending on your tribe. They mainly eat small fish, snails, insects and frogs. We love them not only because of the environmental work they do but also because they are our friends," Muthiga said.