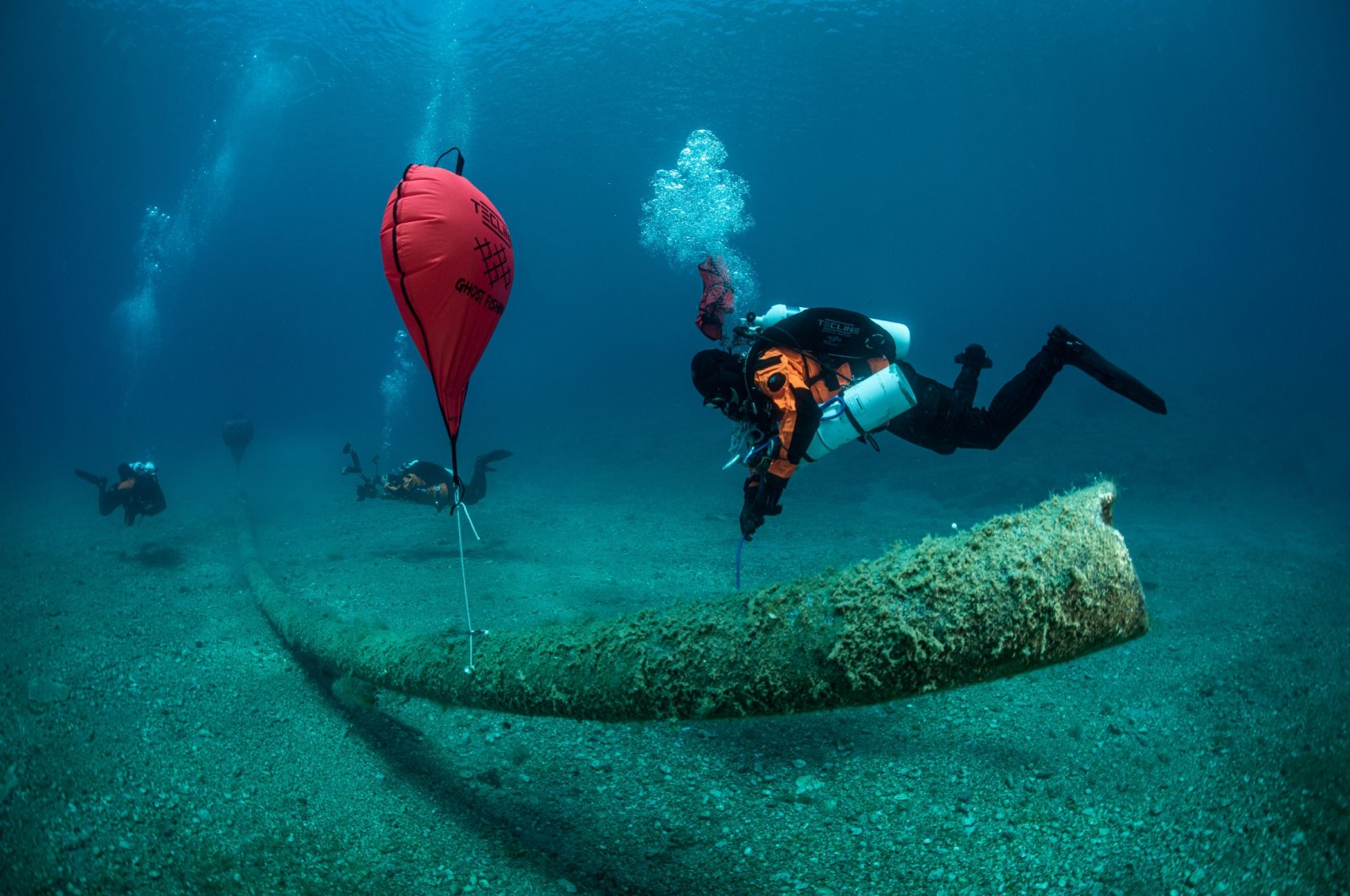 A diver inflates a lifting bag attached to the remains of a fish farm on the seabed, near the island of Ithaca, Greece, June 10, 2021. (Ghost Diving via Reuters)
by Reuters Jul 05, 2021 8:04 pm
RECOMMENDED

Marine life is one of the habitats in the world that is most affected by human-caused pollution as damage from waste and garbage dumped into the waters destroy the environment of sea animals,' even their oxygen. Divers in a polluted lagoon in western Greece recently highlighted this issue as they reported a rare sighting of hundreds of endangered seahorses that could become extinct if pollution is not cleaned up.

"We see hundreds here and if they remain we have hope," said diver Vasilis Mentogiannis, an expert in underwater surveys who has led efforts to protect the seahorses. "I don't think there is a similar situation to this anywhere else in Greece."

A protected species threatened by overfishing and pollution, seahorses need an environment full of organisms to feed on and plant life to hide.

Older fishermen say the Aitoliko lagoon in the northern Patras Gulf used to contain thousands of seahorses but their numbers have plummeted in recent years and local divers were amazed when they found a group of the creatures.

"It was the first time I had spotted seahorses and they were in a place I least expected," said local diver Labros Charelos.

Aitoliko, which reaches depths of up to 30 meters (98 feet), is linked by narrow channels to a shallow lagoon open to the sea. Over recent years, leaks from damaged irrigation canals as well as factory waste and fertilizers have cut off oxygen and polluted the lagoon, which on windy days gives off a "rotten egg" smell from hydrogen sulfide produced by its oxygen-depleted waters.

"Near the surface it is viable, it's the deeper depths that are a problem," said University of Patras professor George Katselis.

Spyros Kariofyllis has been fishing in Aitoliko for decades and says he has reached a point where he does not catch anything.

"When I throw my live bait in ... when it reaches five and a half meters it dies, and not only does it die but there is no living organism to eat it down there," he said.

Helped by 21 million euros ($24.92 million) of European Union funds, the Greek government is going ahead with a long-delayed study on repairing the damage but Mentogiannis said time was short for the seahorses.

For the moment, they have found a spot with oxygen and food, far from fishing areas but if hydrogen sulfide levels increase, it may be too late.

"We could lose them," he said.