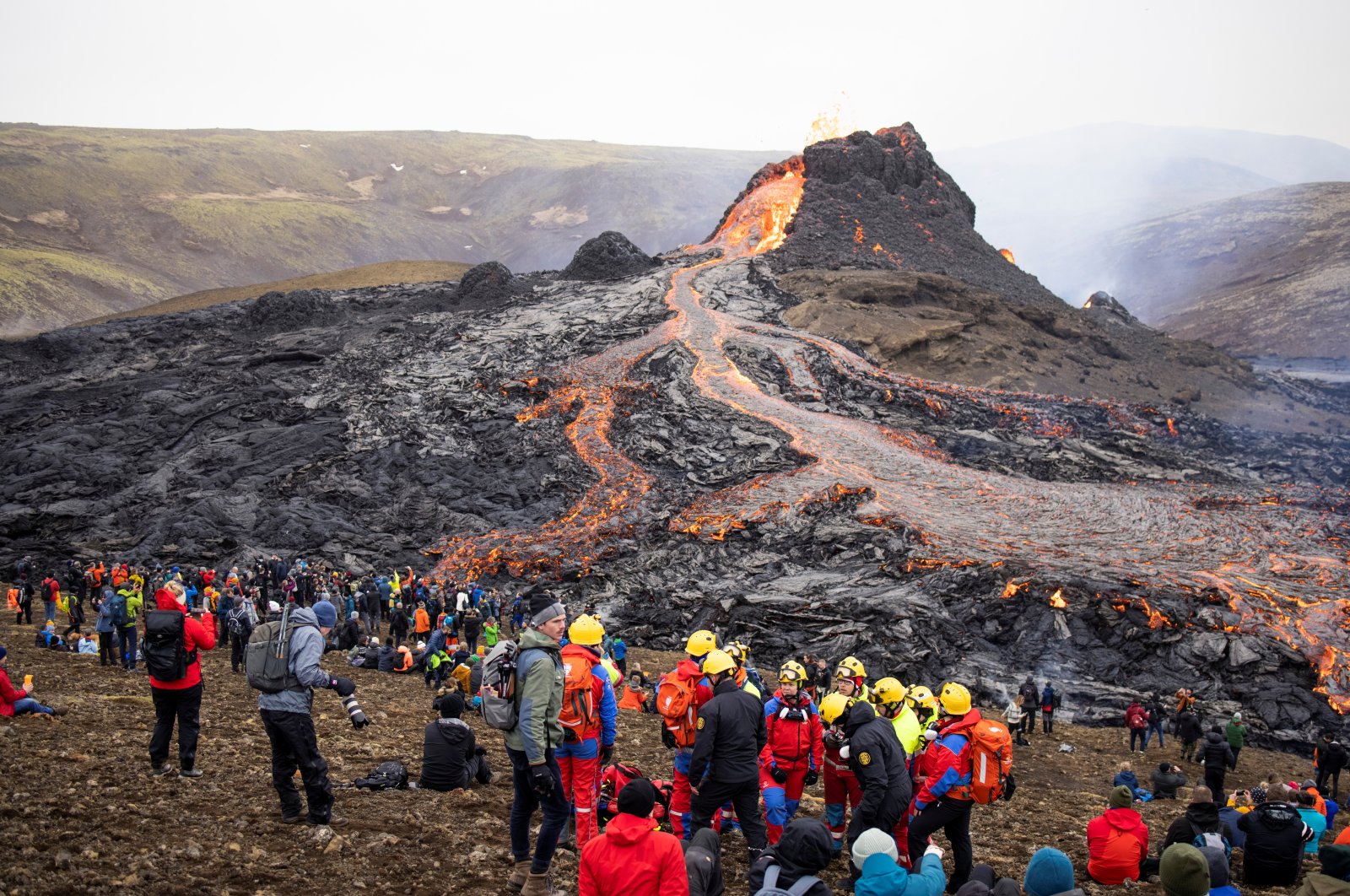 Thousands of curious onlookers have flocked to an erupting volcano in Iceland to marvel at the hypnotic display of glowing red lava, the bravest of them grilling hot dogs and marshmallows over the smoldering embers.

The eruption of a fissure near Mount Fagradalsfjall, which began late Friday, was the first in the same volcanic system in about 900 years.

The volcano is located only about 40 kilometers (25 miles) from the capital Reykjavik and can be reached after a 90-minute hike from the nearest road.

"It smells pretty bad. For me what was surprising was the colours of the orange: much, much deeper than what one would expect," he tells Agence France-Presse (AFP).

The incandescent lava bubbles and spurts from a small cone in the Geldingadalur valley, piling up in the basin and slowly turning a thick black as it cools.

Some 300,000 cubic meters (10.5 million cubic feet) of lava have poured out of the ground so far, according to experts, although the eruption is considered relatively small and controlled.

"For me it's the heat that really surprised me. When we approached the lava flowing on the ground, the temperature rose by 10-15 degrees and our faces flushed," says Emilie Saint-Mleux, a French exchange student in Iceland who came with two friends.

"It reminds you a little of a barbecue in summer," jokes her friend Lucille Fernemont.

Access to the site was blocked in the first hours after the eruption. Authorities then lifted the roadblocks but discouraged visits, but by Saturday afternoon visitors were allowed – under strict guidelines.

"We are just here to look after the people and see that everything is okay. And just watch that the people are not going too close to the lava and asking them step back," explains Atli Gunnarsson, a 45-year-old police officer, donning a yellow hardhat with a gas mask in hand.

Rescue teams also had to help dozens of freezing and exhausted people find their way back to the road on Sunday in the dark as weather conditions deteriorated.

A small recurring beep can be heard around the emergency crews. They're carrying devices that measure gas pollution, especially sulfur dioxide, which can pose a danger to health and even be fatal.

This is the first volcanic eruption on the Reykjanes peninsula in more than 800 years, and it has been more than 900 years since the Krysuvik volcanic system, to which Fagradalsfjall belongs, has erupted.

While eruptions are common in Iceland, with one taking place about every five years on average, they usually occur far from populated zones, in inaccessible areas. Others are too dangerous to allow public access.

This time, the curious can inspect the lava up close after a 6-kilometer (4-mile) hike from a road near the fishing port of Grindavik, the closest populated town with 3,500 inhabitants, not far from the famed tourist destination, the Blue Lagoon geothermal spa.

By Sunday, the throngs of hikers trodding across the volcanic moss had already left a visible trail to the Geldingadalur valley.

Others chose to break their piggy banks for a spot in the many helicopters flying over the volcano at the weekend.

While the number of tourists in Iceland has plunged because of the pandemic – tourism usually accounts for more than 8% of the economy – the island is trying to kickstart the industry.

It recently opened its doors to any international travelers who can prove they have either been fully vaccinated against COVID-19 or recovered from the illness.

It remains to be seen however if Iceland will be able to capitalize on the volcano.

According to experts, the eruption could die out quickly, possibly within a few days.