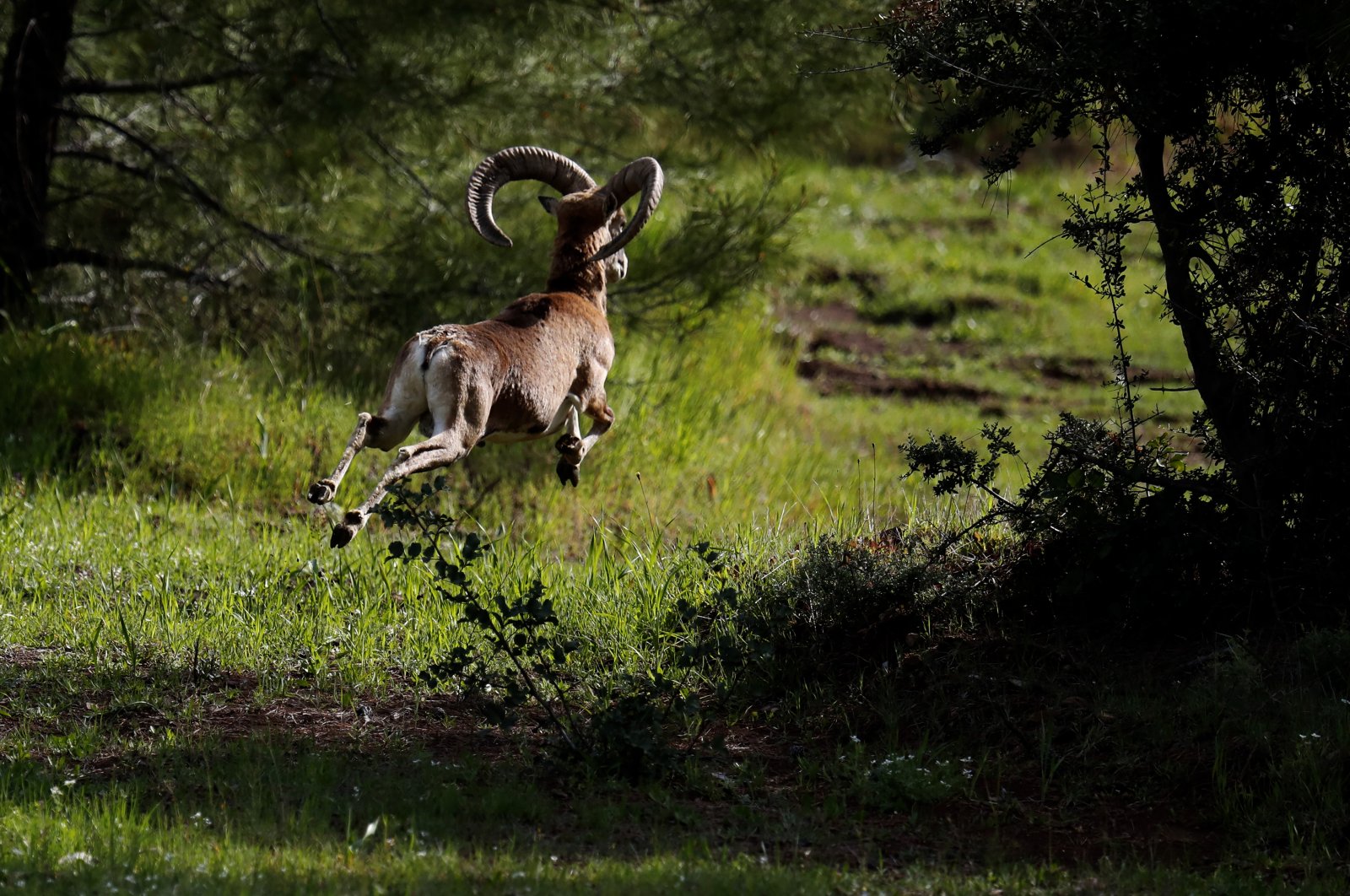 An endangered Mouflon sheep runs in the forest near the abandoned village of Varisia, inside the U.N.-controlled buffer zone that divides the Greek-controlled south and the Turkish-controlled north, on the island of Cyprus, March 26, 2021. (AP Photo)
by ASSOCIATED PRESS Apr 15, 2021 12:14 pm
RECOMMENDED

The island of Cyprus has been divided for over five decades, with the U.N.-patrolled Green Line forming a solid obstacle to prevent further clashes. However, this abandoned stretch of land separating the two sides of the conflict serves as a wildlife refuge for many species, providing a point of unification at least in the name of science and environmental protection.

There’s something regal in the sprightly step and curious gaze of the bighorn sheep that roam the hills near Varisia, an abandoned village inside the buffer zone. The endangered Mouflon sheep endemic to the Eastern Mediterranean island nation is one of many rare plant and animal species that have flourished in this no man’s land, which stretches for 120 miles (180 kilometers) and divides the island's breakaway north from its internationally recognized south.

Devoid of human habitation since a 1974 war that spawned the country’s ethnic cleave, the buffer zone has become an unofficial wildlife reserve. Its residents include the threatened Egyptian fruit bat, the bee orchid and the Eurasian thick-knee, a dwindling species of shorebird also known as a stone-curlew. All have multiplied largely unperturbed.

This unlikely refuge has been embraced by two environmental scientists, one Greek Cypriot and one Turkish Cypriot, as an open-air laboratory where complex politics and physical divisions can be put aside to focus on the overriding concern of protecting the parched country’s fragile ecosystem.

Greek Cypriot Iris Charalambidou and Turkish Cypriot Salih Gucel, both biologists, headed a pioneering survey in 2007 that explored the thriving flora and fauna inside the buffer zone.

Among the survey’s findings were that some areas in the no man’s land were important for the birds that use Cyprus as a stopover during spring and autumn migration, like buzzards, ospreys and harriers, as well as the Northern lapwing whose numbers in Europe have been in decline. Another important finding was that of the Cyprus spiny mouse, a rare endemic species not frequently found elsewhere on the island.

The survey garnered international accolades and provided an impetus to a budding ecological consciousness-raising on the island. It also underscored the need for cooperation for the sake of what all Cypriots share – their environment.

Located on the island’s remote northwest, Varisia, located to the west of the Lefke district of the Turkish Republic of Northern Cyprus (TRNC), has offered the scientists a deeper understanding of nature’s dynamics in a formerly inhabited area. Abandoned in the wake of a 1974 Turkish military intervention prompted by a far-right Greek Cypriot coup aimed at union with Greece, the village’s empty crumbling homes stand as a silent witness to the conflict. But for Gucel, the area speaks volumes about how to "be more sensitive toward the environment and to have a common implementation plan and laws” to protect the entire island’s ecosystem.

The scientists’ efforts to engage experts from both sides of the political divide on environmental protection is an ongoing project. Earlier this year, Gucel became the co-head of the Environmental Committee, a body to promote island-wide idea sharing on environmental issues.

Charalambidou serves on the board of the Cyprus Environmental Stakeholder Forum – a group of scientists seeking "to tackle environmental issues in Cyprus as one united island.” She said the forum is talking with the U.N. peacekeeping force in Cyprus to create a communications campaign.

"In order to adequately protect and conserve the environment on such a small island, it is important to cooperate and manage the plant, animal and other species, as well as habitats and ecosystems, as a common resource,” said Charalambidou.

U.N. peacekeeping force spokesperson Aleem Siddique said there's been a groundswell of interest in environmental issues, especially among young people who come together online to share ideas on how to tackle environmental challenges.

"We see a lot of interest from people on both sides of the island to bridge the divide, work together, overcome the mistrust for the common good of building a more environmentally friendly Cyprus,” Siddique said.

If Greek Cypriot and Turkish Cypriot leaders overcome deep political differences and forge a peace accord reunifying the country, the buffer zone that makes up 3% of Cyprus’ total landmass will revert back to human use as people reclaim their property.

In that scenario, both Charalambidou and Gucel say any decisions about environmental protection within the buffer zone should be carefully thought out in full collaboration with local communities.

For instance, safeguarding fragile areas inside the buffer zone could be part of an overall plan to develop ecotourism and agrotourism, producing and marketing high-grade food products from the area.

"What is needed is vision and the passion to come up with sustainable solutions,” said Charalambidou.

Despite progress, there’s still a long way to go in raising environmental awareness among all Cypriots, the scientists say. Illegal dumping and poaching are still a problem within the buffer zone, and a bicommunal committee on the environment that was part of peace accord confidence measures remains dormant.

"While we should be proud that our island has a wealth of unique and important species ... instead we seem to be content to allow many species and populations to disappear quietly into oblivion,” said Charalambidou.