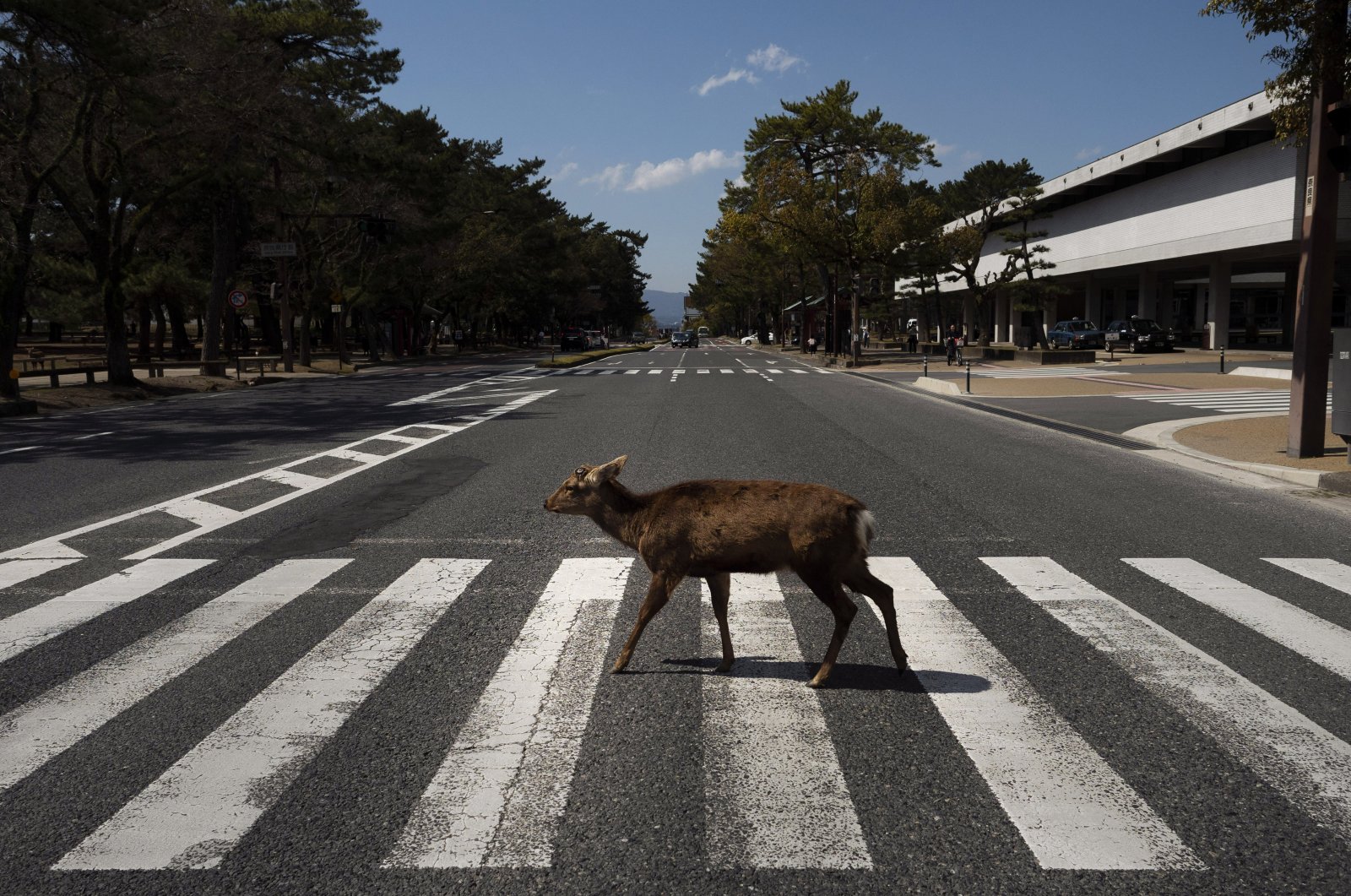 As humans retreat into their homes as more and more countries go under coronavirus lockdown, wild animals are slipping cover to explore the empty streets of some of our biggest cities.

Wild boar have descended from the hills around Barcelona while sika deer are nosing their way around the deserted metro stations of Nara, Japan.

Indian social media has gone wild about footage of a stag scampering through Dehradun, the capital of the northern state of Uttarakhand.

Gangs of wild turkeys have been strutting the streets of Oakland, California, while a puma turned up in the center of the Chilean capital Santiago, which is under curfew.

"This is the habitat they once had and that we've taken away from them," said Marcelo Giagnoni, the head of Chile's agricultural and livestock service that helped police capture the curious big cat.

While sightings of dolphins in Venice's canals turned out to be fanciful, they have been popping up in ports elsewhere in the Mediterranean as emboldened wildlife takes "free rein to wander our cities and towns," said Romain Julliard, head of research at the French Natural History Museum.

He told Agence France-Presse (AFP) that foxes were at the vanguard of the new urban explorers. "They change their behavior very quickly. When a place becomes quiet, they're straight in there."

Animals and birds that normally live in urban parks, like sparrows and pigeons, are also more likely to venture beyond their usual territories, Julliard said, "freeing a space for other animals."

While the dawn and dusk choruses have been bringing comfort to many quarantined city dwellers, the museum's acoustics specialist Jerome Sueur said that doesn't mean there are more urban birds than before.

It is more that with reduced traffic noise we can hear them better. Some, however, "stop singing when there is noise, so now they are letting themselves go."

"Animals are shaking off human noise pollution," Sueur said. And the timing could not have been better time as they embark on their mating season.

With the hunting season suspended in several European countries, this promises to be a spring and possibly a summer of love for the animal kingdom.

It is certainly great news for species like the common toad and the spotted salamander. The amorous amphibians are being spared from being "crushed crossing busy roads" in their haste to find a mate, said Jean-Noel Rieffel, of the French biodiversity office (OFB).

With few dog walkers to disturb them, baby fawns are also getting an idyllic start to life while birds like Mediterranean gulls who nest along the sandy banks of rivers are being left undisturbed.

In the Calanques National Park overlooking the Mediterranean near France's second city of Marseille, wildlife "is reclaiming its natural habitat with surprising speed," said the park's president, Didier Reault.

With walkers and boating banned, "the puffins who used to stay on the islets in the highest protected areas are not gathering on the sea," he said.

And it is the same for plants. Wild orchids – which are supposed to be protected – are often picked by walkers when they blossom in late April and May, said Rieffel. This year they will be spared that fate.

And in the cities and suburbs, unmowed lawns will be a source of "bounty for bees, bumblebees and butterflies," Julliard added.

But for him, the biggest change is the effect this is having on humans. "The most important phenomenon perhaps is our relationship with nature changing – with people locked up in their homes realizing how much they miss nature," he said.

British ornithologist David Lindo, who is known as the "Urban Birder," has been tweeting and livestreaming birds he spots from the roof of the building in Spain where he has been quarantined.

"The sky is a great arena, anything can fly past and, at the very least, it will give you peace. My message is simple: keep looking up," he told his new-found followers.

However, there are also downsides to the lockdown for nature.

Work to limit invasive species has been all but halted, cautioned Loic Obled of the OFB, as well as that to help endangered species.

And when the lockdown finally ends, Rieffel warned that "people will have a need of nature and there is a risk of too many visitors (to natural parks), which won't be good for the flora and fauna."

The birds which have nested in the yard of an abandoned school or factory will find themselves disturbed, he warned. Nature's respite from man may be rather short-lived.