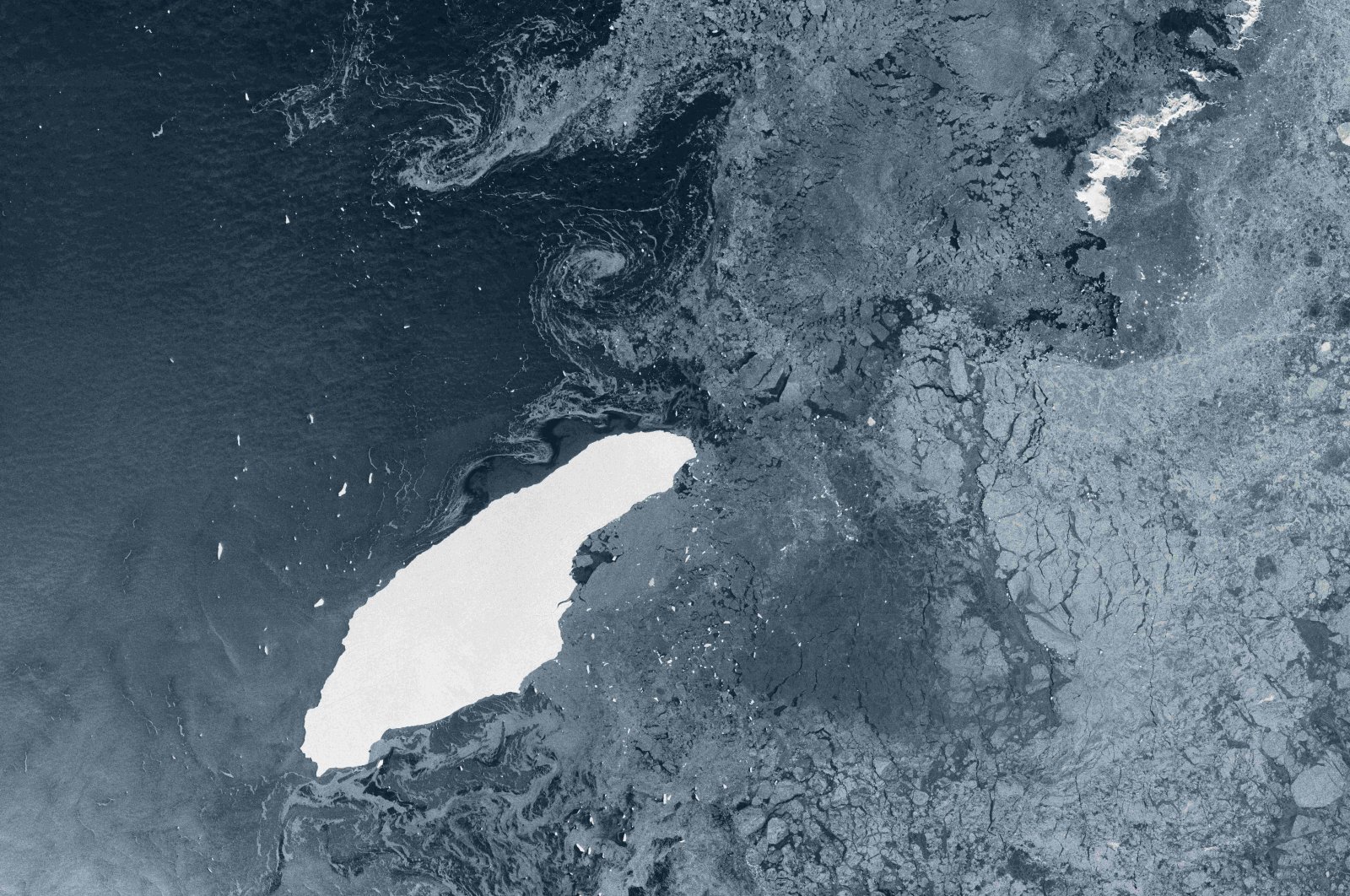 An image captured by the Copernicus Sentinel-1 radar mission on July 5, 2020, shows the parent berg, A-68A, which is about twice the size of Luxemburg and one of the largest icebergs on record. (Handout Photo by the European Space Agency / AFP)
by French Press Agency - AFP Nov 04, 2020 9:35 pm
RECOMMENDED

The world's biggest iceberg is set to smash into a remote South Atlantic island that is home to thousands of penguins and seals, and could impede their ability to gather food, scientists told Agence France-Presse (AFP) Wednesday.

Icebergs naturally break off from Antarctica into the ocean, but climate change has accelerated the process – in this case, with potentially devastating consequences for the abundant wildlife in the British Overseas Territory of South Georgia.

Shaped like a closed hand with a pointing finger, the iceberg known as A68a split off in 2017 from Larsen Ice Shelf on the West Antarctic Peninsula, which has warmed faster than any other part of Earth's southernmost continent.

At its current rate of travel, it will take the giant ice cube – which is several times the area of greater London – 20 to 30 days to run aground into the island's shallow waters.

A68a is 160 kilometers (93 miles) long and 48 kilometers across at its widest point, but the iceberg is less than 200 meters (656 feet) deep, which means it could park dangerously close to the island.

"We put the odds of collision at 50/50," Andrew Fleming from the British Antarctic Survey told AFP.

Many thousands of King penguins – a species with a bright splash of yellow on their heads – live on the island, alongside Macaroni, Chinstrap and Gentoo penguins.

Seals also populate South Georgia, as do wandering albatrosses, the largest bird species that can fly.

If the iceberg runs aground next to South Georgia, foraging routes could be blocked, hampering the ability of penguin parents to feed their young, and thus threatening the survival of seal pups and penguin chicks.

"Global numbers of penguins and seals would drop by a large margin," Geraint Tarling, also from the British Antarctic Survey, told AFP in an interview.

The incoming iceberg would also crush organisms and their seafloor ecosystem, which would need decades or centuries to recover.

Carbon stored by these organisms would be released into the ocean and atmosphere, adding to carbon emissions caused by human activity, the researchers said.

As A68a drifted with currents across the South Atlantic, the iceberg did a great job of distributing microscopic edibles for the ocean's tiniest creatures, said Tarling.

"Over hundreds of years, this iceberg has accumulated a lot of nutrients and dust, and they are starting to leach out and fertilize the oceans," he said.

Up to a kilometer thick, icebergs are the solid-ice extension of land-bound glaciers. They naturally break off from ice shelves as snow-laden glaciers push toward the sea.

But global warming has increased the frequency of this process, known as calving.

"The amount of ice going from the center of the Antarctic continent out toward the edges is increasing in speed," Tarling said.

Hydrofracturing – when water seeps into cracks at the surface, splitting the ice farther down – was almost certainly the main culprit in each case.