A story of passion, positivity and fashion: Tuğba Atasoy on doing what she loves 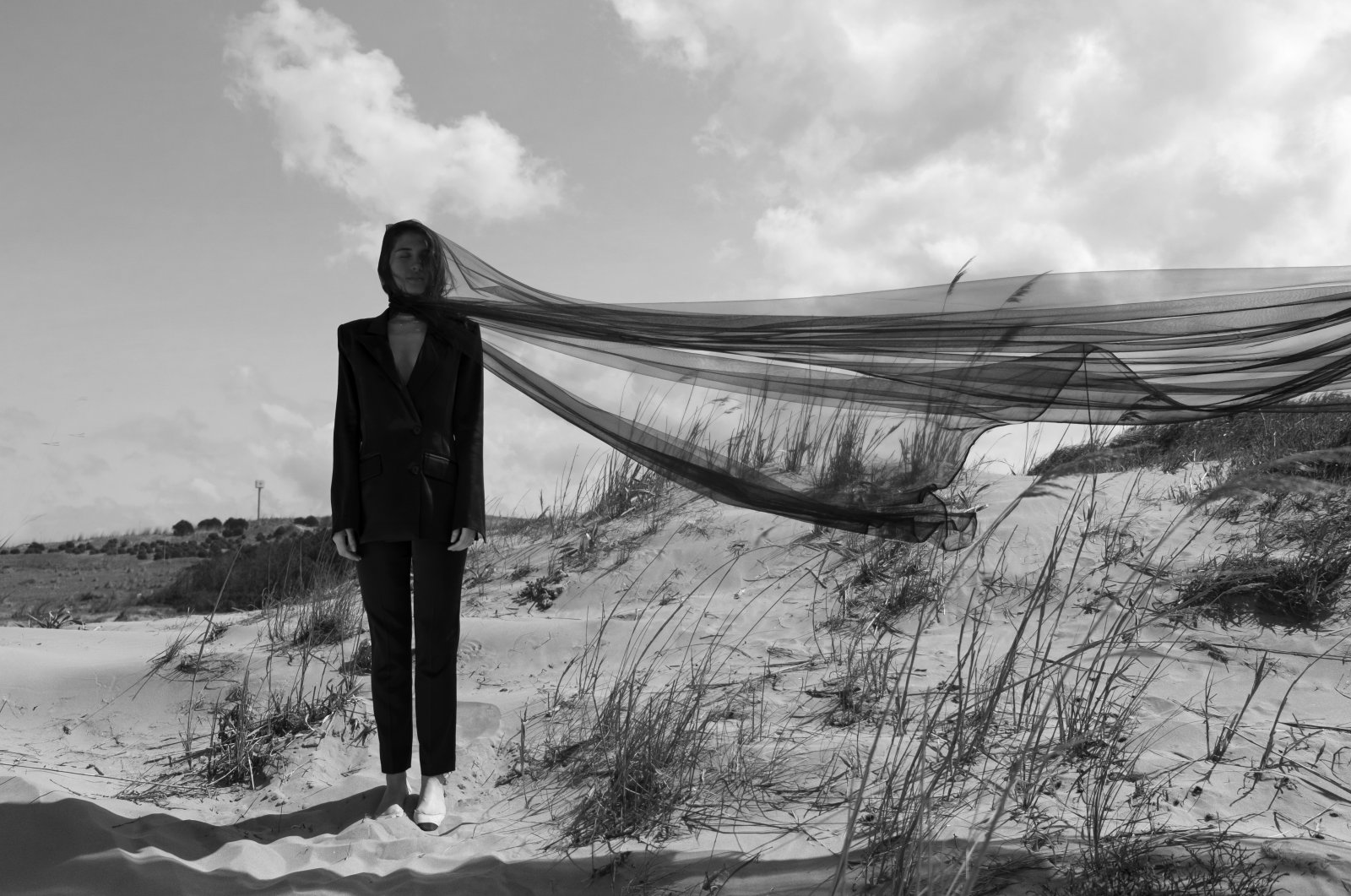 Competition in the fashion industry is fierce, whether you are in couture or ready-to-wear. Pouring your unfiltered ideas and love into your work is the only way to set yourself apart, one Turkish designer says

It was another miserable Monday morning when I sat across from Tuğba Atasoy, a Turkish fashion designer who has been in the business for more than a decade. Even through the camera, I could feel the warmth of her smile – to be completely frank, not what I had expected from someone doing couture for over 10 years.

It was apparent from the get-go that she is a poised woman who knows how to make an impression and knows exactly what she wants. She was wearing a perfectly tailored black pantsuit, not a seam out of place. Her blazer meant serious business but the wrap style and leather belt cinching in at her waist signaled to me that she is not a boring classicist; she likes to add her own touch to everything she does. Ahh, and the red nails – she is confident, without a doubt.

Her sunset-colored bronzy eye makeup made her blue eyes pop, the nude pink lipstick complimenting her skin tone perfectly. Blonde curls cascaded down her shoulder, her hair parted in a purposefully messy side part. This woman knows how to carry herself and she is not a slave to the trends.

Atasoy is the type of woman who lights up a room with her presence but also instills trust with her knowledgeable and sophisticated presence. Her nimble fingers cup her coffee and dance with every word that comes out of her mouth; they offer a mere peek into what she can create with a designer’s best instrument – her hands.

She is a fast talker, barely breathing between sentences. She keeps her listener on edge but is easy to follow. It’s easy to tell that she creates art – her brain was imagining something new every second we spoke, her words struggling to keep up with the pace.

Her foray into the world of fashion and design began at college. I learned we went to the same university, only a few years apart. Although she started her education by dipping her toes into the art world, she quickly realized that fashion design is where she was meant to be. A spot opened up in the class in the coming term, and before she knew it, she was on course to graduate at the top of her class.

Some people have a decisive turning point in their lives about which they can say, “that’s when I knew I had to do this.” For Atasoy, there was never such a moment.

"It’s what I’ve always ever wanted to do. There was no big beginning; it’s what I always loved doing,” she said, her eyes lighting up like it was Christmas.

Perhaps her parents already knew this is what she’d become. After all, she was designing clothes for her Barbie dolls and sewing on her pink sewing machine when she was just a child. Coming from a family of shipowners, her path of choice was certainly not expected, but even her parents could see the spark in her eye whenever someone remotely mentioned fashion.

"I come from a Black Sea family; every single one of us can sew. So I don't think they were that surprised," she said.

If you fall, you get up – again and again

The early 2010s was the era of fashion consultancy. Celebrity wardrobe stylists were booming; Celebrity Style Stories were running on TV.

Atasoy, too, dedicated her first years to this profession. As influential and challenging as it is working on the sets of famed Turkish TV series "Adını Feriha Koydum" ("I named her Feriha") and working with Turkish celebrities such as Gülben Ergen, Atasoy decided it was time to take a bold and brave step in her career to build her own brand from scratch.

At the tender age of 23, Atasoy was clueless about business matters but learned the hard way, by making mistakes.

"I fell but I got up, again and again. I could sew an evening ballgown by myself and do a whole collection from scratch, but money and budgeting took some time getting used to," she said.

When you are in the fashion business, you’ve got to pick your battles: Do you want to be loved by the masses or do you want to stick to your vision even if it means you'll be worn by the few? Atasoy said the reason she went with couture for her first brand, instead of going the more affordable and ready-to-wear route, was to preserve her idealistic streak and artistic aesthetic. The reality of possibly trying to compete with multimillion-dollar retailers such as Zara was also another factor.

"It would not have been feasible from a business perspective," she added.

Hence, Atasoy said, she knew she had to hone in on a more niche audience and focus on quality over quantity.

“Designs, shapes and fit would be my focus and using quality fabrics, instead of trying to please more people,” she said. “I had to start off small and later expand.” And that's how her second brand Eon came about. If Tuğba Atasoy is Dior, then Eon is J'Adior.

One would think the switch from couture to ready-to-wear would be easy – after all, you have a set of patterns and templates to stick to, plus years and years of experience with intricate designs and custom-made outfits means you’ve practically mastered the art.

But Atasoy jokes this transition was not as smooth as she'd like to admit.

"I did my first collection and realized that all size 36s were different; it was embarrassingly funny. I was used to tailoring each piece to my client so that it fit like a glove. I did learn, eventually," she said awkwardly, aware of the irony that she got stuck on the comparatively easier task.

Some designers have clear inspirations and muses they channel for their designs. For Atasoy, there has not been one, in the traditional sense anyway.

"I design for the Atasoy woman, the way I would like all women to be nowadays; smart, strong, sophisticated, aware, attention-grabbing, tastefully plain," she said with fervor.

"Each season I sit down and think, where will this woman go to now? Where will she eat? How does she want to feel?" That's Atasoy's inspiration: a confident woman.

But after 10 years in the business, is it not tiring to produce new ideas and be creative every day?

Atasoy said creativity is like a muscle: The more you use it, the better and stronger it gets.

"Whenever I feel stuck, I connect with nature, appreciate the green, go and see some art. I follow the art scene closely and read books. Travel is always a great mental block dissolved," she said.

"My imagination is much more colorful than the clothes I design," she said jokingly. Even when she was stuck between four walls during the lockdown, Atasoy said she found ways to keep herself busy and creative.

"I dyed old clothes, used them as my canvases. I read books and looked to nature for inspiration," she recounted.

Then a juicy question popped into my mind: Who would you really like to dress?

"I like (Turkish actress) Ece Sukan, I like the way she dresses. And I absolutely love Hailey Bieber's style. She is that kind of effortlessly cool. I dress in more classic styles but that style of cool is what I love," she responded.

Speaking of style icons, I asked her what the most challenging or rewarding outfit she had ever designed was.

Without skipping a beat, she said it was a transparent dress onto which she handpainted a beautiful octopus to provide perfect, strategic coverage.

"She was actually a friend of mine, and a very bold one at that. She gave me free rein to do whatever I wanted and I let my creativity roam free. The dress itself did not get international attention but it remains one of the creations I am most proud of and one that left me feeling completely satisfied," said Atasoy.

Fashion is often reduced to being a mostly feminine pursuit or a temporary pastime and even trivialized as popular culture. Little do people know, the way someone dresses gives so many clues about one's identity, aspirations and purpose. In the realm of politics, you can see how the outfit choice of an official can stir a diplomatic crisis or how colors and cuts can psychologically crush a political rival.

The fashion industry on its own is also an undeniable economic superpower, worth over $2.5 trillion, more than the combined gross domestic product (GDP) of the world's 126 poorest countries.

Atasoy too believes in the power of fashion.

"If you saw the degree of confidence the women I dress have after I get them ready for an event or witness the change in how they carry themselves after a fitting, you’d beg to differ," she said. I am sure many of us can resonate with this sentence – in the right power suit, you feel as if you can rule the world.

Hours and hours of work, blood, sweat and tears also go into designing articles of clothing, especially when it is runway season. With a virus running loose this year, things have run a different course. Atasoy and her atelier too had to go into lockdown at the beginning of the pandemic.

"We had to shut down for about a month," she said.

"But we actually had to start working again soon because we had to finish an order. Of course, we didn't work weekends and had to reduce our hours. We worked in well-ventilated areas with masks and were rigorous with testing. I would not have called everyone back to work if they hadn't proposed it themselves. We finished with zero cases and everyone was thankful for not having to deal with economic hardship. In a way, we showed that it was possible to continue business as usual by making a few adjustments," Atasoy said.