Is 10 years too long for a garment to live in your wardrobe? 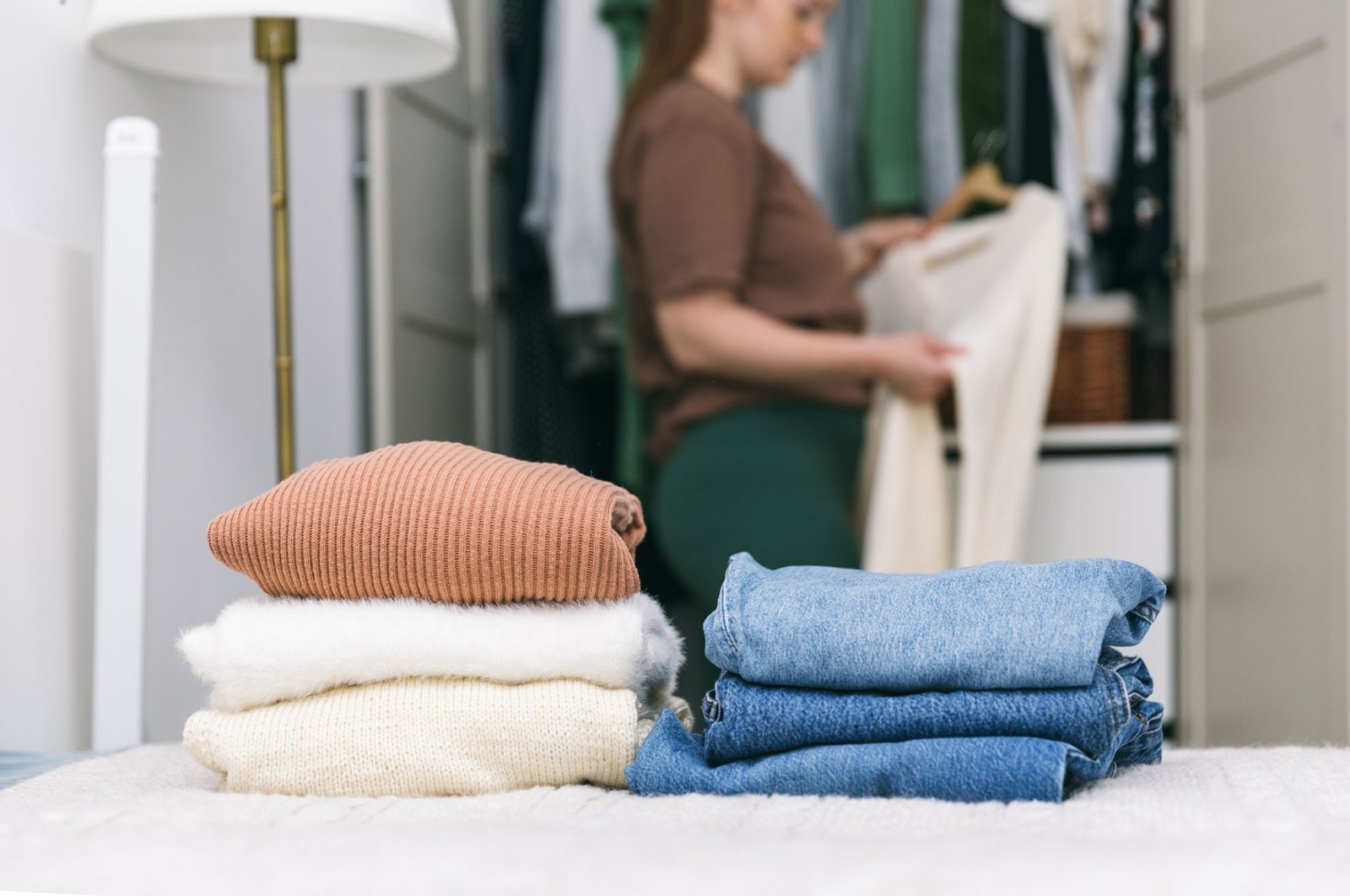 Having regular closet clearouts is good to assess which items are actually living up to their true cost per wear. (Shutterstock Photo)
by Yasemin Nicola Sakay Mar 10, 2021 3:15 pm

If you cast trends aside, is a decade really that long of a time to be wearing one item of clothing over and again? Considering the actual lifespan of fabric in a landfill, it might not be as long as you think

Everything changed when the Industrial Revolution began in Britain in 1750 and rapidly spread to the rest of the world. It spurred a transformation in the way people worked, the way the economy operated and how we made and moved things.

By the mid-19th century, the business of fashion had become a force to be reckoned with thanks to the mass production of textiles. Coupled with the invention of cheaper, wrinkle-resistant, long-lasting synthetic materials such as polyester, acrylics and nylon, so began the brainwashing of fast consumption culture.

Those of us unacquainted with marketing tactics or the wider impacts of such fabrics or fashion, in general, soon found ourselves knee-deep in the world of trends, sucked further into this wear-once-and-throw-away culture with empty words such as "seasons," "trendsetting" and "fashionable."

Soon followed the deadly suffocating mentality that each garment had its "best before" date, a maximum number of days or times a single item of clothing could be worn until it was out of fashion or "so last season." For some this was a year, for some it was a season of three months, and for some, it was just one wear.

That was fast fashion in its "glory" days.

But how long can a single item of clothing actually last, in theory, and in practice?

This question popped into my mind when I was talking to Göknil Bigan, the founder of sustainable fashion brand Giyi, and asked her what the oldest item of clothing in her wardrobe was.

Bigan said it was over 20 years old, and for the items passed down from her mother and grandmother, this figure could easily be 70.

So after we hung up, I opened up my closet to have a little analysis of my own. Being back in my childhood home, of course, I’m bound to find a few older items due to my inner hoarder, but which ones do I actually still wear? That would be the real question.

I came with only a small suitcase, partly because I didn't want to carry the extra weight and partly because I knew I'd be going nowhere. I had also naively thought the COVID-19 pandemic would be under control in a few months, and one year on, I can see how off my judgment was.

I already had a very limited number of options to choose from, but I would make do with what I had and only buy what is absolutely essential to accommodate the changing weather.

I sat down and grabbed a white strappy bustier, an item gifted to me over 10 years ago, which could have practically been stitched onto me the whole summer; I practically lived in it. And now thanks to Netflix hit Bridgerton, they are all back in fashion.

An angsty teen at the time when I received this cotton top, I had banished this to the back of my closet. Fast forward a few years, I thought I’d wear it around the house, at least, as I was not sure if it was "me." It saw daylight only a few times, until last year.

When the mercury soared past 40 degrees Celsius, the items I had brought with me would only add to my misery and I needed something breezy. That's when I rediscovered it.

Pairing it with a pair of light wash denim shorts and a light blue linen shirt, it was my perfect summer ensemble.

Not only was it a perfect fit but it was also breezy, summery and instilled a sense of nostalgia in me. It had survived for over a decade in my wardrobe and dozens of washes.

But, of course, there was also the fact that I didn’t wear this every single year, which made it hard for me to assess the true endurance and quality of it. For all I know, it might fall apart next year if I continue to wear it at the same rate.

For a more apt comparison, I dug out a simple black cardigan with small buttons. It had been my mum's before I stole it at 13. I recall seeing her in it when I was in primary school, so by that math, that cardi is closely approaching two decades. I've worn that piece every single year, at least once. Consequently, it's quite possible for a garment to last well over a decade. But that's the practical side of things. What about in theory?

What is a garment's real expiration date?

When talking about the true, calculated lifespan of a manufactured item of clothing, there is one metric we need to talk about: decomposition.

When it comes to biodegradability, natural fabrics have synthetic fabrics beat. The problem here stems from the fact that over 72% of the clothes we wear nowadays are made of synthetic fibers, i.e. non-biodegradable and made of plastic. The catastrophic consequence of this reality is that when these clothes eventually end up in a landfill, they may stay intact for 200 years.

As a rule, natural fibers are readily biodegradable while synthetics, which are derived from petroleum, are not, hence the astronomical difference in decomposition rates. Here's a breakdown:

As cotton is primarily composed of the organic compound cellulose, its soft fibers decompose naturally and relatively fast, much like food and plants. If an item is made of 100% cotton, it can decompose in nature in as little as a week. Conventional cotton which uses vast amounts of chemical dyes and pesticides and more water compared with organic cotton may take slightly longer, depending on the blend of fibers used.

Linen is a breathable fabric made from the stems of flax plants, and despite being up to three times stronger than cotton, it decomposes as quickly, if not sooner. When undyed and not combined with other types of fibers, an item made of linen could biodegrade in two weeks underground.

Denim is made of cotton, but you can easily see how hard it is when you compare it to a soft cotton T-shirt. Jeans contain stretch fibers such as elastane, which gives them the stretch and softness we crave, but this convenience comes at the expense of much longer decomposition times. Appliques will take longer and the hardware won't even decompose.

Made from the cocoons of silkworms, this luxurious fabric is very biodegradable, and in vivo studies have shown that it can breakdown in two years or up to four years, depending on the composition of the fibers used in the garment.

This thick and fuzzy fabric takes longer than its other natural counterparts but still takes less than a quarter of the time needed for synthetic to decompose. A wool sweater on average needs one to five years to biodegrade, but the fact that a good quality sweater can last a lifetime, makes it worth buying.

Nylon is a thermoplastic silky material derived from petrochemicals, and most often used to make tights (hosiery), outdoor apparel, swimwear and gym wear. Though favored for its durability and weather-resistant properties, this synthetic fabric is considered non-biodegradable, taking decades to decompose in soil.

Whether in the form of elastic bands, shoe soles or even handbags, rubber is championed for its water resistance, elasticity and impermeability in the fashion industry. Although rubber does have natural varieties such as those derived from rubber trees, most of the rubber used in the industry is manmade such as vulcanized rubber. However, this kind takes between 50 to 80 years to decompose.

Polyester is a type of polymer that was created in the 20th century from the chemical reaction between petroleum, air and water. Used in items as small as socks to longline coats, polyester is the most widely used plastic in the industry. It can take hundreds of years for it to naturally decompose in landfills, and because it sheds microplastics every time it is washed, polyester is inarguably one of the most harmful fabrics out there.

The most non-biodegradable and least sustainable of all, however, is spandex – the body-molding and slimming fabric used in shapewear, undergarments and workout gear. It is a highly processed and super elastic fabric made of a synthetic polymer called polyurethane, aka plastic. Also called lycra, this fabric is thought to take 500-plus years to decompose.

According to the data compiled by the U.N. in 2018, fashion accounts for 10% of human-caused greenhouse gas emissions and produces 20% of the world's wastewater. The longer it takes for a material to decompose, the more green gas it will emit.

Now, let's look at the financial side of things.

According to the Ellen MacArthur Foundation, the average time a piece of clothing is worn by a human has decreased by over a third between 2000 and 2015, while production has doubled within the same years. The British charity Barnado's found in 2015 that the average human wears a piece seven times before it is discarded. To add on top of that, Rent the Runway reported that in 2018, American shoppers bought about 68 new articles of clothing a year.

This uptick in buying could greatly be attributed to consumerist culture and the oversaturation of the market; however, consumers have also willingly or unwillingly worn the same item fewer times due to problems with longevity and quality. That has been one of the biggest problems with the clothes of today, especially those mass-produced by fast-fashion chains. Even if you buy an item with the intention of using it for years to come, the reality is that it loses its shape, fades or pills after a couple of washes.

What happens with these clothes is that they get thrown away, instead of being repurposed and recycled. In 2018, the Environmental Protection Agency reported that 17 million tons of textile waste ended up in landfills. Similarly, the Ellen MacArthur Foundation found that globally, every second the equivalent of one garbage truck of textiles ends up in a landfill or is burned. These support previously shocking revelations such as the one revealed in the 2015 movie "The True Cost" in that the average American discarded 37 kilograms of clothing every year. This translates to hundreds of dollars going to waste, not to mention the greater environmental impact.

So, the next time you debate whether wearing the same item over and over again for three months or 10 years is too long, know that it’s been created to last, possibly, hundreds of years.