Kill Your Idols: Why being rebellious doesn't mean turning your back on tradition 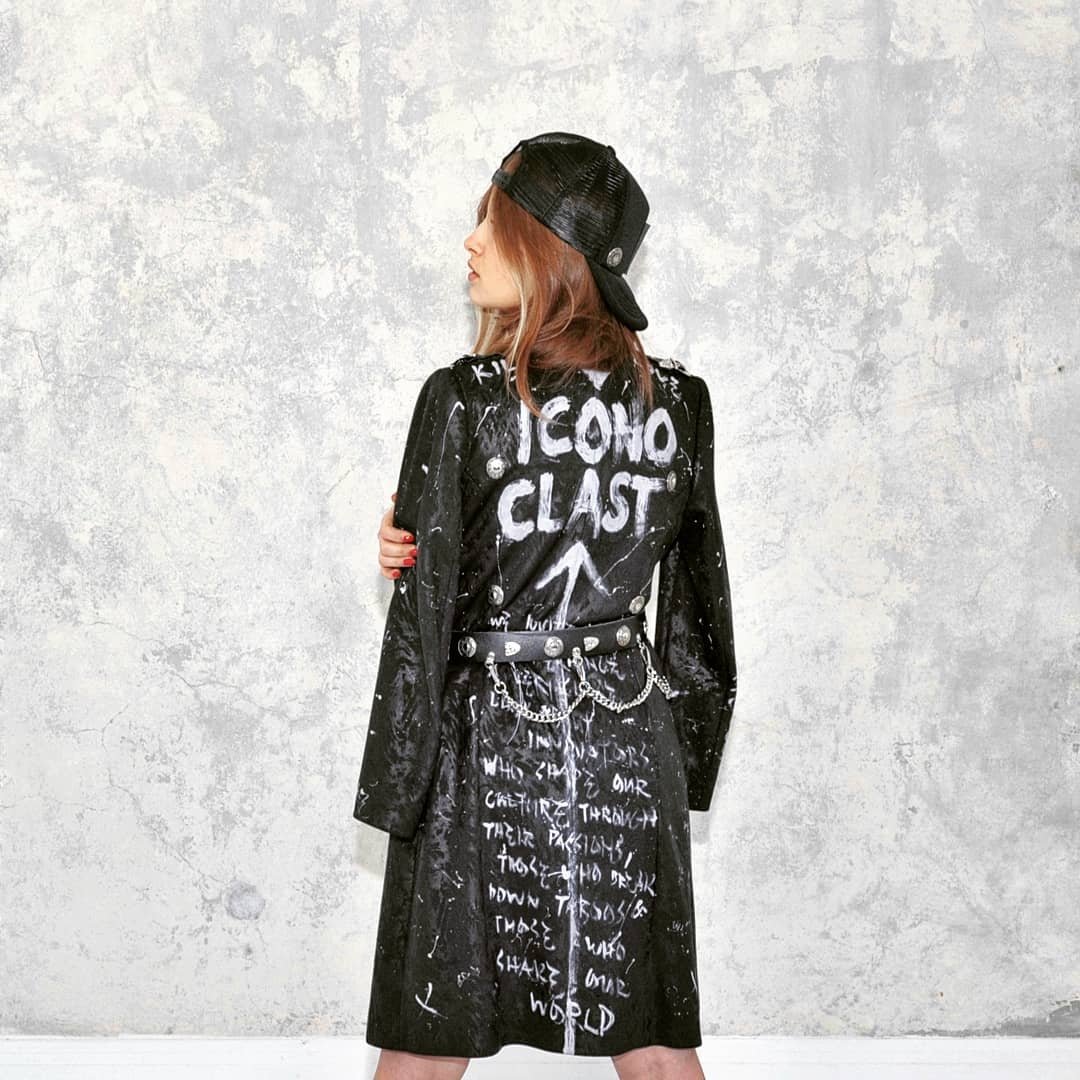 The KillYourIdols® brand was established in 2014, influenced by art, music, and fashion. (Photo courtesy of Sedat Yazıcı/Kill Your Idols)
by Yasemin Nicola Sakay Dec 02, 2020 3:15 pm

Can you truly use clothes to rebel and spark new conversations? There are few things in life as strong as fashion for doing so, and rebellion doesn’t necessarily mean going against tradition, as this Turkish designer shows

In the era of a world-shaking pandemic, rebellion takes on different meanings. Modern societies have failed to compromise on their "normal" routines, and as a result, a global health threat has taken the reigns to dictate the fate of human lives. With science-denying establishing itself as the new norm in recent years, as demonstrated once again by the mass mask-adverse behavior in 2020, obeying rules is more of a rebellious stance than breaking them.

Sedat Yazıcı and his brand Kill Your Idols are true rebels in that sense.

"For eight or nine months now, we've been avoiding crowds, cooped up in our offices away from people, wearing masks at all times – unlike some," he said from Arnavutköy in Istanbul. Wearing a gray snapback, a black hoodie and a leather jacket of his own creation decorated with slogans, it's obvious he's not a conformist.

When one looks at the brand philosophy, its influencers and imagery for products, it's easy to see that they are not meant to fit in.

That’s part of the reason why Yazıcı says he stuck to staying small and boutique, and created a niche brand catering to a specific audience.

"This direction was the right way for us going forward. It proved more crucial, especially since the pandemic has shown the world how vicious the world of fashion really is, how much a game it is, how much fast fashion pollutes the world," he said. Yazıcı said they’ve tried to play their part toward a more sustainable future by making use of every piece of fabric and material when creating products.

"Even the smallest piece of leather becomes a key chain, and nothing goes to waste, we make sure," he added.

Yazıcı's story, meanwhile, is as varied as my moods.

As for his training, there is almost no art form or discipline he has not tried his hand at: drawing, fashion, cinema, Turkish fine arts, Islamic calligraphy – a few years with one and a few months immersed in another.

Having studied at prestigious Turkish universities such as Marmara University and Mimar Sinan Fine Arts University, aka the Juilliard of Turkey, for about a decade, he certainly has a strong theoretical background, which explains his yearlong meticulous search for the best craftspeople out there. He also learned on the job through apprenticeships and assistantships, working alongside big names such as Özlem Süer. And five years ago, after a stint in television, he decided to dedicate all his time to his brand.

Ever since, he's been working with about 15 artisans and masters who do everything by hand. The result is all things leather, with metal accents and signature free-hand touches. It is a combination of his free-spirited nature and brave designs, and the wisdom of a strictly traditional, methodological artisanry passed on from master to apprentice.

In the throes of creating a brand

Establishing your brand is a lengthy, tumultuous process.

After picking your target audience and researching your competitors, you need to focus on creating a story through your brand – What's your focus? How did it all begin? What's your personality? Then come the slogan and your philosophy, which shapes the look, colors and feel of your designs. And finally, with the logo, you've brought it to life.

But the creative side of things is nothing compared to keeping the business afloat and drawing in investors. To be able to continue doing what you do, you need money – it's a business after all.

"You need big investments because we're talking about dozens of new products and inventory, supplying (new materials)," said Yazıcı. When it comes to choosing a market to sell in, these demands will influence your decisions, more than you think.

"As the fashion industry in Turkey works on a consignment basis, we had to turn abroad as we wanted to focus on making products to order," he said.

It's not a bed of roses in Europe either, though.

"Making it abroad has its own challenges. They want to trial your brand and its products before they commit to buying. They don't pay you upfront for your products, for example. So, you have to send in 100 or so products and pay for them out of pocket," said Yazıcı.

That's where budgets and the fashion economy steps in. When you don't have the funds, you are forced to take a step back.

"We had to take a break because the budgets were out of our reach and we could not keep up with the number of pieces. Our products are handmade and we can only finish five to six products in a month. Our pricing policy reflects that. We also pay our artisans in cash which makes things even more difficult," he added.

A rebel is born

The birth of Kill Your Idols comes from a place of freedom, to be free from the chains of taboos, a desire to be independent, and as a revolt against the conventional – passionate innovators and problem-solvers creating art in the form of fashion.

"I was already very involved in cinema and music at the time; I was into Rock 'n Roll. So, I decided to create a designer jacket collection inspired by these themes," said Yazıcı of his first creations.

The name of the brand and its identity can be traced back to a single iconic look: when legendary Guns N' Roses frontman Axl Rose wore his "Kill Your Idols" Jesus T-shirt at Wembley Stadium in 1992.

"This our main concept: We deal with pop culture; our themes are centered around music, art and cinema. We get inspired by song lyrics, local or foreign musicians, directors. Whatever we are into at that moment could become the new muse for our designs," he said, though he adds: Inspiration doesn't strike often.

This philosophy is perhaps most apparent in their collection of iconoclastic designs and idol jackets, inspired by icons such as Grace Kelly, Michael Jackson and Barış Manço. They are classic but with an edgy twist.

"As a brand, it's important to have your own distinctive style and details that make you 'you.' People should be able to look at your design and say 'Ahh, this is Kill Your Idols.' You should not be doing everything that is on trend, you need to have boundaries," said Yazıcı.

Some brands have one product that puts them on the fashion map. For French label Isabel Marant, it was wedge sneakers. For Kill Your Idols, it was western cowboy boots. This has especially rung true for their popularity in Turkey.

“It’s the boots, of course,” said Yazıcı. It's his favorite item of clothing, unsurprisingly.

"It can be masculine or feminine, it's a strong piece. It even affects the way you walk or talk according to its heel height or shape and mold," he said.

The irony of iconoclasm

“On one hand, we are telling people to kill their idols and stop putting them on a pedestal but on the other, we’re also using icons to make a statement. There’s also irony in the fact that we’ve come to be known for our cowboy boots, which is an item of Western culture, but we preach about embracing your own,” he said.

This spurred a profound shift in the brand’s products and now, Yazıcı said, he has found a way to practice what he preaches.

“We’ve turned inward this year, focusing on local concepts. Now we want to introduce to the world traditional Turkish ‘efe’ boots," he said.

These boots are vastly different from the classic western style sported by John Wayne, and are known by the Turks as “körüklü çizme,” hailing from the western province of Aydın. This type of bellowed boot is known for being worn by Turkish warriors called “efe” (also called “zeybek” in the Aegean or “seğmen” in Central Anatolia) and have an accordion-like shape around the ankles. The folded leather, mostly three to seven folds, not only gives more agility to the wearer, which were usually horsemen or fighters and nowadays folk dancers, but it also allows the feet to breathe.

Of course, just by looking at its purpose of creation and the era, you can imagine how tough and durable this footwear must have been.

“That’s why we are trying to modernize this footwear item by interpreting its traditional form to fit our style and needs of modern life. We want to make it wearable," he said.

Unfortunately, owing to the costs of using high-quality leather and employing master artisans – of which there are only three in the world, located in the Aegean town of Söke – the products are pricier than most.

“There aren’t many artisans who can do what they’re doing, and new apprentices or assistant masters aren’t being trained,” he said. Becoming a master in this craft takes 30 years, which is one of the main reasons why people don't learn the trade anymore.

“If I wanted to become a master, I’d be so in my 70s,” he said, laughing and giving away his age, drawing a mutual giggle.

If you look at the clothes we wear today, you’ll see none of us is wearing traditional Turkish clothes, let alone those inspired by them.

In Japan or India, for example, you can see they try their utmost to preserve their traditional clothes and culture, said Yazıcı. They may not wear them daily, but during certain times of the year and during certain events these clothes take center stage, and the world identifies these garments with that culture.

“Japan has its kimonos, Mexico has its boleros. Latin America has done a great job of promoting its motifs and clothing styles. We need to introduce to the world patterns and molds that aren’t already present in the western world of fashion. Everyone can make a leather jacket and cowboy boots but not everyone can do something special to your culture,” he said.

A wearable interpretation of a classic Black Sea ensemble or the “efe” boot will be different and unique for western buyers. Then you can even get it patented, he said, but added: “You can’t do this by copying to a T the traditional design; you need to revamp it according to the modern world.”

That's what he plans to do, with thinner soles and a lighter shoe made of more flexible leather that will come alive in a shape that exudes Turkish culture.