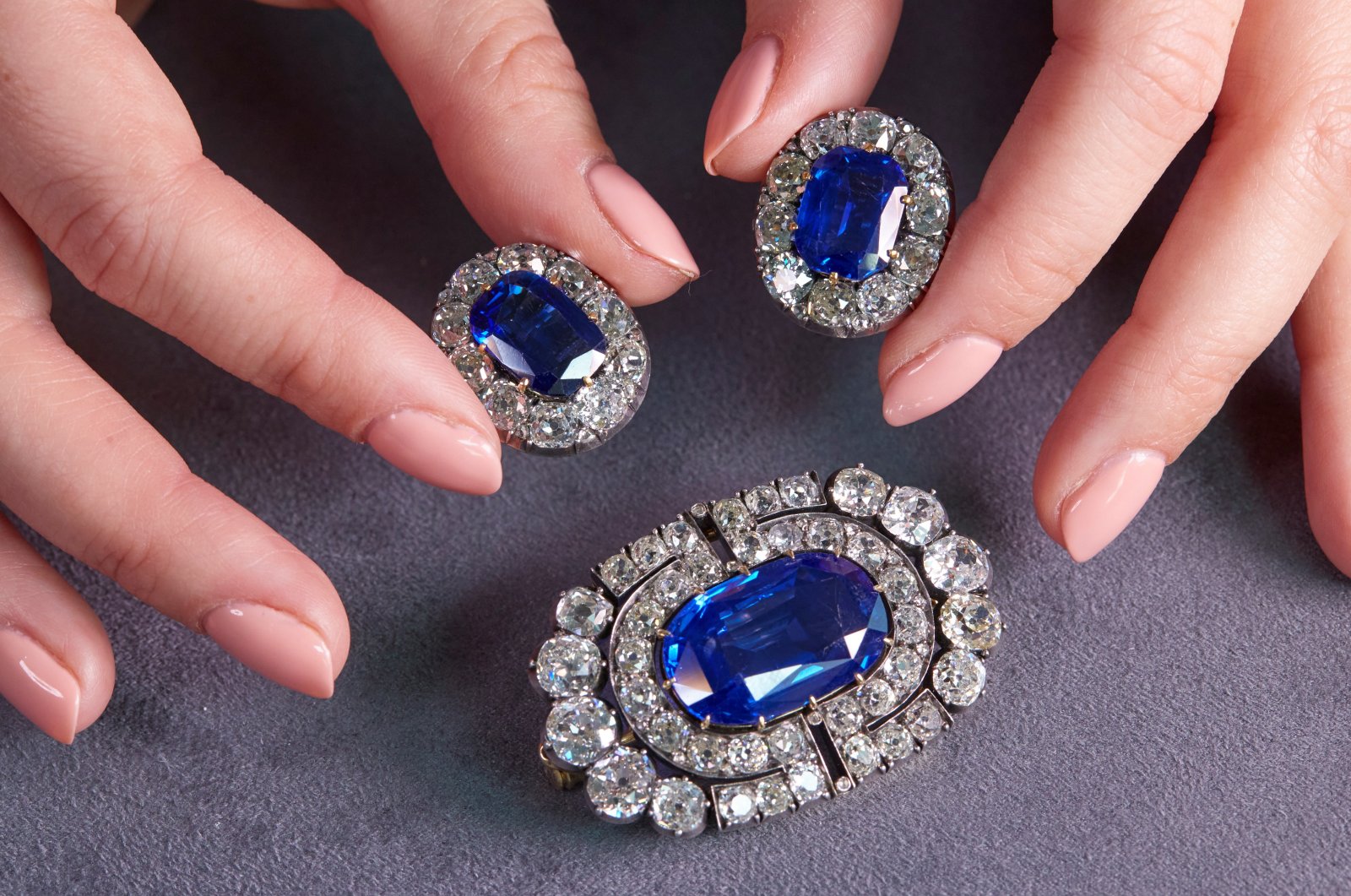 A staff member holds a historically valuable sapphire and diamond brooch and a pair of ear clips during a preview at Sotheby's, before their auction sale in Geneva, Switzerland, Nov. 2, 2021. (Reuters Photo)
by French Press Agency - AFP Nov 10, 2021 9:44 pm
RECOMMENDED

A sapphire-and-diamond brooch and matching ear clips that once belonged to Russia's Romanov imperial dynasty went under the hammer at a Sotheby's auction Wednesday for $850,000.

The jewels, which belonged to Grand Duchess Maria Pavlovna the Elder (1854-1920), the aunt of the last czar, Nicholas II, were smuggled out of Russia for safekeeping during the 1917 revolution in which the czar, his wife and their children were massacred.

Sotheby's said it was rare that jewels with such a "storied provenance" come to auction, and that "the appearance of these stunning sapphire and diamond pieces sparked interest from collectors worldwide."

Dating from around 1900, the brooch contains an oval sapphire from Ceylon, now Sri Lanka, weighing 26.80 carats.

The ear clips have step-cut sapphires weighing 6.69 and 9.36 carats respectively.

During the Russian revolution, Maria Pavlovna, who had a legendary passion for jewels, entrusted her jewelry to British diplomat Albert Henry Stopford.

Dressed in workman's clothes, Stopford had collected the jewels from Vladimir Palace in Saint Petersburg. He dismantled them, folding the pieces into old newspaper for protection.

The aristocrat and antiques dealer set out for London on Sept. 26, 1917 carrying 244 pieces of Maria Pavlovna's jewels in a bag.

Among them were the sapphire brooch and earrings, and the Vladimir Tiara, now owned by Britain's Queen Elizabeth II.

"After an incredible journey through all the countries of Scandinavia, he arrived in London by boat, where he deposited the jewels in a bank safe," Sotheby's head of sale Olivier Wagner told Agence France-Presse (AFP) before Wednesday's auction.

Pavlovna, often referred to as the "Queen of St. Petersburg," was one of the last Romanovs to leave Russia when she finally fled in 1919.

She died in France a year later.

The jewels were passed to her daughter, Princess Elena of Greece and Denmark, and then down through the family until they were first auctioned by Sotheby's Geneva in 2009.

Back then, they were purchased by a European aristocratic family for almost $500,000.

Wagner said before Wednesday's sale that he expected a "very good result," pointing out that the sapphire market had grown a lot since the jewels last changed owners.

Besides the grand duchess's jewels, the biggest-ticket item during Wednesday's sale was a set of two identical square-cut diamond earrings, which went under the hammer for nearly $5.7 million, including premiums.