I, a journalist, lived through the hell of July 15 in the heart of Istanbul 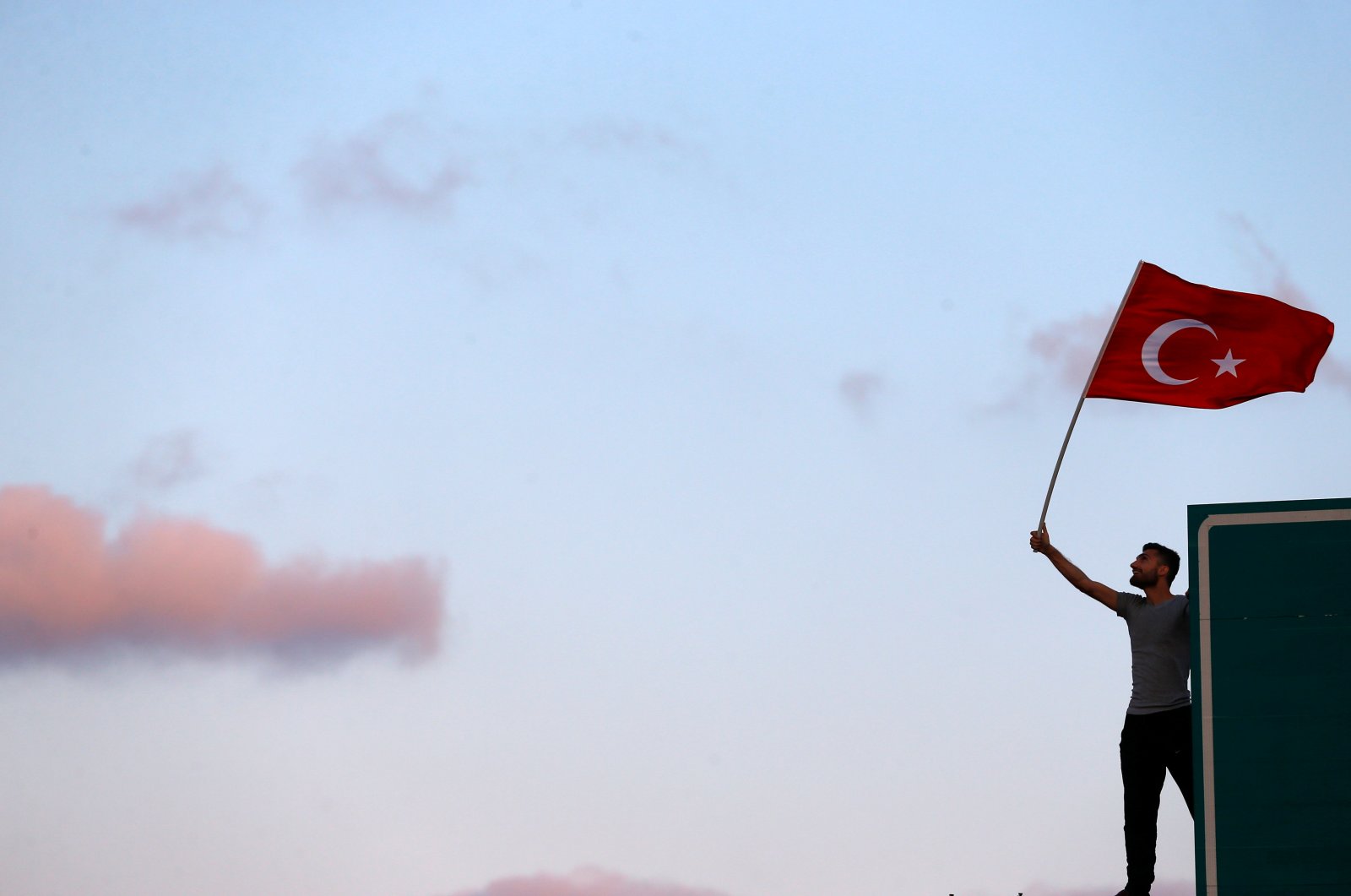 A man waves a Turkish national flag as he attends a ceremony marking the first anniversary of the attempted coup at the July 15 Martyrs Bridge in Istanbul, Turkey, July 15, 2017. (Reuters Photo)
by Emre Başaran Jul 14, 2020 11:25 am

The Gülenist coup attempt on July 15, 2016 was nothing short of hell on earth. I understand how relatively mild my experience was when I reflect on all the martyrs and veterans who put their lives on the line that night

It was just another day at the Daily Sabah office in Beşiktaş. I had come to my workplace as usual, sometime in the late afternoon, as I was working the night shift. Nothing seemed suspicious or out of the ordinary, and it was simply a regular night at work. The next day was supposed to be my day off, so I was happy that I would get a good rest. But, it seems, fate had other plans.

It all started unraveling with the news that the bridges on the Bosporus were cut off for traffic. There were a lot of speculations on social media, with some trying to calm others by saying it was just an anti-terrorism operation. The thought of a possible coup had not even crossed anyone's mind. After all, it made no sense – just look at Turkey's past. The Gülenist Terror Group (FETÖ), as they would later come to be known as, and their infiltrators in the ranks of the army would beg to differ.

Two hours into my shift, the web team and I started to see some videos circulating on Twitter that were the early signs of a coup d’etat in the making.

“Go to your homes, there’s a military coup in progress,” a soldier was saying in the very first video I saw. Those words sent shivers down my spine. I could not believe what I had just seen. My brain was trying to convince me that it was some unfunny joke and maybe even a public relations stunt.

As things became clear, a sense of overwhelming fear washed over me. Even though I was in an office safeguarded by security personnel, my home was on the other side of the Bosporus and my only way of getting there – the bridge – was cut off by coupists. I would have to seek refuge in the building I was in. I was away from my family, my loved ones and my housemate, and that was how it was going to be.

However, to my surprise, that initial fear did not last very long. The events and atmosphere I experienced would soon make me forget it all.

Anyone would feel scared if they heard bullets being fired all around them. You would expect people to tremble when confronted with troops armed from head to toe. I thought I would feel those very emotions but was surprised to see that almost like a flip of the switch I went from being scared to the most courageous I had ever been in my life.

That night, FETÖ terrorists killed more than 251 civilians and wounded more than 2,190 people. I could have easily been one of them, but I was fortunately spared. I was shot at but luckily escaped.

I would later learn from an official document seized by the police that the rogue soldiers had plans to kill everyone inside our building had they not faced resistance from our security personnel and the police. That was the order they had received from their leaders and mastermind: Kill any journalist in an event of the slightest dissent. And if I know myself even a bit, I would not have kept quiet.

Security told us to gather at the back of the building. We waited there for quite some time. Our wait was interrupted by a call from my manager. “If you can, get back to the office. We need all the help we can get from our editors,” he told me. I got back to work, pleading to security personnel that I had to. As I didn’t have my laptop with me, I had to go back to my desk.

The resistance in Istanbul and Ankara, civilians being shot at by coupists, innocents being crushed under the tanks – I would soon see it all. I, too, was covering what was happening in Turkey that night, no matter how hard it was for me at the time. Five minutes into work, we heard the deafening sound of bullets.

“Emre, have you hit the deck?” a colleague asked me from afar on the first floor.

“Yes,” I responded. I was under the table, hoping to keep safe from the bullets.

Looking back, I am truly amazed at how I did not feel even the slightest bit of fear in that moment. It was crazy how levelheaded I was. If the same incident happened again, I would be scared to death. But not during the July 15 coup attempt. I was courageous, even more courageous than I would ever imagine.

A miraculous set of events transpired when I was under the table. My concerned and anxious mom, who lives 500 kilometers (310 miles) away from me, called me what felt like 50 times that night. As I am an only child, she can get panicky even during a normal day, especially if I was not to hear her ringtone and fail to get back to her within five minutes.

I saw her calls many times when I was hiding under that table. And no, I could not have answered because if she had heard the bullets, she would have lost her mind. To make matters worse, she picked the most inconvenient times – whenever a soldier started shooting, she would be ringing. The first shots that targeted our building came right after I had ended my first call with her. The timing was unbelievable.

As a considerate son, of course, I was lying to eternity. “No mom, it’s all quiet here. I haven’t even seen a single soldier. Please be careful yourself, I’m in the clear here.” Yes, everybody tells (white) lies from time to time, and those are the only lies I do not feel guilty about.

I tried to imagine what she felt: A woman in her 50s, who lived through the 1980 coup and lived under military rule for several years was now also facing the reality of another possible coup, and away from her only son.

After shooting at our building countless times, FETÖ troops withdrew upon heavy resistance from the police and our own security personnel. I cannot thank them enough for putting their lives on the line for our safety. Soon after, thankfully, the coupists were on their way out. A colleague called us to get in his car and drove us all home.

As I got out of the vehicle, I kid you not, it was like a scene out of "Call of Duty." F-16 warplanes buzzed around, their sonic booms following, and the noise of bullets being fired filled the air as people tried to rush to their homes without getting harmed. It was, unfortunately, not a game, and it was the stark reality.

Thankfully, however, the Turkish nation would unite and defend the democratically elected government, to quell this attempt once and for all. In a sense of total unity, the people of Turkey said a collective "no" to a possible FETÖ dictatorship. And thanks to them, I am alive today to tell my story.