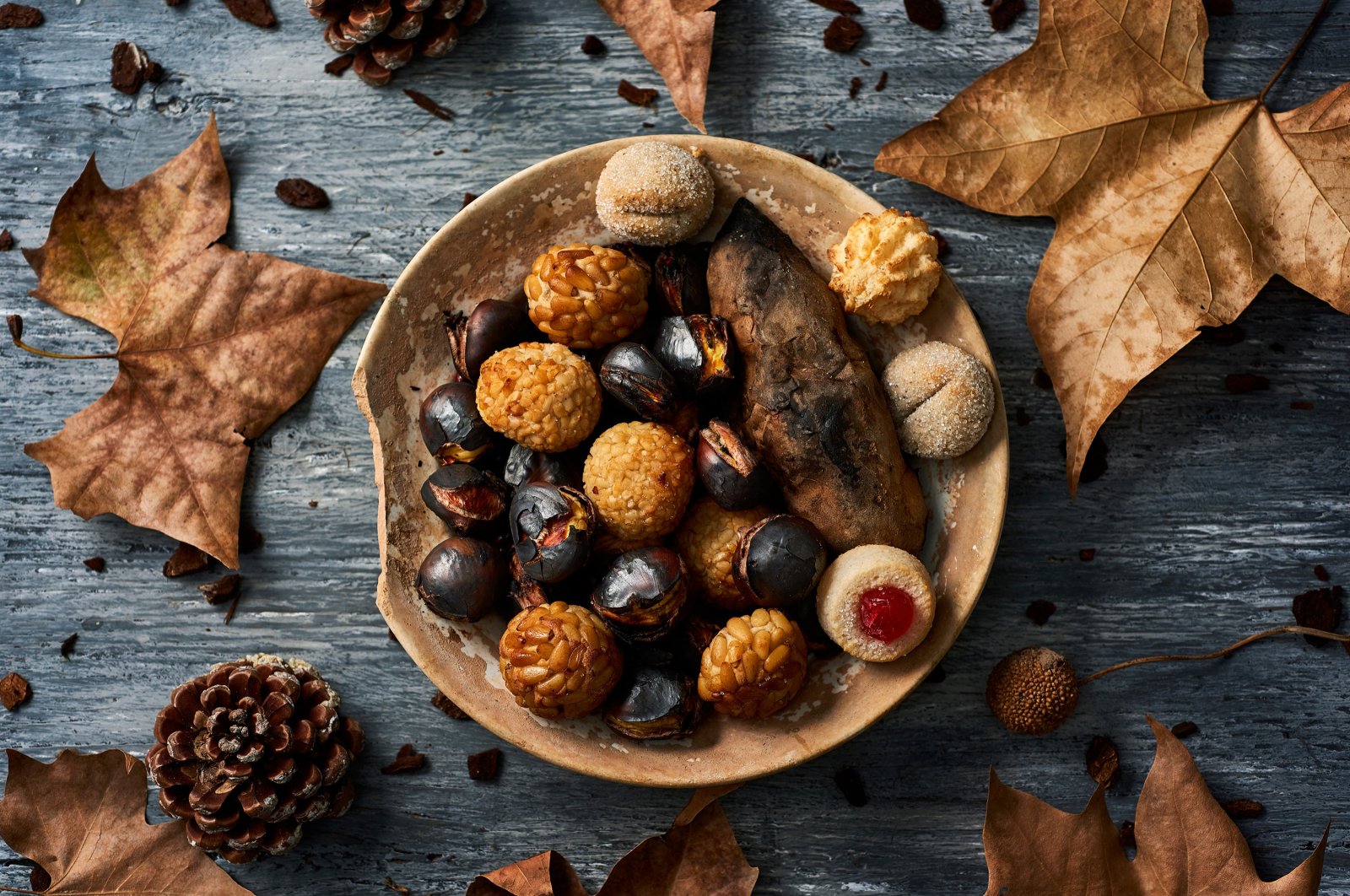 Come fall and cold weather, there are few foods like chestnuts that remind of us of coziness and our childhood. (Shutterstock Photo)
by Ayla Coşkun Nov 08, 2020 1:40 pm
Edited By Yasemin Nicola Sakay

Fall is the season for roasting chestnuts by the fire but fret not, you can still cook them without an open fire. Adding a sweet, caramelized and nutty flavor to any dish they are added, here are different ways to incorporate chestnuts into your meals

When one thinks of nuts, peanuts, hazelnuts and almonds are probably the first to come to mind as they are readily available to more people. However, chestnuts are often overlooked as they do not grow in the wet parts of the world – chestnut trees do not like having wet feet! Although they are considered to be different than tree nuts (such as walnuts, cashews or Brazil nuts) in the botanical sense, chestnuts are true nuts or fruits and have been a staple food in Turkey, Southern Europe and southwest and eastern Asia for millennia.

The yummy nuts are also high in protein, sweet and gluten-free, which makes them a great alternative for celiac disease patients who want to expand their dietary lists. You can even find chestnut flour, which Italians have been using in their recipes for centuries as farina dolce (sweet flour).

If you'd like to know more about this unique nut and ways to use them, keep on reading:

Can you eat chestnuts raw?

No, you definitely shouldn’t because they contain high amounts of tannic acid, which can cause kidney or liver damage and irritate your stomach. Although they do have a sweetish smell and flavor that may entice you to snack on them, stay away. You'll also need to get rid of their skins before eating them.

This is the most preferred and ironically Turkish way of preparing chestnuts. Once the first chestnuts of the season are collected, street vendors soon fill the streets with their carts or roasted chestnuts, their nutty aroma following them everywhere they go. Before roasting them, you'll need to draw a small cut in the peel of the nut and flip them over the fire periodically as not to burn them. If you have an open fire, you might want to roast them on a cast iron pan or alike instead of directly holding them over the fire via a roasting stick.

If you do not have access to a grill or barbecue, fire up your oven and get those chestnuts roasting! All you need to do is make small slits in the peel, either just one or in the shape of an X. Then place them on a baking tray, spread equally apart and cook them at 180 degrees Celsius (356 degrees Fahrenheit) for about 20 minutes. You can check if they have baked through by removing one to see if the nutty part has softened. Let them cool off slightly before you start peeling off the skin. The thick outer shell and the thinner fuzzy shell should come off easily at this point. If a chestnut is hard to peel despite being roasted, it may not be a good one and could be spoiled.

While the oven-baked version can dry chestnuts out a bit, especially if you overbake them, you can always boil them, which yields a softer result. Personally speaking, I just toss them into the water as is and let them cook for about 20 minutes. Usually, when the water turns darker, that’s my cue that they are done. But, of course, you can puncture them which makes them soften even faster though doing so may cause them to lose some of their flavor. Leaving the peel intact also makes them taste sweeter. Once out of the water, use a small knife to remove the softened shell and enjoy.

I had never even considered this option until I researched this topic. To cook your chestnuts in the microwave safely, you’ll need to cut the chestnuts in half – but not just the peel; cut through them completely. Then place them in a microwave-safe bowl or plate and make sure not to overpack it. Cook them at the “potato” setting for 2-4 minutes depending on your microwave and its functions. It's best to test along the way to see if they have softened and if not give them another minute at the same setting.

Once you have cooked your chestnuts, you can eat them as is, but if you fancy something sweeter, a dessert is the way to go. Turkey’s traditional chestnut candy, aka “kestane şekeri,” is famous in northwestern Bursa province, for example. There are also many varieties of cakes that utilize the unique flavor of these nuts. Another interesting dessert to make out of chestnuts is Swiss vermicelli, which is also called “Kastanienreis,” literally meaning chestnut rice because the sugar and chestnut mixture is formed into spaghetti-like shapes, which can break off to look like rice.

If you want a quick little dessert and not to fuss around too much, you can mix chunks of cooked chestnuts with some crushed biscuits and a bit of milk to form them into truffles. Covered in chocolate, they will definitely satisfy your cravings.

The nutty flavor of chestnuts makes it a perfect filling or side for many meaty dishes. From stuffed chicken to classic meatloaf, chestnuts make a great pairing, and their flavor can be enhanced with a variety of spices – cinnamon suits it surprisingly well. Chestnut soup (recipe here) is also a great way to use up chestnuts, especially with cream, making it the perfect starter for an autumn dinner table. A more Turkish way of using chestnuts in a savory dish is to add them to rice. Combined with some dried apricots, pistachios and some dill, this recipe has a royal air that is rich and decadent.

First, start by cooking the chestnuts in the way you want. I would advise the roasting route because they keep their shape better and the roasted flavor seems to better complement the rice. While peeling the chestnuts let the rice rest in boiled hot water for at least 20 minutes. Chop the onions and saute them with olive oil. Meanwhile, chop the apricots into small pieces, peel the thin skin of the pistachios if you so desire and halve or quarter your cooked chestnuts. Once the onions have softened, add in the chestnuts, apricots and pistachios and roast them together for a bit. Add the rice after sifting the water away, stir and fry them together for a minute. Then add the 350-400 milliliters of water or broth to it. While waiting for it to boil, add in the spices. Once it starts to boil, turn down the heat and let it cook for 10-15 minutes. The rice will not quite have taken in all of the water at this point. Add the chopped dill into the rice and stir it until it is fully incorporated. Turn the heat off and keep the lid on the pot to let it rest for a bit. After another 10-15 minutes, you can serve the rice and enjoy the fusion of flavors it has to offer.