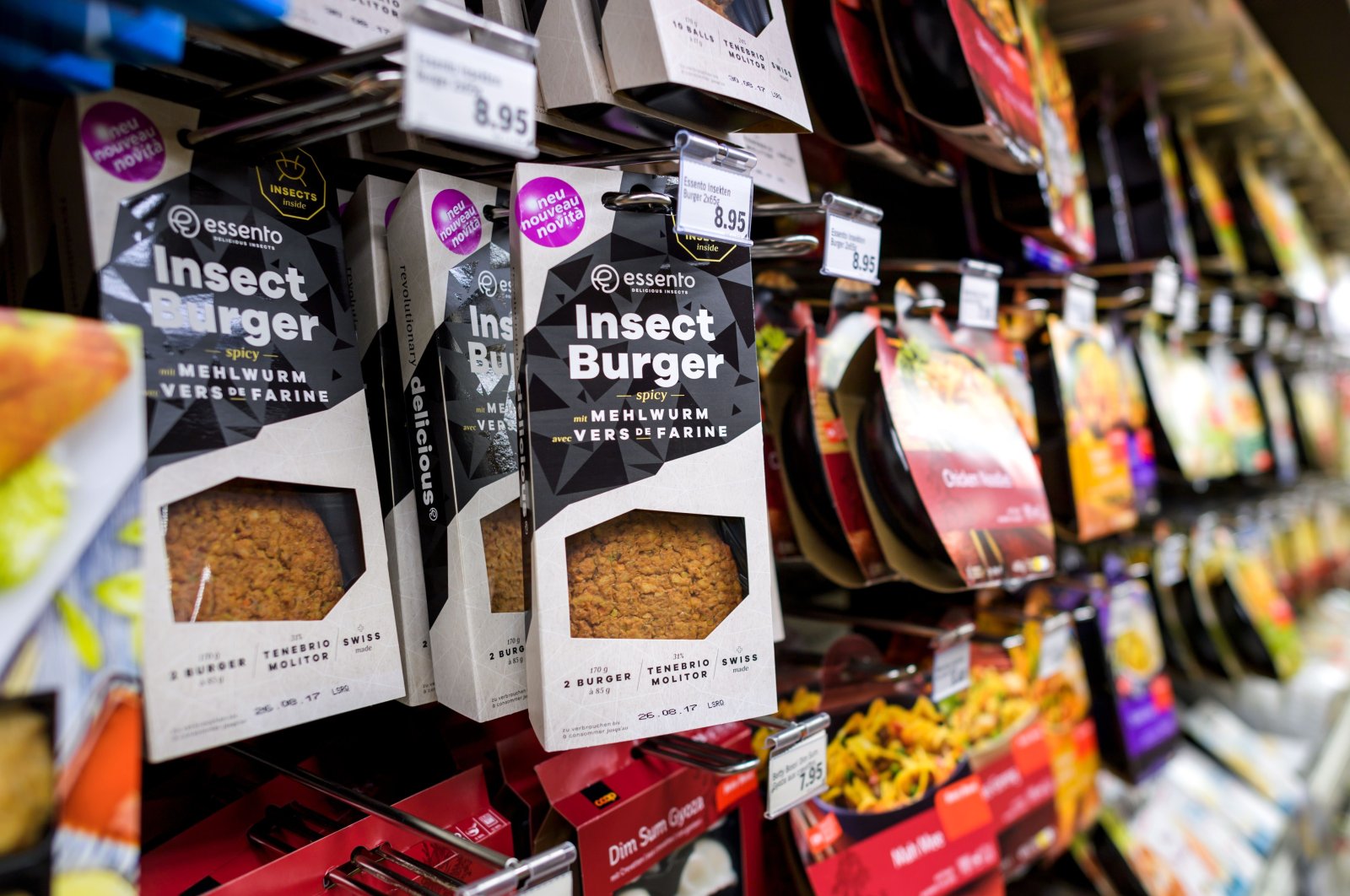 In this file photo taken on Aug. 21, 2017, packs of precooked insect burgers based on protein-rich mealworm are seen on a supermarket shelf in Geneva, Switzerland. (AFP Photo)
by Agencies
Jan 14, 2021 2:25 pm

Foods made with dried yellow mealworm – be it energy bars, pasta or biscuits – could soon hit grocery store shelves in Europe.

The European Food Safety Authority (EFSA) said Wednesday an assessment found the yellow mealworm, either whole as a dried insect or in the form of a powder, to be fit for human consumption after an application from the French insect-rearing firm Micronutris.

Yellow mealworm – or Tenebrio molitor larva – is an insect species in the larval stage. It belongs to the family of darkling beetles, consisting "mainly of protein, fat and fiber," the report found but warned that more research needed to be done on possible allergic reactions to the insects.

It was the Italy-based agency's first full assessment of an "insect-derived food product." It is now up to the European Commission and European Union member states whether to grant approval.

Insects are a good source of protein and rearing them is more climate-friendly than other animals. But with a few exceptions, insect-based food products are rare in the EU.

"There are cognitive reasons derived from our social and cultural experiences, the so-called 'yuck factor' that makes the thought of eating insects repellent to many Europeans," Giovanni Sogari, a consumer researcher at the University of Parma, was quoted as saying by the agency.

"With time and exposure such attitudes can change," he said.

The burgeoning insect farming industry in Europe welcomed the decision and said they hoped to see authorities give permission for yellow mealworms to be marketed to the public by the middle of this year.

The ruling is the first completed risk assessment of an insect food product application by the agency as it looks to approve a potential boom sector that could provide a sustainable source of protein. It could "pave the way for the first EU-wide approval," Ermolaos Ververis, a scientific officer in EFSA's NUTRI unit, said in a statement.

The Italy-based EFSA has more insect investigations on its plate and is also set to examine if crickets and grasshoppers are fit for consumption.

Insects are widely eaten elsewhere around the globe with an estimated 1,000 species finding their way onto dinner plates of some 2 billion people in Africa, Asia and Latin America. They are already available for human consumption in a small number of EU countries and are more widely produced for use in animal feed. The industry says it expects the European market for insect-based food products to grow rapidly in the coming years and for production to reach some 260,000 tons by 2030.