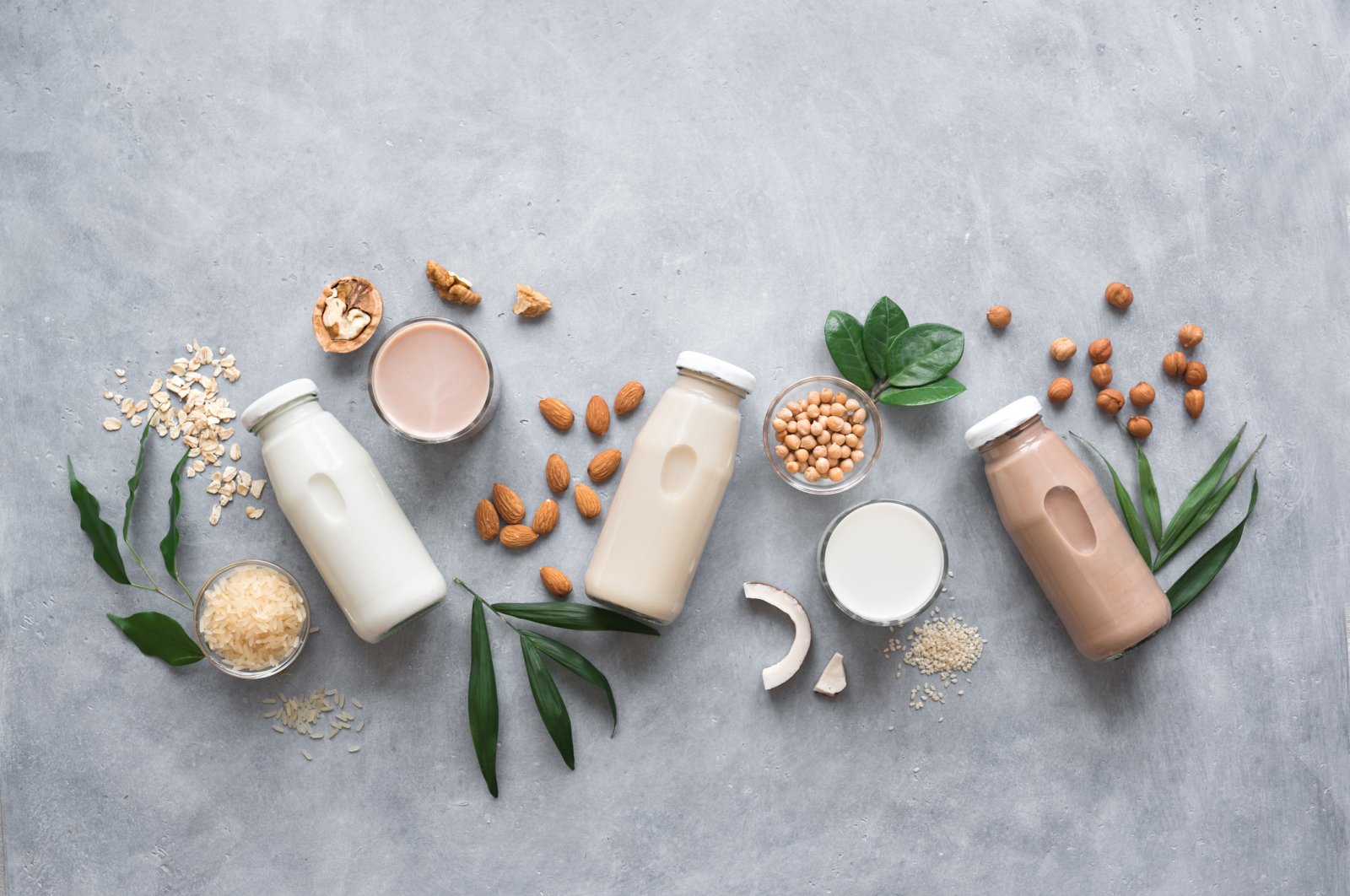 When dairy and lactose just don't agree with you, there are plenty of plant-based milks to choose from. (iStock Photo)
by Mindy Yartaşı Jun 24, 2020 11:35 am
Edited By Yasemin Nicola Sakay

Many are turning to plant-based options to substitute cow’s milk in their diet, but can they really compete with the lactose-laden original and how do you choose which one is right for you?

Though cow’s milk is widely used to lighten coffee, dunk Oreos and as a base for our favorite smoothies, plant-based milks have seen a rise in popularity worldwide over the past decade. The trend has spurred debates on whether lactose-free options can really compete with their traditional counterpart while leaving others wondering how to choose the one that best fits their dietary needs.

The competition is stiff. Cow’s milk offers an impressive list of nutrients, with 1 cup (240 milliliters) of whole milk boasting 146 calories, 8 grams of fat, 8 grams of protein and 13 grams of carbohydrates in addition to essential vitamins and minerals like phosphorus, calcium and vitamin B. However, due to concerns over potential health risks associated with industrial animal husbandry, chronic health conditions or personal preferences, cow’s milk is not a suitable option for everyone. If you’re also looking to make the switch or to simply try something new, here’s a list of the most popular plant-based milks and easy how-to tips for making a few of the delicious options at home.

With half the calories – 1 cup contains just 80-90 calories and 4-4.5 grams of fat – but almost the same amount of protein as cow’s milk with 7-9 grams per serving, soy milk has become one of the most popular nondairy substitutes by offering almost the same nutritional benefits as its lactose-laden counterpart. Loaded with fiber, potassium, B vitamins and magnesium, it is also a great source of essential amino acids found in its “complete” protein, which is not naturally produced by the body but essential for a balanced diet. In fact, soy milk contains the most protein out of all the nondairy options.
Though praised by some as a health food that helps with everything including menopause-induced hot flashes, the consumption of soy remains controversial. Due to its large amount of isoflavones, a type of plant estrogen that acts as a weak form of human estrogen when digested, soy products have raised concern about the possible effect the hormone might have on the body. Though widely debated, research suggests moderate amounts of soy is generally safe for healthy adults despite the presence of isoflavones and offers a wide range of health benefits and nutrients when part of a balanced diet.

The most hypoallergenic of the nondairy milks and the one with the closest flavor to cow’s milk, rice milk is an excellent option for those with allergies or intolerances to gluten, soy, dairy or nuts and is made from milled white or brown rice and water. It offers a neutral flavor and less creamy texture than other nondairy options, making it pleasant to drink on its own or as a substitute in recipes. Rice milk has a higher calorie content than some other plant-based options with 130-140 calories per cup. It is low in fat, with only 2-3 grams per cup, but with three times as many carbohydrates at 27-38 grams as its alternatives and 1 gram of protein per serving. It also has a high glycemic index (GI), meaning it tends to raise blood sugar levels quickly and isn’t recommended for regular consumption for those with diabetes.

Made from the water and white flesh of coconuts, coconut milk has a slightly sweet coconut flavor and creamy texture and is a diluted version of the canned variety commonly used in Southeast Asian and Indian dishes. It’s a great option for those looking to reduce their carbohydrate intake as the nondairy milk with the lowest carb content. It also has half the fat at 4 grams. However, store-bought versions can contain anywhere from 45 calories to 80 calories per cup – or more if canned. Though it contains little protein, almost 90% of the calories come from medium-chained triglycerides (MCTs), saturated fat research has shown to assist in weight loss, improve blood cholesterol levels and reduce appetite – though if you’re looking to reduce your saturated fat intake, this one may not be for you since just 1 cup contains 20%, or 4 grams, of our daily recommended intake of saturated fat. On the other hand, one serving also provides 30% of your daily recommended dose of vitamin D and 50% of your vitamin B12.

Almond milk is made by simply combining almonds or almond butter with water. Creamier and thicker than other nondairy alternatives thanks to its healthy, unsaturated fat content, it is a wonderful lactose-free alternative for those looking to cut calories but craving the creamy texture of regular milk. With only 30-35 calories and 2.5 grams of fat per cup, its slightly sweet, light flavor makes it a great low-calorie substitution for cow’s milk in baking and desserts, as well as a handy lightener for your coffee or tea. It is also a natural source of vitamin E, a disease-fighting antioxidant. Likewise, it’s heart-healthy as a cholesterol-free option, and its low carbohydrate levels make it a great option for those looking to control their blood sugar. Though almond milk does not provide the same amount of calcium as cow’s milk, one serving does contain 30% of the recommended daily amount as well as 25% of your daily vitamin D. As a downside, almonds also contain a substance called phytic acid, which can reduce your body’s ability to absorb zinc, iron and calcium, detracting somewhat from its nutritional benefits.

Making your own almond milk at home is easy and allows you to control the thickness and sweetness while giving you the chance to spice it up with fun aromas like vanilla, all the while avoiding additives often found in commercial versions. Soak 150-180 grams of raw almonds overnight in water in the refrigerator. Drain the almonds in the morning, quickly blanch them to peel them one by one (or skip if you have no patience) and then throw them in a blender with 1.2 liters of fresh water – or less depending on how thick you prefer it. Don’t forget to add a pinch of salt to bring out the almonds’ nutty flavor. At this point you can also opt for some add-ins like a teaspoon of vanilla, 2 tablespoons of cocoa powder, a couple pitted dates for sweetness or even a half of cup of fresh berries. After blending for a few minutes, strain the mixture through a thin dish towel, cheesecloth or if you have it a nut milk bag, and voila, you have your own almond milk. It will keep in the refrigerator for a maximum of five days.

Like its almond cousin, cashew milk is also made by blending the nuts or nut butter in water. This milk offers a subtle, slightly sweet, creamy alternative to cow’s milk and with around only 25-50 calories and 2-4 grams of fat per cup, it’s a great low-calorie alternative to cow’s milk and some other nondairy options. Like other nut-based milks, much of the protein fiber, vitamins and minerals are lost during the straining process for commercial versions, meaning it may not be the best option for those requiring a high-protein diet. Its low carbohydrate and sugar content make it a great option for those monitoring their blood sugar.

Cashew milk is super easy to make at home and provides much more health benefits than its store-bought version since the nuts can go unstrained for the end product, leaving all of the fiber and vitamins lost during the straining process in your milk. Soak 140 grams of raw cashews in water in the refrigerator overnight. Drain and rinse until the water runs clear. Throw them in a blender with 480 milliliters of water. Starting on a low setting and increasing as needed, pulverize the nuts in the water. At this point you can add your sweetener of choice, 1-2 tablespoons of maple syrup is a great option, and if you like a pinch of cinnamon or some vanilla, along with an additional 480 milliliters of water. Blend until well incorporated. If your blender is unable to completely break down the cashews, you can strain the milk through a fine strainer to remove any large pieces. It will keep in the refrigerator for three or four days.

Packed with healthy fiber, oat milk is simply a mixture of oats and water – but store-bought versions often contain extra ingredients like salt and oil meant to make it more appealing for consumers. Though it has about the same amount of calories at 120-170 per cup and around double the carbohydrates as whole cow’s milk, oat milk has less fat with 4.5-5 grams per cup. But the real health benefits lie in its healthy natural fiber called beta-glucan, which studies have found lowers cholesterol levels, reduces the risk of heart disease, increases the feeling of fullness and lowers blood sugar levels.

This milk is simple to make at home, just run 140 grams of uncooked rolled oats and 960 milliliters of water through a blender for 30-40 seconds until smooth. Sometimes prone to a “slimy” texture, straining it through a thin dishcloth twice after blending will help remove the excess starch that causes it to thicken; likewise, over blending can also lead to an undesired texture, so be sure to stick to the suggested timeframe. This milk can also be spiced or sweetened with vanilla, cinnamon or maple syrup, among other things. This homemade version of the milk keeps in the refrigerator for up to five days.

Substitutions: how to swap out cow's milk in recipes

As far as substituting plant-based milks for cow milk in recipes, all the options above – minus oat and rice milk – can be used in equal quantity for baking treats like cookies and cakes. In the end, though, most bakers prefer soy for its high protein content that aids in rising. When making savory sauces like an Alfredo or hollandaise, soy, oat and homemade almond milk work great thanks to their thick consistency and neutral flavor. Store-bought versions of almond and rice milk tend to be fairly sweet, so most reserve them for sweeter dishes and sauces. While any of the nondairy options can be used in beverages, oat milk has, hands down, become a go-to favorite for those craving a nondairy cappuccino thanks to its superior frothing capabilities. For things like smoothies, coffee, cereal and oatmeal, it comes down to personal preference, but all of the options above would do in a pinch.

*Disclaimer: The nutritional values provided are an estimate for store-bought versions. Homemade versions could be higher in calories and have different vitamin and mineral content.