November foods: The fruits, veggies and fish to eat in season in Turkey 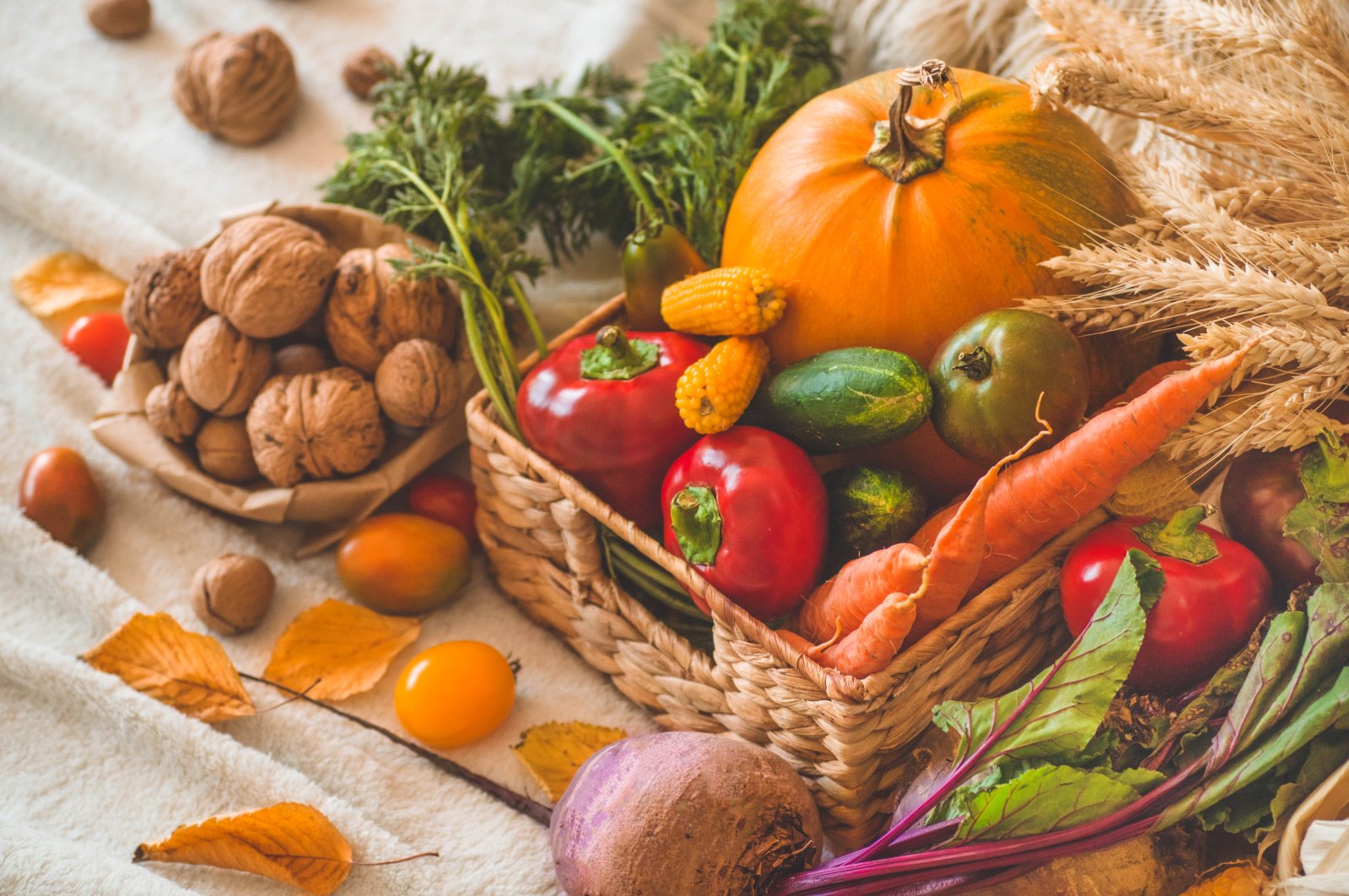 Fall has an array of delicious and colorful fruits and vegetables to offer. (Shutterstock Photo)
by Ayla Coşkun
Nov 15, 2020 11:40 am

Seasonal food is not only tastier and fresher but also healthier and more eco-friendly. If you want to know what's in season this month and into the winter and get some inspiration, keep reading

When one speaks of fruits and vegetables, most of the time our mind wanders to the abundance of juicy and colorful produce lining stalls in spring and summer, but the last month of fall, November, also has considerable gems to offer – especially if you are fortunate enough to live in Turkey. Here are some of the foods perfectly in season that you can enjoy even in the cooler months.

The last remnants of grapes can be seen adorning some bazaars, but that greatly depends on the region you live in. In southern regions, you’ll still be able to see them on stalls well into fall, unlike in the northern regions.

You know summer is close to its end when you see tangerines popping up on the stalls. These little vitamin C bombs are a great snack, especially for the young ones.

With Thanksgiving right around the corner, we shouldn’t forget another fruit signaling the start of fall: apples. While there are a variety of apples, you should keep in mind that the sour kind is the best kind for any apple dessert you plan on baking.

Another pop of color in any bazaar or grocery is Turkish bananas. Bananas do actually grow in Turkey, and the local variety is a bit smaller in size than the imported ones you might be used to. Of course, eating them fresh is always the best option, but in these months, you might want to indulge in making some banana bread or some yummy (and healthy) granola bars to snack on when the hunger pangs hit.

Another star but quite a hassle to clean up is the pomegranate. The rich flavor cannot be denied in any salad or the like.

Other fruits that are in season are pears, grapefruit, rosehip, quince and lemons.

Nothing screams fall and Thanksgiving louder than pumpkin. Be it for a soup, a pie or other yummy meal, this slightly sweet vegetable keeps on giving.

Root vegetables are also in season – think carrots, turnips, radishes and beets. Each has its own unique taste, and I am especially happy to get my hands on some nice, deep red beets to cook them and eat them just like that. Nothing seems more fall-ish than a beet, if you ask me.

Cauliflower is another vegetable that goes well with quite a few dishes. The German side in me immediately thinks of creamy cauliflower gratins. Or for a naughtier take, just dunk the little cooked florets into salty pancake dough and fry them. Serve with some garlic yogurt.

Celery and leeks are great for any vegetable dish and add a dose of flavor. In fact, this is the best time to buy some. Buy in bulk when dirt cheap, wash well, chop them up and toss them into the freezer. If you group them into a good mix of veggies, you will get the perfect base for any vegetable broth or soup.

Last but definitely not least is cabbage. Any color, red or white, has a lot to offer in terms of nutrition and flavor. One particularly good dish is white cabbage rolls, and the recipe is at the end of this article.

With the arrival of September, fish season official starts in Turkey, and in a country almost completely surrounded by the sea, it would be a shame not to have at least a taste of the different kinds of fish that are available. One big plus when living in Turkey is that for a small fee or sometimes for free, fish sellers do most of the cleaning of the fish for you. With that service handy, you won't be able to make excuses that cleaning the scales and guts makes the house smell like fish.

The most widely-known and loved fish is a Black Sea classic called "hamsi" in Turkish. Known as Anatolian anchovies in English, this type of fish is commonly associated with the Black Sea but can be found in the Marmara Sea as well. There is a slew of different ways this tiny fish can be prepared – from at least two different pilaf versions to using them in an unorthodox veggie fish pancake.

Turkish mezgit is called both whiting and haddock in English, with the latter being meatier. No matter the size of the fish, it is incredibly mild in flavor and very velvety. The only problem is that this softness can create a slippery problem while cleaning it. If you have family members or friends that are not that into fish, this is a good choice to start with.

Palamut is a tuna-like fish and the Turkish name for the Atlantic bonito, or at least the closest fish in its family. This fish is usually a bit meatier and bigger than mezgit and is perfect for grilling or baking in the oven. Frying is, of course, always an option, but it is generally best to fry smaller, less meaty fish.

Gilt-head bream (or sea bream), called "çipura" in Turkish, has a different flavor than palamut and smaller bones which can be a bit annoying for some eaters.

Levrek (seabass) and uskumru (Atlantic mackerel) are two other fish types that are perfect to enjoy in this cold season as well.

How to make cabbage rolls

As mentioned above, nothing feels more like fall than cabbage rolls. Though not limited to Turkey, these rolls can be found pretty much all over the world and can be enjoyed with both meaty and vegetarian fillings. Here is our recipe, which is vegan!

Peel off the leaves of the cabbage and boil them in salty water for two to three minutes to soften them up. Do not let them boil for too long or else they will fall apart. They should be malleable but not too hard. Let them drip off on the side.

Chop the onions and saute them in a pot with some oil. Once they have softened, add one tablespoon of the tomato paste and add the rice in as well. Cook them for a few minutes. Add about 100 milliliters of water (about 1/2 cup), the spices and the chopped parsley, and cook until the rice has absorbed the water.

Depending on the size of your cabbage leaves, you might want to halve them or even quarter them. Put a tablespoon of the filling inside (or more if you'd like the rolls to be bigger) and roll them up, making sure to fold in the sides after your first roll so the filling doesn't escape. When placing them into a pot, make sure to first place one or two leaves at the very bottom and then start adding the rolls all around the pot, packing them as tightly as possible.

Depending on how high the rolls reach in the pot, you’ll want to adjust the amount of sauce you will make when cooking. Dilute one tablespoon of tomato paste with enough water and pour it into the pot, making sure it is just shy of covering the rolls. The rolls should not be swimming in the saucey water. Add about five or six tablespoons of oil and a dash of salt as the finishing touch as you let them cook.

Close the lid and bring the pot to a boil on high heat. Lower the heat after it starts bubbling and cook the rolls until the rice and cabbage leaves have softened. This might take about 15-20 minutes or longer depending on the thickness of the cabbage leaves.