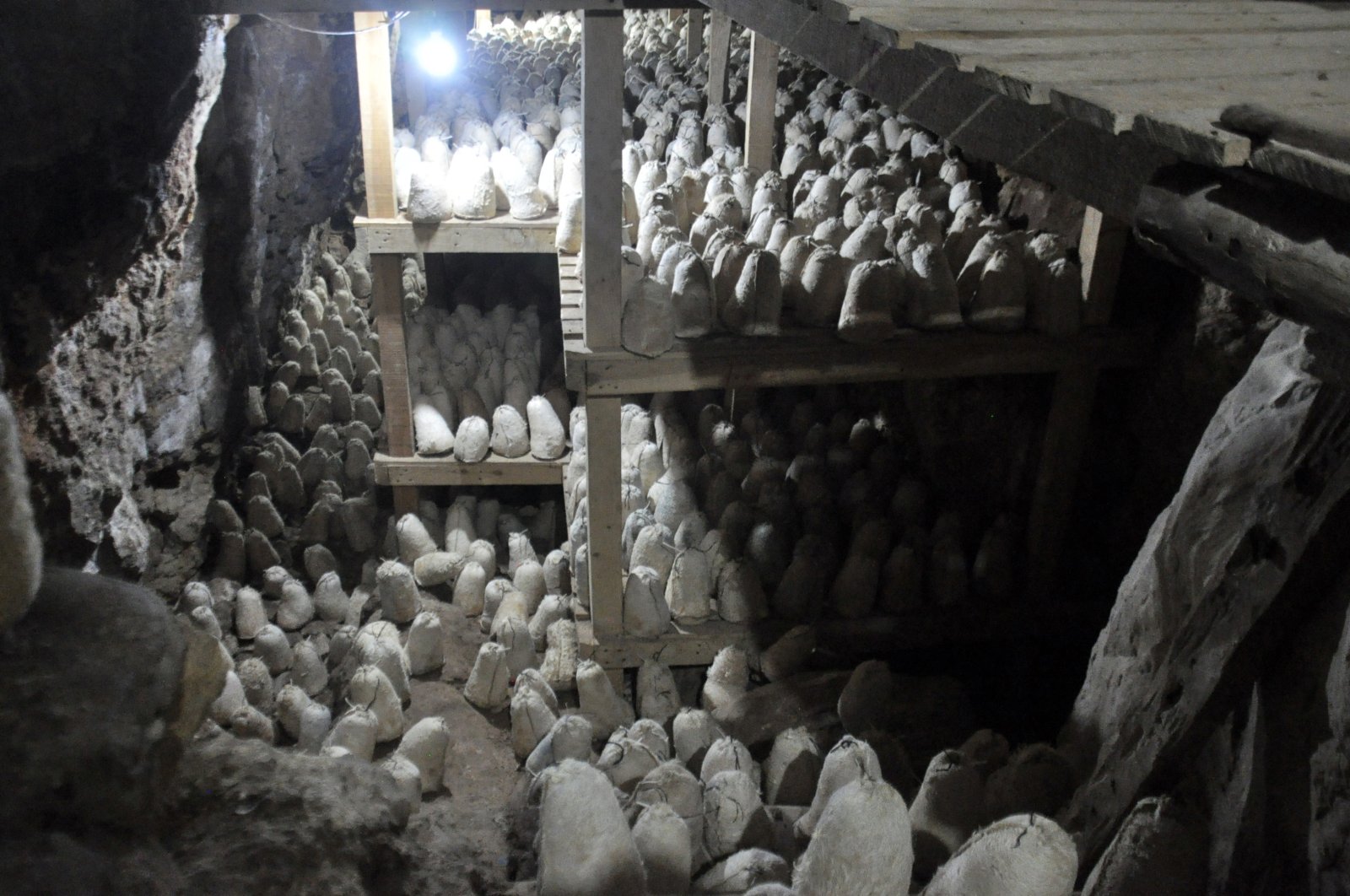 The Divle cave cheese will be ready to be consumed in the fall. (DHA Photo)
by DAILY SABAH Jun 08, 2020 1:30 pm
Edited By Yasemin Nicola Sakay
RECOMMENDED

A special type of cave-aged cheese in Turkey has set its sights on becoming a rival to France's famed salty blue cheese, Roquefort.

At the foot of the Taurus Mountains in the central Anatolian province of Karaman, the villagers of Divle (also known as Üçharman) and eight other nearby towns have rolled up their sleeves to begin a six-month, tiring yet rewarding journey to produce the region's famed dairy product: Divle Cave cheese. With the arrival of April and May begins the milking of goats and Akkaraman and Morkaraman sheep who graze on the golden pastures of the province.

Sheltered from the scorching summer heat in the barren lands of Anatolia, the goat and sheep milk collected by locals first is left to rest, with the curds that form heated and then pressed and hung up in cloth to get rid of the excess water. A day later, the cheese is ready to be cut, washed and salted, and be carried to its final place of resting where it gets its own unique flavor.

Fermenting in specially sewn sacks of sheep and goat skins called tulum, the cheese day by day takes in its aroma from the microflora inside the cave, eventually producing something similar to Roquefort – tangy, crumbly and moist, with each batch having its own earthy notes or hints of pasture grass.

Stuffed inside these sacks as true to Anatolian tradition, the cheese rests inside the cool, narrow cave 36 meters (118 feet) underground that stretches 256 meters, slowly turning a purplish or reddish shade from its initial white, as mold covers the containers.

With an average temperature of 7 degrees Celcius (44.6 degrees Fahrenheit) throughout summer and winter with 99% humidity, the cave provides the perfect breeding ground for the Penicillium roqueforti strains.

Left to ripen until fall in the dark, muggy cavity, the cheese sells out super fast once it goes on sale, attracting buyers from all over the world.

Like with any popular product, counterfeits have popped up on the market. Locals warn that the real Divle Cave cheese has a geolocation mark and barcode that ensures authenticity.

The cheese is considered one of the world's five highest-quality kinds of cheese for its unique taste and aroma by expert foodies.