The unifying power of food: An African breeze in Istanbul 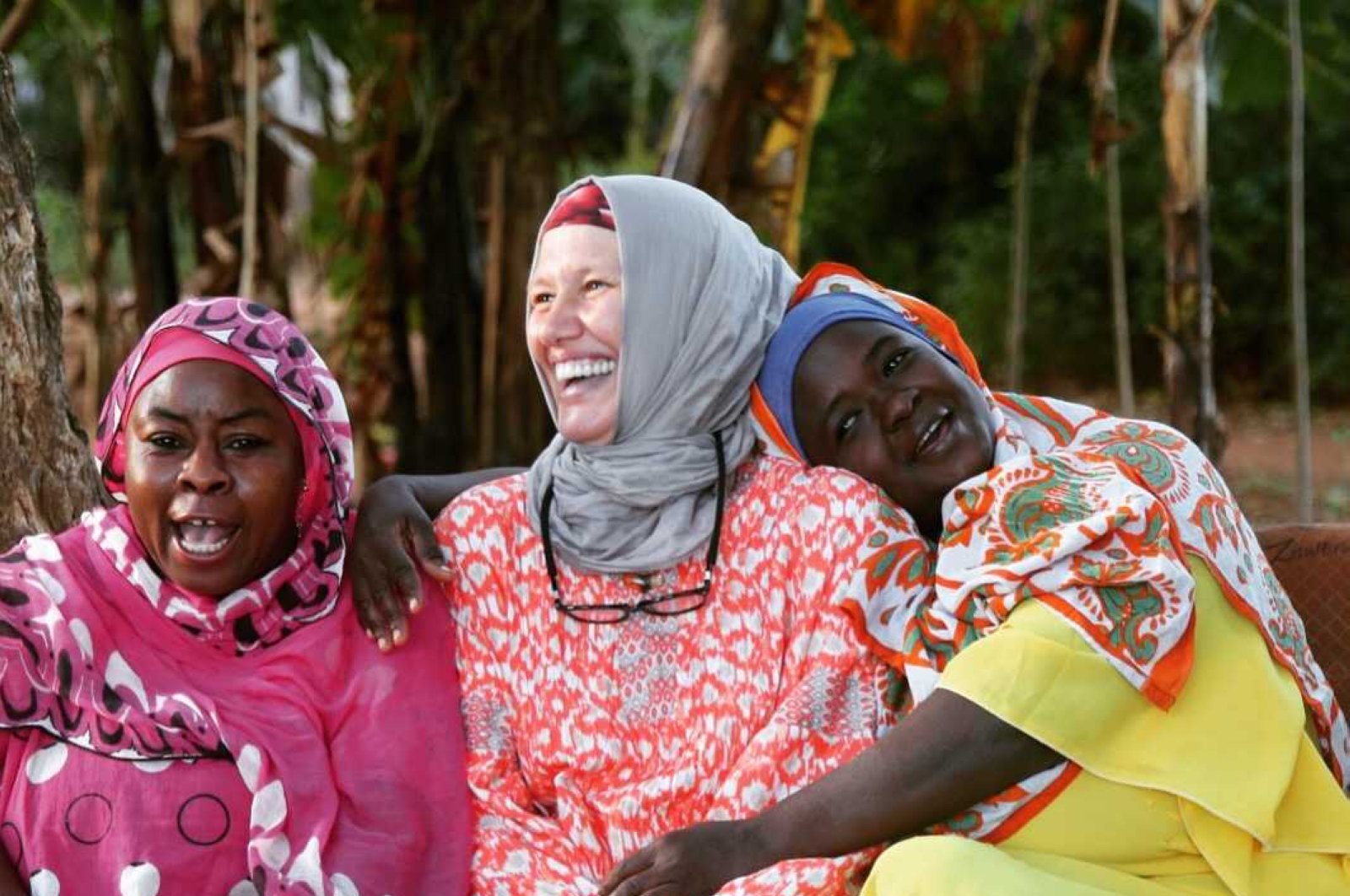 Kevser Aydoğdu (center) said she will always cherish the time she spent in Zanzibar where she fell in love with its culture and people. (Photo courtesy of the Assalam Community Foundation)
by Meltem Sarsılmaz Mar 08, 2020 11:58 am

This is the story of a Turkish woman who went to Zanzibar as a volunteer and was so captivated by the flavors she savored, the colors she saw and the people she met there that she wanted to give Istanbulites a taste of her experience

Let's imagine a huge table where the food never diminishes and with every single plate, we come across a completely different flavor. Here, we can liken world cuisine to a kitchen containing dozens of colorful plates that are constantly renewed. Even if we speak different languages and have different skin colors, we all consume food as eating is one of the basic needs we all share. However, where we live, our culture and sociological structure deeply influence the meals we eat. That's why there are so many plates and dishes to choose from on this huge world cuisine table. Unfortunately, our life may not be long enough to go and taste all of these wonderful flavors.

Before a meal arrives on our plate, the recipe may have taken a long and exciting adventure, meeting our fork or spoon with layers of historical richness. We taste not only the herbs and the spices but also that culture in a sense. Thanks to growing mobility in recent years and globalization, we can now taste the flavors of different communities in our city. In Istanbul, we can easily access so many unique dishes: Iranian, Malaysian, Chinese, South Korean, the list goes on... A cafe in the Çengelköy neighborhood of Üsküdar brings to us the rich cuisine of Zanzibar.

Located 7,479 kilometers away from Turkey, Zanzibar is an island nation located in the southern hemisphere and a semi-autonomous region of Tanzania consisting of many small islets in the east of the African continent. This large distance between Zanzibar and Turkey, however, has started to close in our hearts thanks to all the volunteering efforts carried out in recent years. This cafe is just one of the many friendships and solidified togetherness that transcends borders.

So, where exactly does this story of these two kitchens meeting start?

'Africa chose me, not I'

Kevser Aydoğdu's African adventure began with volunteer work. As a chemistry graduate working in the food industry for many years, Aydoğdu wanted to use her interest in the kitchen and her experience in the field in her work as a volunteer and thus came across the continent Africa. While looking for a field to work in that combined both of these passions, she saw a post by the Assalam Community Foundation on Instagram and immediately thought it was just the thing she was looking for. "I applied to all the charities I knew, but I wanted to be out on the field working with people. They were mostly looking for office workers behind the scenes or medical staff such as doctors and nurses. Then when I saw Assalam and CafeAfrica, I got looking deeper into what they were doing. I thought that if I were there, I could help out immensely." She then attended an event hosted by Assalam to tell them in person what a 50-year-old woman can do on a continent she has never been to and how she would be of help.

"When I saw Assalam's post, I thought that I should go and meet them and apply to volunteer. At the event I attended, I met Hatice." Hatice was direct as ever in her questions: "Are you sure this where you want to come? There are other options." Seeing the hesitation in her eyes, Aydoğdu did everything she could do to persuade her. She told her what she was doing now and what she could do in the future. With this journey she embarked on as a volunteer, she had the opportunity to get to know African cuisine – a food culture so very different from us – and introduce it to people back home.

Later in Istanbul, they opened one leg of the CafeAfrica project, which was launched in order to tell people about their work in Africa, to sell dolls and bags made by widowed mothers, and to attract the attention of incoming tourists. Aydoğdu currently leads the kitchen at this cafe, which aims to both explain the activities they do to help people and to introduce Zanzibar cuisine to Turks. "What we did at the cafe in Africa was very good, and then we said, why not do such a thing in Turkey? Let us explain ourselves to people wondering about the people of Zanzibar. Now they want to buy our bags and dolls too. We had to design a menu for this place as well. It was so good for me to go to Africa and live there and experience it firsthand."

After designing a menu for CafeAfrica during her time in Zanzibar to introduce locals to Turkish cuisine, Aydoğdu also wanted to promote Zanzibari delicacies in Istanbul. However, since the tastes of both cuisines are quite different from each other, Aydoğdu decided to interpret the dishes in a way that provided a smooth, soft transition and gave it her own spin. "Here we had to do something like this because we wanted people to be eased into this new palate of taste from Africa. I thought about what we could do to facilitate this transition because there were some big differences eating-culture wise. Of course, it was an innovative study. Of course, not all dishes could be interpreted in a way that combined both Zanzibar and Turkish elements, it was also not possible to find all the ingredients. So we tried to stick to the original as much as possible but made small tweaks." For example, there are Maasai teas or a typical Tuareg brew or porridge, representing the Tuareg tribe itself, which consists of millet, banana and persimmon and is usually served at breakfast.

"I was so happy to learn something new and different in the kitchen. You want to learn and explore new flavors," Aydoğdu said.

Saying that she was surprised when she first set foot in Zanzibar, Aydoğdu says she was full of excitement because of all the different tastes she had yet to discover. All the different fruits and vegetables from a different continent, culture and cuisine caught the volunteers, who went there for the first time, by surprise, she added. When they started to get used to the culinary culture there, they started to see similarities with Turkish cuisine. ''Actually, I think the dishes are similar in general. For example, there is rice, and there are beans on it. If we think about it, for example, they also make bite-like foods from chickpea flour. We use white flour; they use chickpea flour. In this sense, cuisine sort of has a common ground, a unifying power."

Of course, despite these similarities, because we are talking about a completely different geography, a rather different culinary culture emerges. Fish is a very important food in Zanzibar – it's only natural when you are surrounded by the vast ocean. In fact, Aydoğdu said while Turks prefer potatoes for breakfast, Zanzibar people still prefer fish. The people of Zanzibar, who usually prefer to eat two meals a day, said they consume fruits more in the form of fruit juice, as their country is truly a tropical fruit paradise. They make juices from almost everything you can imagine. "Even from avocado. For example, there is a drink consisting of pineapples, mangoes and bananas, and they put avocado in it. It seemed like a very interesting mix at first, but altogether it created a very delicious taste."

Despite only beginning as a volunteer experience, Aydoğdu's African adventure soon turned into much more – an activity that combined two cuisines and brought together the dishes of two cuisines on a single table. CafeAfrica served as a means to reduce this distance and differences and combine them harmoniously. It gives us a good opportunity to find the tastes of places we may never even have the opportunity to go to, especially for those constantly hunting something new. Maybe we may not be able to actually go to Zanzibar and taste their meals on the spot, but we can always feel the Zanzibar breeze in CafeAfrica in Istanbul. That unique taste you've been searching for so long may, in fact, belong to one of these 12 tribes. But how can you know without tasting? Bon appetit or as they say in Swahili "karibu chakula."