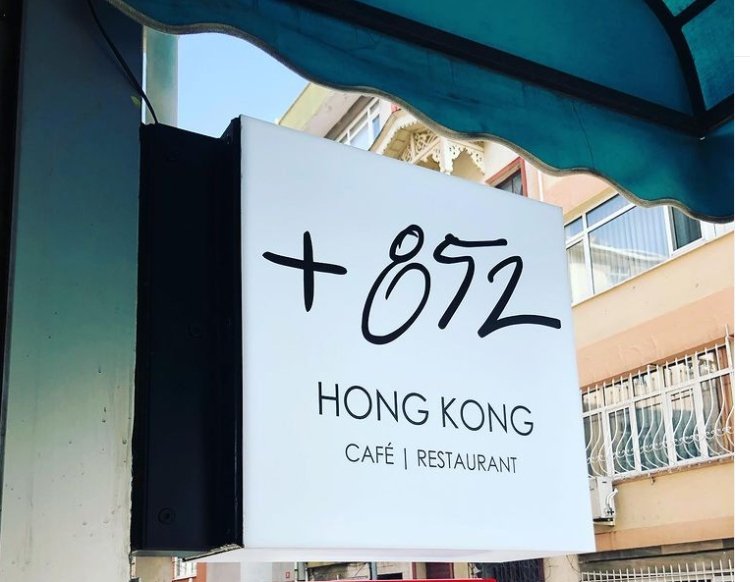 A new restaurant in Kadıköy, 852 Hong Kong, is an authentic kitchen specializing in dim sum, handmade noodles and Chinese teas, with a range of appetizing delicacies for everyone from vegans to carnivores

The kitchen at 852 Hong Kong is open, and welcoming, as its cooks labor over deep, darkened woks, carefully preparing a smorgasbord of specialties while dancing flames burst upward from their busy stovetops. The clank of pots is only outmatched by the laughter of guests and the warmth of their culinary hosts. The restaurant, which opened just before the pandemic struck in Turkey, is a perfect cultural getaway within the city for those foodies who might be wary of traveling to the far-flung destination where its recipes were born.

No global city is complete without quality Asian food. If there is anything that globalization will have improved, it is the taste of fried rice and steamed dumplings wherever people are walking the streets in search of world cuisine. There is a distinctive blend of palates that Hong Kong food inspires, however, which is utterly unique in comparison to its neighbors in China, Japan, Korea, and the list goes on, tantalizing with palates that are unmistakably vital to the world’s most beloved sources of nourishment.

As an eatery serving dim sum, 852 Hong Kong has a fantastic diversity of appetizers. Typically, families from Chinese-speaking communities would meet for dim sum on Sundays, and gab about their week, their families, jobs and hobbies surrounded by many generations, feasting over a steady supply of snack-friendly food items, generally meat-rich bites of any and all kinds, shapes and textures. Anyone who has ever spent a significant amount of time in a Chinatown district in America, for example, will be familiar with the delicious pastimes.

At 852 Hong Kong, there are cakes of taro root, an ingredient rarely found in Turkey, or anywhere outside of Asian food markets. Although a root vegetable, like a carrot, it has a light, even saccharine quality to it, and when sugared it is used to fill dessert-style white bread buns. The savory, fried taro cakes at 852 Hong Kong are akin to their variation in turnips, which they might have more often, seeing as how taro is hard to get in and around Anatolia. It is the case that there is a fine art to frying that is fundamental to their dishes.

Together with spring rolls with different fillings, and black-and-white mushroom salad, among other wide-ranging choices, the beginning of any lunch or evening at 852 Hong Kong is sure to satisfy. Where they shine is in the craft of their handmade noodles, thick, oily strings flecked with chili and garlic within a bowl of sliced vegetables. They also serve a thinner, clear rice noodle that is as scrumptious, perfect for a blustery winter night. And washed down with a Hong Kong-style milk tea, their kitchen is a fantasy of extraordinary delights.

In the spirit of togetherness

There is a precious ambiance at 852 Hong Kong, a little storefront of a restaurant on the ground floor of a side street near Saint Joseph’s High School in Kadıköy. With only a very modest space for a few tables, young families and rosy-cheeked couples sit next to each other over steaming plates as they’re greeted by a smiling chef from Hong Kong and the chief waiter, her husband. The familial tone is palpable as they exude a genuine joy providing Istanbul with a different source of sustenance, one that is as interesting as it is jovial.

And once through its entryway, there is a wooden bookshelf replete with knickknacks and memorabilia that are reminiscent of Hong Kong culture, from mahjong pieces to chopsticks and imported foods. They sell homemade garlic oil, along with a selection of fine green teas. One of them is a flower blossom that blooms when steeped in a pot of hot water. The metaphor of cooking and its magic is evident as the pink petals float in the wavy liquid, simply because it is warm and in the right environment.

For a sweet tooth, 852 Hong Kong is a good place to try new things. One of the items on its fixed menu is a red bean bun, which has an indulgent texture, pleasant and nutritious. Their lemon tart and matcha brownie are surprisingly thrilling after a spicy sup. It would appear that the traditionally Western sensibility of dessert is just not the same in Hong Kong, but for weary world-travelers, their vegetarian, peanut-based “Hong Kongese French Toast” might do the trick of fulfilling a loner’s belly over the holidays.

A curious addition to their menu is the imitation shark fin soup. This marks their establishment as wholly authentic. In Canada, and elsewhere around the world where people of Hong Kong have resettled, there is often a political debate around the cooking of shark fins, which is generally a wedding delicacy in Hong Kong but exploits shark fisheries in the extreme, leaving populations of the keystone species finless. 852 Hong Kong shows itself as an upright and environmental place of business by preparing a mightily refreshing, tasty vegan version.