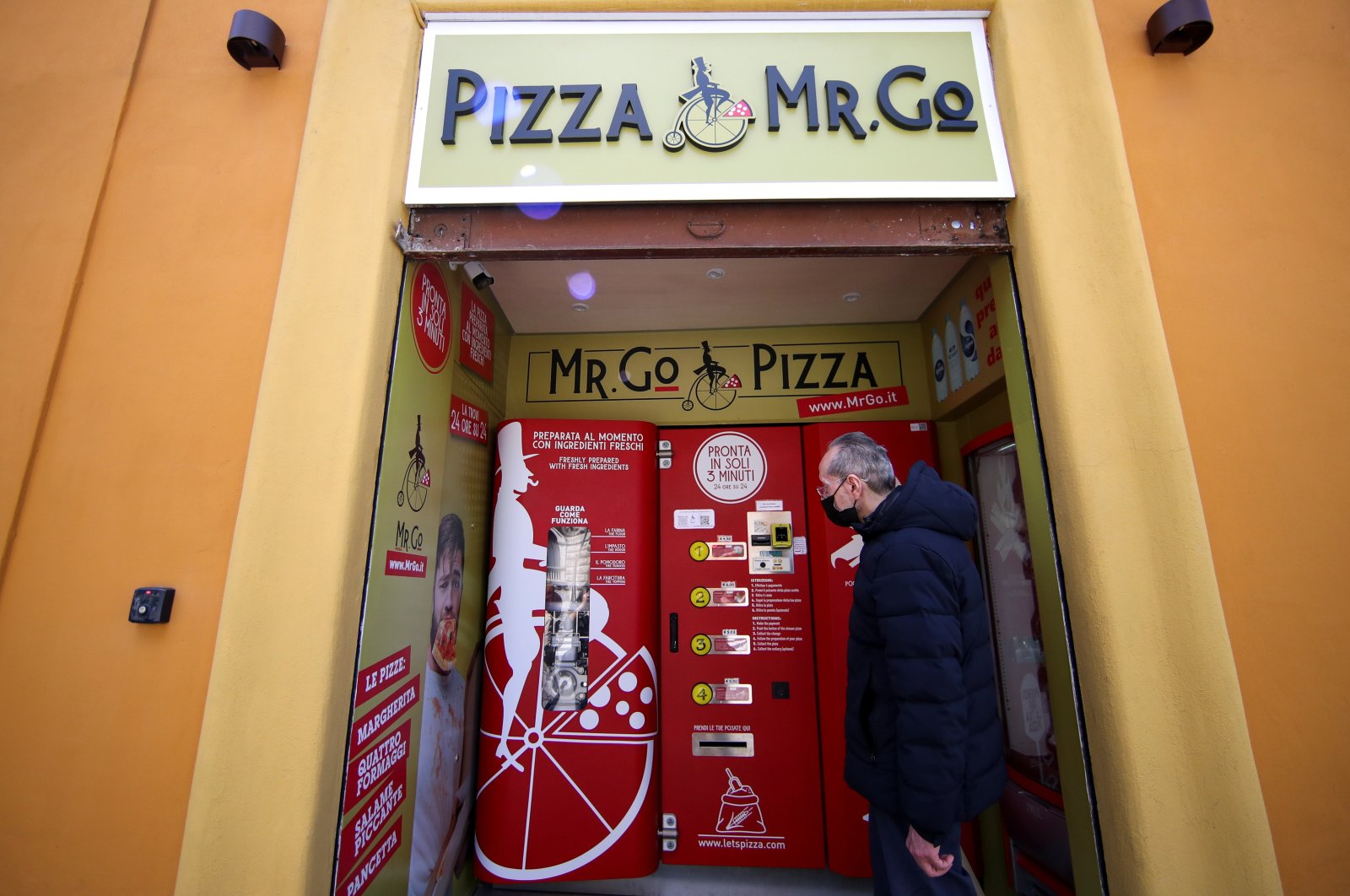 Claudio Zampiga waits for his order at the first automatic pizza vending machine, which is capable of kneading, seasoning and cooking the pizza in three minutes, in Rome, Italy, May 6, 2021. (Reuters Photo)
by Reuters May 07, 2021 11:52 am
RECOMMENDED

Jon Stewart, American comedian and former host of Comedy Central's satirical news program The Daily Show, once famously went on a long and hilarious rant about unusual “pizza.” A new invention hailing from the birthplace of pizza, Italy, the vending machine serving freshly baked pizzas in just three minutes would probably give Stewart a heart attack.

Buyers using Rome's new flaming red "Mr. Go Pizza" machine can choose from four different kinds of pizzas costing from 4.50 to 6 euros ($5.2 to $7.2). The machine kneads and tops the dough and customers can watch the pizza cook behind a small glass window.

Reviews by customers on Thursday of the machine, one of the first in Rome, ranged from "acceptable if you're in a hurry" to outright horror.

"It looks good but it is much smaller than in a restaurant and there is less topping," Claudio Zampiga, a pensioner, told Reuters.

People have been eating forms of flat bread with toppings for millennia, but it is generally accepted that pizza was perfected in Naples, where it was a street food for the poor.

Raffaele Esposito, the 19th century Neapolitan, is credited with inventing Italy's most famous type of pizza. Tradition holds that Esposito created the classic "Pizza Margherita" on June 11, 1889, to honor the queen consort, Margherita of Savoy, during her visit to Naples with King Umberto I.

He used tomatoes, mozzarella and basil leaves to represent the colors of the flag of a just united Italy, red, white and green. A plaque is affixed to a wall in Naples saying "Pizza Margherita was born here."

Fabrizia Pugliese, a Naples native and university student in Rome, gave the machine-made pizza a try and gave it a thumbs down, saying it tasted more like a "piadina," an ultra-thin soft unleavened bread wrap popular in northern Italy. "It's OK but it's not pizza," was her verdict.

Gina, a pensioner who declined to give her surname, rejected the concept outright. "Terrible. Pizza really needs to be eaten hot, immediately. This doesn't work for me," she said.

In fact, for many Italians, the classic pizza experience includes watching a "pizzaiolo," (pizzamaker) knead the dough and cooking it in a wood-burning brick oven within sight of your table.

In its current location, at least, the "Mr. Go Pizza" machine will face stiff competition getting a slice of the market. Nearby is the Napolitano restaurant, which uses a brick oven.

"I wouldn't even think of eating a pizza made by a machine," said Giovanni Campana, biting into one.

Esposito, who made a pizza fit for a queen 132 years ago, would likely agree.