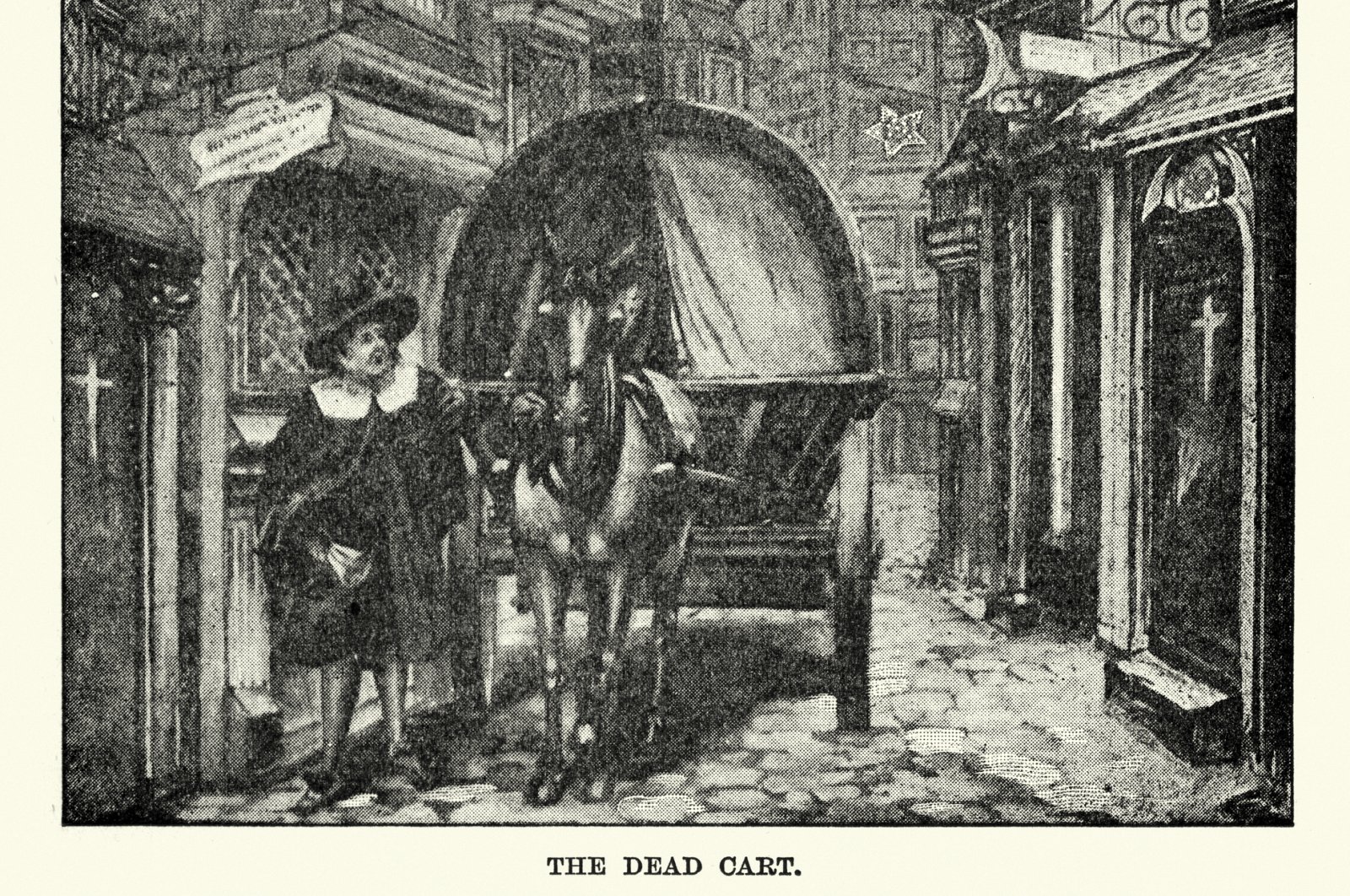 Vintage engraving of a death cart collecting the bodies of victims during the Great Plague of London. (iStock Photo)
by Daily Sabah with Wires Mar 10, 2020 11:25 am
Edited By Yasemin Nicola Sakay

Before the novel coronavirus, many momentous epidemics and pandemics altered the course of human history, killing large percentages of the global population. Compared with its predecessors, COVID-19 may seem pretty tame and not as deadly; however, it could soon be classified a pandemic if it continues its rapid spread

The newest strain of coronavirus, which originated in China and has now spread to 80 countries, is showing no signs of slowing down. The viral outbreak has now killed over 4,000 people and infected more than 114,000 others globally, according to the latest statistics announced by authorities.

The World Health Organization (WHO) has named the illness COVID-19, referring to its origin late last year and the coronavirus that causes it.

The sudden outbreak is a reminder that throughout history, mankind has survived many similar epidemic diseases that have caused huge numbers of death and suffering. Many of the worst worldwide outbreaks have killed millions.

The plague has killed by far the most people – claiming tens of millions of lives around the world. Throughout history, plague epidemics have erupted in several eras, becoming known under different names such as Athens, Antoninus, Cyprus and Justinianus.

About a third of Europe’s population was wiped out in the 14th century by bubonic plague, also known as the Black Death because it forms black spots on the skin, making it one of the deadliest recorded in human history.

Black Death, which caused great destruction across Europe between 1347 and 1351, is estimated to have killed 75 million to 100 million people. The epidemic started in southwest Asia and reached Europe in the late 1340s.


Three centuries later, between 1647 and 1652, bubonic plague swept into Spain. Some 76,000 people died in the Great Plague of Seville, about a quarter of the Andalusian city's population at the time.

The plague is caused by Yersinia pestis, a bacterial disease spread by the fleas of rats. It still kills between 100 and 200 people a year. Its symptoms are varied, ranging from boils that erupt under the armpits to lumps as big as apples in the groin, oozing pus and bleeding when opened. Victims may also experience lung infections, fever and vomiting blood and develop scattered black spots across the body.

Similar to the disease caused by the Ebola or dengue viruses, viral hemorrhagic fevers (VHF) are contagious, continuous and for the most part, lethal. VHF outbreaks swept through Mexico between 1545 and 1548 and killed an estimated 5 million to 15 million of the native population, making it the worst disease epidemic in the country's history. Characterized by high fevers and bleeding, the mysterious illness came to be known as "cocoliztli," by the native Aztecs, or the Great Pestilence.

Cocoliztli turns urine shades of green and black, changes the body's eyes and skin to a sallow yellow color and makes tongues dry and black. The infected individual soon goes delirious and has seizures. Hard and painful lumps behind the ears accompany chest and abdominal pain, violent tremors and dysentery. The Spanish were to blame for the spread of the disease, along with smallpox and measles, to the indigenous population after they came to plunder the region.

Derived from the Vibrio cholerae bacteria, the disease starts as an intestinal infection. Cholera is transmitted by consuming food or drinking water contaminated by feces in sewage. Outbreaks can develop quickly into a crisis where sanitation systems are disrupted. It causes severe diarrhea, dehydration and can kill within hours if left untreated.

Cholera still affects many people today, with the WHO reporting 1.3 million to 4 million cases annually.

Smallpox is a febrile, severe and infectious disease, seen in all ages and sexes, showing up as large fluid-filled pustules on the face and all over the body that scabbed over and often left behind ugly scars. It was the most common cause of deaths in history, killing 30% of those infected.

There were two types of smallpox: variola major and variola minor. The disease, which was spread between people or via contaminated objects, was more commonly seen in children.

The last naturally occurring case of smallpox was diagnosed in October 1977, and the WHO declared its global eradication in 1980.

There were various typhus epidemics throughout history, but perhaps one of the most notable outbreaks was in 1848 when the infectious disease killed over 20,000 people, mainly Irish immigrants who had fled to Canada to escape the Great Irish Famine. A raging fever, red spots over the arms, back and chest, delirium, gangrenous sores accompanied by the smell of rotting flesh were its symptoms.

Much later, during World War I the disease ran rampant among the armies of the Eastern Front, with an estimated 150,000 dying in Yugoslavia alone. Three million people are also thought to have died from typhus during the Russian Civil War, with 25 million to 30 million cases reported in 1922, considered the peak of the epidemic in Soviet territory.

Spanish flu or influenza was caused by a deadly subtype of the H1N1 virus in 1918-1920. The Spanish influenza is considered the worst in modern history, killing an estimated 50 million to 100 million people in just 18 months. Some 500 million were estimated to be infected by the virus, and its spread was exacerbated by the ongoing war. The disease was also prevalent during the last months of World War I and is thought to have played a role in ending the four-year conflict. Unlike other flu viruses that mainly afflict the elderly and children, the Spanish flu pandemic struck young adults and people without immune system problems. Its symptoms included chills, fatigue, nausea, sneezing, wheezing and coughing. After developing nasty fevers and diarrhea, the sick person's lungs filled with fluid, turning their skin blue.

Human immunodeficiency virus (HIV) causes a spectrum of conditions in those infected, leading to acquired immune deficiency syndrome (AIDS). About 35 million people have died from AIDS – or HIV-related illnesses since 1981, including 940,000 in 2017. Around 36.9 million people worldwide were reported to be HIV positive in 2014.

A report citing the Global Burden of Disease Study 2015 (GBD 2015) published in the journal The Lancet estimates that HIV infections reached their peak in 1997 with 3.3 million patients. The WHO says South Africa has the largest HIV epidemic in the world with more than 7 million people living with the illness.

HIV destroys a certain type of white blood cell that plays a major role in your immune system. The virus gradually weakens your natural defenses, causing signs and symptoms to occur as time goes on. HIV can be transmitted through unprotected sexual intercourse, intravenous drug use and the common use of injectors, infected blood transfusions, from mother to baby during pregnancy, childbirth or breastfeeding after childbirth.

Severe acute respiratory syndrome (SARS) caused Asia and Canada to fall into chaos between 2002-2003. Caused by the highly infectious coronavirus SARS-CoV, the disease quickly spread to 37 countries globally within a matter of weeks. SARS symptoms included fever, chills and body aches and usually progressed to pneumonia.

The SARS epidemic that began in Hong Kong between November 2002 and July 2003 almost became a pandemic after claiming 922 lives, with 8,422 confirmed cases worldwide. The WHO announced the mortality rate as 10.9%.

SARS was contained in 2003, and no cases of SARS have been reported since 2004. The spread of SARS has been completely prevented, but unlike smallpox, it is still premature to talk about its eradication. Health experts fear that the virus still may exist as a natural main reservoir in some animal populations and cause illnesses in humans in the future.

Caused by the H1N1 influenza virus, swine flu infected its first known victim in central Mexico in March 2009. By April it had reached California, infecting a 10-year-old, and then quickly spread around the world, triggering fears and mass panic. The fears reflected the unusual nature of the virus, which contained bits and pieces of bird, swine and human flu viruses, a combination never before detected.

Just like other types of flu, the disease showed itself in the form of fever (but not always), chills, body ache, cough, sore throat, runny or stuffy nose and watery, red eyes.

Ebola virus was first detected in 1976. Its suspected origin is forest bats. It is not an airborne virus but is transmitted through blood, vomit, diarrhea and other bodily fluids. Symptoms generally appear between two and 21 days after infection, and recovery greatly depends on the patient’s immune response. People who recover from Ebola develop antibodies that last for at least 10 years.

The virus appeared in Wuhan, China, in late 2019. The new type of coronavirus, which presents itself with symptoms such as high fever, cough and subsequent pneumonia, has spread rapidly and affected the whole world.

However, especially considering the deadly infectious diseases of the past, the novel coronavirus is nowhere near as dangerous nor as fatal as its predecessors. COVID-19 currently has a mortality rate of 3.4%. The fact that it spreads like wildfire is what makes it dangerous, though. Officials have not classified the outbreaks as a pandemic yet, but there is fear the number of infections is severely underreported.