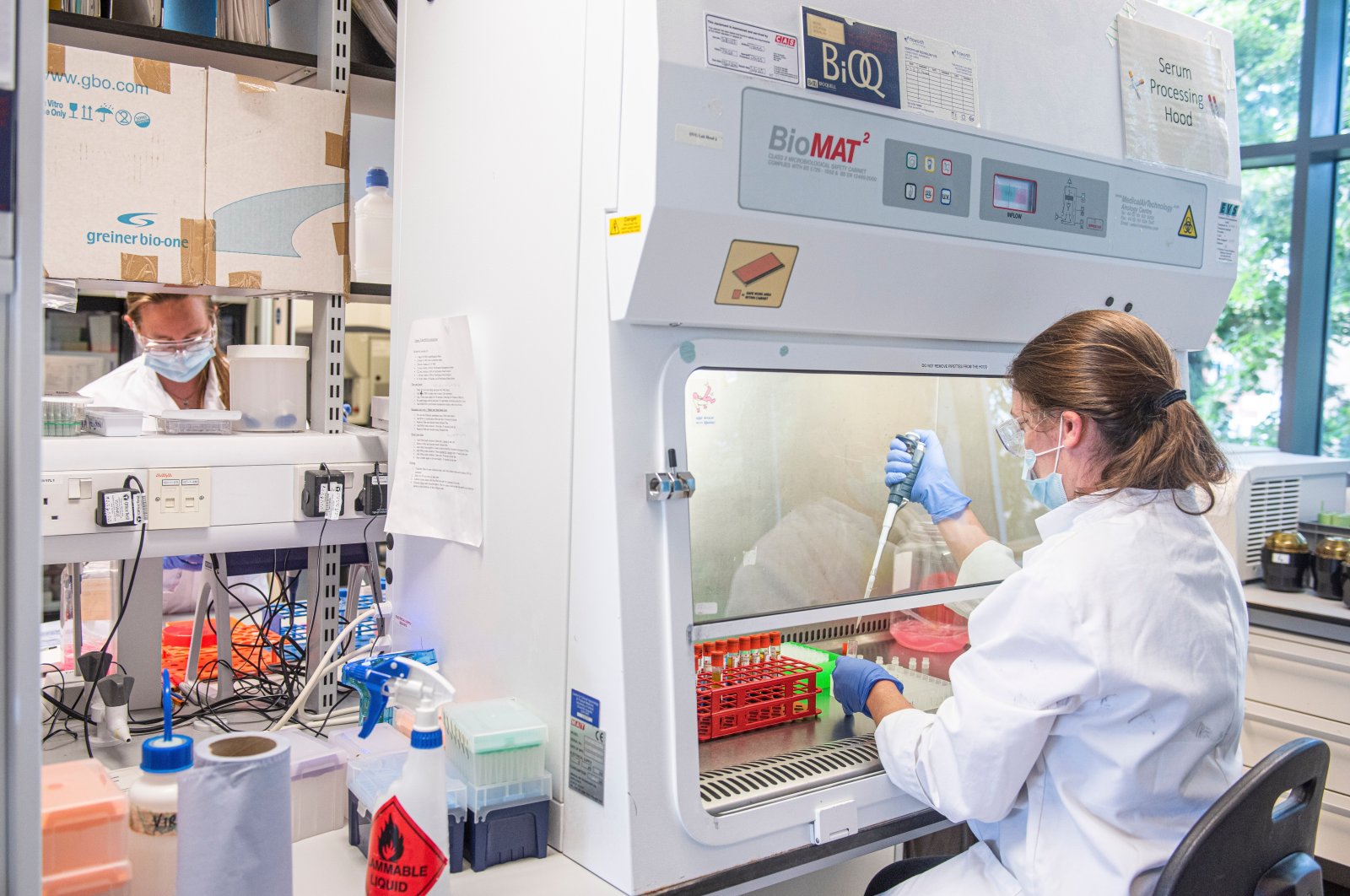 In this handout photo released by the University of Oxford samples from the coronavirus vaccine trials, from various parts of the country, are handled inside the Oxford Vaccine Group laboratory in Oxford, England Thursday June 25, 2020. (AP Photo)
by Agencies Jul 20, 2020 6:08 pm
Edited By Emre Başaran
RECOMMENDED

The first trial among more than a thousand adults in Britain found that the vaccine induced 'strong antibody and T cell immune responses' against the novel coronavirus.

The studies, published in The Lancet medical journal, constitute a major step on the road towards a COVID-19 vaccine that is effective and safe for widespread use.

The authors of the studies said they encountered a few adverse side effects from the vaccine candidates.

They did however caution that more research was needed, particularly among older adults, who are disproportionately at risk of dying of COVID-19.

Co-author Sarah Gilbert from the University of Oxford said the results "hold promise."

"If our vaccine is effective it is a promising option as these types of vaccine can be manufactured at large scale."

The pandemic has seen an unprecedented mobilization of funding and research to rush through a vaccine that can protect billions of people worldwide.

Both studies were phase-2 trials, which test whether the vaccine provokes an immune response and can be well tolerated by patients.

For its trial, the team at Oxford used a genetically modified strain of the common cold virus that infects chimpanzees.

They manipulated the virus to train cells to recognize the viral spike protein, which helps teach the immune system to recognize COVID-19.

As well as developing antibodies in their blood, patients given the vaccine were found to have developed a robust T cell response — helping their body identify and neutralize the virus.

"The immune system has two ways of finding and attacking pathogens — antibody and T cell responses," said Andrew Pollard, a member of the Oxford team.

"This vaccine is intended to induce both, so it can attack the virus when it's circulating in the body, as well as attacking infected cells."

The Oxford team found that among the 500 or so patients given the vaccine, their immune response peaked around 14 days and decreased slightly by day 56 — the end of the study period.

The other 500 patients were instead given the meningitis vaccine as a placebo.

“We are seeing good immune response in almost everybody,” said Dr. Adrian Hill, director of the Jenner Institute at Oxford University. “What this vaccine does particularly well is trigger both arms of the immune system,” he said.

Hill said that neutralizing antibodies are produced — molecules that are key to blocking infection. In addition, the vaccine also causes a reaction in the body's T-cells which help to fight off the coronavirus.

The experimental COVID-19 vaccine caused minor side effects like fever, chills and muscle pain more often than in those who got a control meningitis vaccine.

Hill said that larger trials evaluating the vaccine's effectiveness, involving about 10,000 people in the U.K. as well as participants in South Africa and Brazil are still underway. Another big trial is slated to start in the U.S. soon, aiming to enroll about 30,000 people.

How quickly scientists are able to determine the vaccine's effectiveness will depend largely on how much more transmission there is, but Hill estimated they might have sufficient data by the end of the year to decide if the vaccine should be adopted for mass vaccination campaigns.

Two groups of patients were given either a high or low dose of the vaccine.

More than 90% of people in both groups showed either antibody or T cell immune responses between 14-28 days post-vaccine.

Side effects in both trials were moderate but authors of the Chinese study said they needed to test vaccine safety on older patients.

"Elderly people ... are an important target population for a COVID-19 vaccine," said Wei Chen, from the Beijing Institute of Biotechnology.

"It is possible that an additional dose may be needed in order to induce a stronger immune response in the elderly population."

Numerous countries including Germany, France, the Netherlands, Italy, U.S. and the U.K. have all signed deals to receive hundreds of millions of doses of the vaccine — which has not yet been licensed — with the first deliveries scheduled for the fall. British politicians have promised that if the shot proves effective, Britons will be the first to get it.