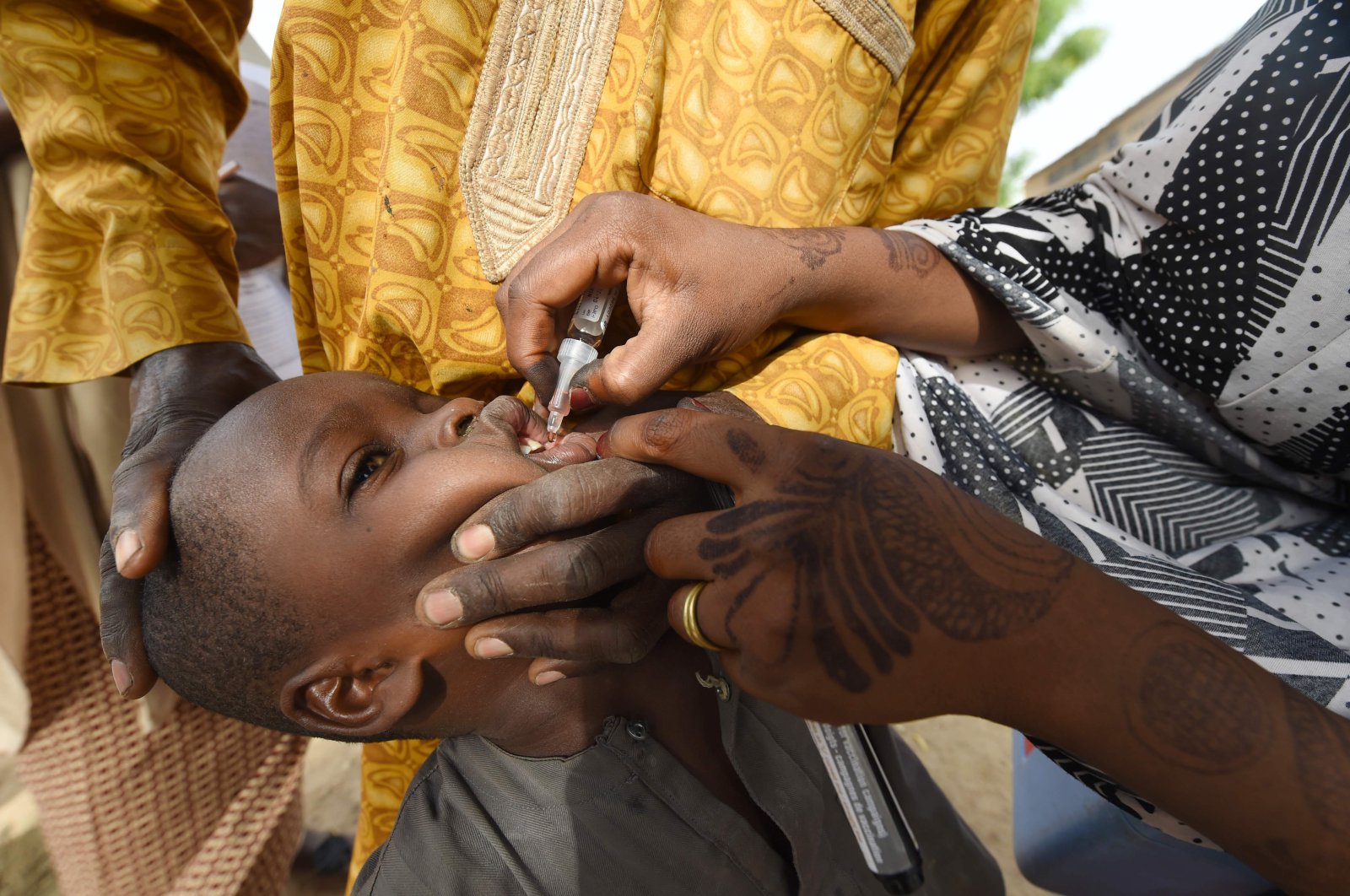 In this file photo taken on April 22, 2017, a health worker administers a vaccine to a child during a vaccination campaign against polio at Hotoro-Kudu, in the Nassarawa district of Kano, northwest Nigeria. (AFP Photo)
by French Press Agency - AFP Aug 25, 2020 12:05 pm
RECOMMENDED

The World Health Organization (WHO) is set to certify on Tuesday that the African continent is free from wild polio, four years after the last cases appeared in northeastern Nigeria.

"Thanks to the relentless efforts by governments, donors, frontline health workers and communities, up to 1.8 million children have been saved from the crippling lifelong paralysis," the WHO said in a statement.

The official announcement is due at 3 p.m. GMT in a videoconference with WHO Director-General Tedros Adhanom Ghebreyesus and key figures including philanthropist and Microsoft founder Bill Gates.

"Happiness is an understatement. We've been on this marathon for over 30 years," said Tunji Funsho, a Nigerian doctor and local anti-polio coordinator for Rotary International.

He said it marked a crucial step in the total eradication of the illness at the global level.

"It's a real achievement, I feel joy and relief at the same time," he added.

Poliomyelitis, or "wild polio," is an acutely infectious and contagious disease that attacks the spinal cord and causes irreversible paralysis in children.

It was endemic around the world until a vaccine was found in the 1950s, though this remained out of reach for many poorer countries in Asia and Africa.

Thanks to a rare instance of collective global effort and financial backing – some $19 billion over 30 years – only Afghanistan and Pakistan have recorded cases this year: 87 in total.

Nigeria, a country with 200 million inhabitants, was still among the trouble spots in the early 2000s.

In its northern Muslim-majority areas, authorities were forced to stop vaccination campaigns in 2003 and 2004 by terrorists who claimed it was a vast conspiracy to sterilize young Muslims.

It took a huge effort in tandem with traditional chiefs and religious leaders to convince populations that the vaccine was safe.

"People trust their local traditional leaders who live with them more than the political leaders," said Grema Mundube, a community leader in the town of Monguno, in the far north of Nigeria.

"Once we spoke to them and they saw us immunizing our children, they gradually accepted the vaccine," he told Agence France-Presse (AFP).

However, the emergence of violent terrorist group Boko Haram in 2009 caused another rupture in the program. In 2016, four new cases were discovered in Borno state in the northeast in the heart of the conflict.

"At the time, we couldn't reach two-thirds of the children of Borno state – 400,000 children couldn't access the vaccine," said Funsho.

The security situation remains highly volatile in the region, with the terrorists of Boko Haram and a local Daesh affiliate controlling vast areas around Lake Chad and the border with Niger.

"International agencies, local governments, donors – all partners took the bull by the horns to find new strategies to manage to reach these children," said Dr. Musa Idowu Audu, coordinator for the WHO in Borno.

In these "partially accessible" areas, vaccination teams worked under the protection of the Nigerian army and local self-defense militias.

For areas fully controlled by the terrorists, the WHO and its partners sought to intercept people coming in and out along market and transport routes in a bid to spread medical information and recruit "health informants" who could tell them about any polio cases.

"We built a pact of trust with these populations, for instance by giving them free medical supplies," said Audu.

Today, it is estimated that only 30,000 children are still "inaccessible": A number considered too low by scientists to allow for an epidemic to break out.

Despite the "extreme happiness and pride" felt by Audu, he never fails to remember the 20 or more medical staff and volunteers killed for the cause in northeast Nigeria in recent years.

The challenge now is to ensure that no new polio cases arrive from Afghanistan or Pakistan and that vaccinations continue to ensure that children across the continent are protected from this vicious disease.

"Before we couldn't sleep at all. Now we will sleep with one eye open," Funsho said.